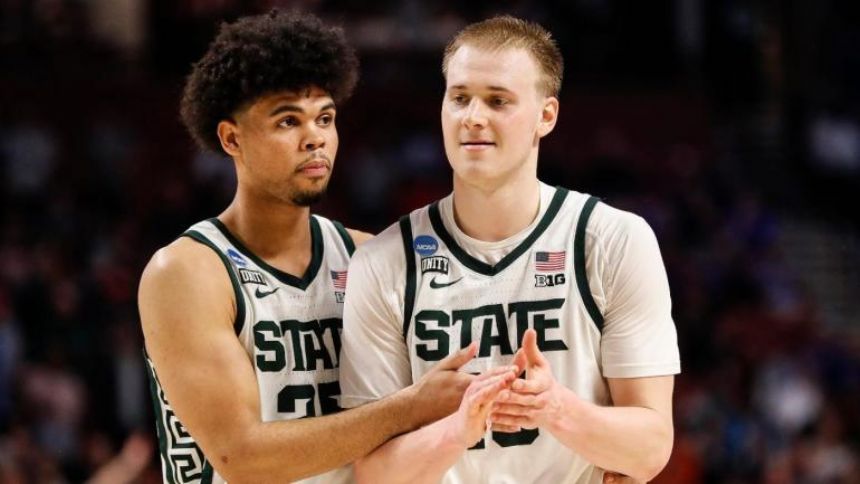 At first glance, Michigan State's losses from its 2021-22 roster appear minimal, as the Spartans bid farewell to just one double-digit scorer from a 23-13 squad that exited the NCAA Tournament with a second-round loss to No. 2 seed Duke. But a deeper look reveals a slightly more uncertain perspective for a program that is just .500 in Big Ten play over the past two seasons as legendary coach Tom Izzo prepares for his 28th season on the MSU bench with a .

The Spartans lose their top-three scorers from last season's roster, their top shot-blocker and their leading rebounder. While seven of last season's 11 minutes leaders return, just 10 scholarship players are part of a roster that looks a bit lean on physicality amid the departures of bigs Marcus Bingham and Julius Marble along with well-sized wings Max Christie and Gabe Brown.

But here's the upside: eight of Michigan State's 10 scholarship players are former top-100 prospects, one is a proven mid-major transfer and the other is a true freshman who shouldn't be needed early in his career. Izzo, being the masterful orchestrator that he is, has more than enough clay to mold the program's 25th consecutive NCAA Tournament team. Once he gets there, anything can happen, as evidenced by the eight Final Four appearances the Spartans have made during Izzo's tenure.

As the 2022-23 college basketball season creeps nearer, here's a glimpse at how Michigan State's starting lineup and rotation could shape up.

6-0 | 175 | Sr.
It took him some time, but Walker ultimately developed into a steady hand for the Spartans in 28 starts last season after transferring following two years at Northeastern. After averaging 2.4 turnovers per game in his first 20 contests, he turned it over just 1.1 times per contest in the final 16 games as Izzo refined his point guard rotation. Playing Walker and Hoggard together could be a jolt for the Michigan State offense in 2022-23 if Izzo can find a way to offset the potential negatives on the defensive side.

6-4 | 210'| Jr.
Hoggard made a significant leap as a sophomore in 2021-22 and claimed a starting role for a chunk of the season's second half. He finished fourth in the Big Ten with 4.8 assists per game despite playing significantly fewer minutes than the players ahead of him in the category. He should see an uptick on the 20.2 minutes per game he played last season and have a chance to become a double-digit scorer. His biggest limitation is a career 20% 3-point shooting mark.

6-8 | 225'| Sr.
Hall has the hallmarks of a Big Ten breakout candidate after registering the Spartans' highest overall BPR figure, per Evanmiya.com last season. In essence, he was Michigan State's best two-way player in 2021-22 while hitting 42.6% of his 3-point attempts. Hall has been up and down throughout his career and was particularly quiet in the 2022 postseason. But he should be in great position for a consistent starting role on this roster, provided that he feels comfortable on the wing. Gabe Brown was in a similar situation entering last season -- at least from a production standpoint -- and used a solid senior year to land an exhibit 10 deal with the Raptors as an undrafted free agent. Hall could do the same this season.

6-9 | 230'| Redshirt-Sr.
Hauser will be in his fourth season with the Spartans and third as an eligible player after transferring in following a standout freshman season at Marquette in 2018-19. He hasn't developed a ton over the course of his career, but he dramatically cut down on his turnovers last season and produced some huge outside shooting performances. As a career 39.1% 3-point shooter, Hauser is a mismatch for some defenses at his size. At this point he qualifies as the team's savvy veteran.

6-9'| 235'| Jr.
After averaging 4.9 minutes over 55 appearances in his first two seasons, Sissoko should be in line for a larger role this season -- potentially even as a starter -- since Michigan State will need his physicality on the interior. The former four-star prospect has logged double-digit minutes just five times in his career, and he blocked two shots in three of those games. With Bingham's rim protection out of the picture, Sissoko could become one of this team's most valuable defenders. It's easy to envision him as a 15-to-18 minutes per game player this season, though his minutes will presumably vary based on foul trouble and matchups.

6-4 | 180'| So.
Among the nine Spartans consistently in Michigan State's rotation last season, Akins ranked eighth in minutes per game with 14.8. But the former four-star prospect never fell out of the rotation during his true freshman season and occasionally produced some encouraging performances against quality opponents. Given that Hoggard and Tyson are older and further established, Akins may have some ground to make up to earn a starting role. But he should be a mainstay in the rotation.

6-6 | 225'| Soph.
With a group of guards and wings who are mostly on the smaller end, Brooks can be a change of pace because of his physicality. He appeared in 25 games as a true freshman but struggled to carve out a role amid a roster logjam that is no longer an issue. He's one of the roster's biggest mysteries because of how sparingly he played, but Brooks was the No. 64 overall prospect in the Class of 2021, per 247Sports, and he'll certainly have a chance to shine this season.

'6-9'| 250'| Fr.
Kohler should have an immediate shot at playing time for Michigan State in the 2022-23 season as the Spartans replace Bingham and Marble on the interior. When he signed last year, the four-star prospect was likened to Zach Randolph by Izzo, who described Kohler as "a guy with incredible footwork and size" while noting that Kohler "can really score the basketball."


Given how willing Izzo is to go deep into his bench, Holloman should have a good chance to play legit minutes early in his career. As a four-star prospect, he's got the talent to become a solid player for the Spartans, though other guards will likely start the season ahead of him in the pecking order. Izzo described Holloman upon his signing as "a competitive guy who can run the point, who can distribute the ball, who can guard the world." He also noted that Holloman "has improved his shooting each and every year." Anyone who can guard the world should have a place on a team that ranked a paltry 67th in defensive efficiency last season, according to kenpom.com.

Carson Cooper |'6-10 | 220 | Fr.
With just 10 scholarship players currently on the roster, Michigan State could wind up needing Cooper in a pinch. But as an overlooked area prospect who left Michigan to conclude his prep career at IMG Academy, he's got the makings of a long-term project for the Spartans.'

"He's big, skilled and strong and runs the floor really well," Izzo said when Cooper signed. "We see him as an anchor in the post and a player who can defend at the rim, but he's also got the ability to stretch the floor and has a good handle."