Mims motivated to be 'on top' of Jets' receiver depth chart 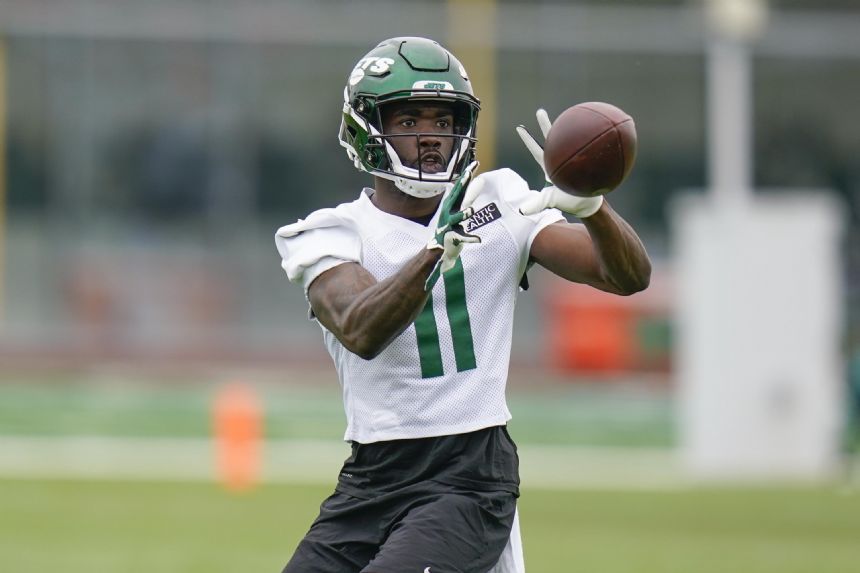 A lot has happened since. And not a lot good.

The 2020 second-round pick out of Baylor dealt with hamstring issues as a rookie, an awful case of food poisoning that caused him to lose 20 pounds last offseason, a bout with COVID-19 last season and seeing his role in the offense dwindle to nearly non-existent.

And during that time, there was a lot of chatter - mostly by frustrated fans and puzzled media, all wondering what happened to the player the Jets thought they were getting.

"Everyone's gonna talk," Mims said after practice Friday. "It's up to you if you let that bother you. I don't (go) on social media like that. I don't pay no attention to that (stuff).

"I'm just going to continue to do what I need to do, honestly."

Mims has played in just 20 games - including 11 starts - in two NFL seasons, catching 31 passes for 490 yards and zero touchdowns. His slide down the team's depth chart at wide receiver has been glaring, and he's below Corey Davis, Elijah Moore, Garrett Wilson, Braxton Berrios and Jeff Smith in training camp.

Mims' roster spot is far from guaranteed. But the 24-year-old receiver has grand goals for himself - the same as he had the moment his name was called with the 59th overall pick in the draft.

"Hopefully I see myself on top," he said. "I mean, I feel like I put in enough work to be there. That's the coaches' decision, but I'll continue to work my tail off and do everything I can."

Mims doesn't mean just being part of a rotation, either.

"A starting receiver," he said. "That's my goal. That's my only goal."

His confidence has not waned, even if everyone else's in him has. Mims says he feels a lot better this summer than he did last season.

"I just think, shoot, I'm trying to do everything right," he said.

His health is improved and his knowledge of the playbook is on point.

When Mims was drafted by the Jets, he came to New York to play in an offense led by then-coach Adam Gase and offensive coordinator Dowell Loggains. He missed most of training camp with a hamstring injury and didn't make his debut until Week 7. He finished with 23 catches for 357 yards in nine games.

Following a coaching change in the offseason, food poisoning after eating some bad salmon set him back and he spent most of last summer trying to get up to speed physically and mentally in a new system. That comfort zone never developed as he had just eight receptions for 133 yards in 11 games, and he missed three others because of COVID-19.

There were lapses in Mims' overall game - and perhaps his focus - that prevented him from reaching his potential. Coach Robert Saleh has seen a difference, with Mims having some playmaking flashes during the early part of camp.

"He's doing a really good job," Saleh said. "He is fighting his tail off in the run game. Because he's so well-conditioned right now, he's doing things with his body in the passing game from a route-running standpoint that he hasn't been able to do in the past."

Mims also has been working extra on special teams, a role that could play in the final decisions on cutdown day in a few weeks.

"Really, really happy with the approach he's taken this offseason," Saleh said. "The way he attacked OTAs and the way he's come into training camp, where he is mentally, the coaching that he's accepting.

"He doesn't make excuses, he's just grinding and he's approaching it like a professional. And for that, I'm grateful."

NOTES: RB Tevin Coleman (illness) and TE Jeremy Ruckert (foot) made their practice debuts. ... RB Ty Johnson and DE Vinny Curry remained sidelined with hamstring injuries. ... The Jets had three minor skirmishes, but all were broken up quickly. "One rule: No punching," Saleh said. "They're going to push, they're going to shove. It's going to happen. They're sick of each other. I think I'm sick of hearing the same calls from the coordinators, and I think everyone's sick of each other at this point in camp. But we've got one more week of it before we get to go to Philadelphia (for the preseason opener) and see different humans. But rule one, protect the team, don't punch."