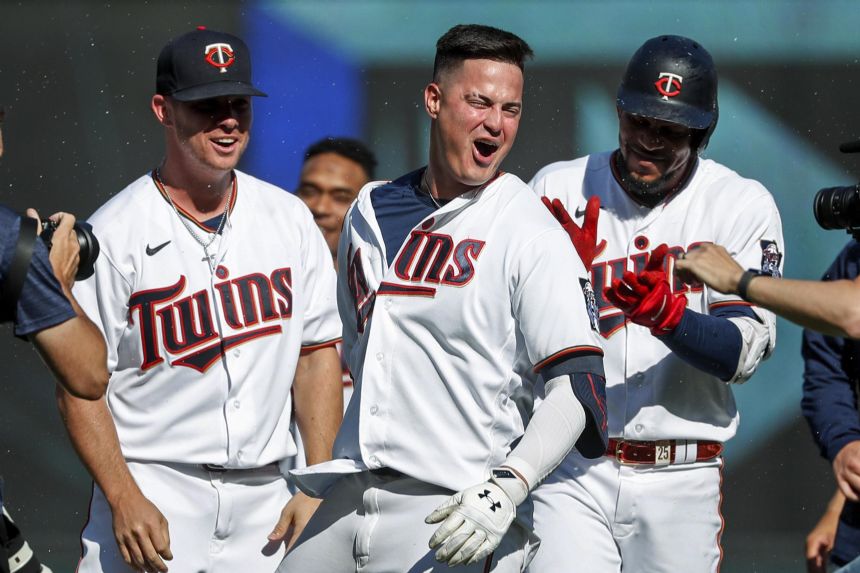 MINNEAPOLIS (AP) - Jorge Polanco hit a tying homer and Jose Miranda delivered a game-ending single as the Minnesota Twins again rallied for two runs in the bottom of the ninth inning and beat the Baltimore Orioles 4-3 Saturday.

A day after Byron Buxton hit a two-run homer in the ninth off Jorge Lopez for a 3-2 victory, Minnesota came back once more.

Polanco began the ninth with a home run against Lopez (4-4) that made it 3-all. Alex Kirilloff doubled with one out, Gary Sanchez singled and Miranda followed with a single to win it.

Miranda had entered the game in the top of the ninth at third base after Gio Urshela was pulled for a pinch-runner in the eighth.

Jordan Lyles threw 6 1/3 innings of one-run ball, giving up four hits and striking out seven. At one point, he retired 12 batters in a row.

Anthony Santander hit his 15th home run for Baltimore. Orioles star Trey Mancini was back in the lineup after being limited to pinch-hitting duties on Friday with a right hand injury and went 1 for 3.

Nick Gordon hit a solo home run in the seventh, cutting the Twins' deficit to 3-1 and finishing Lyles.

A single by Urshela and a double by Luis Arraez set up Carlo Correa's sacrifice fly.

Twins pitcher Randy Dobnak (right middle finger strain) had a setback in his recovery and received a cortisone shot in his finger on Friday 1. Dobnak has experienced several setbacks with his finger this season. He has ruptured two of the pulley tendons, with has caused strain on others tendons in the finger. He has not pitched at any level this season.

"It's been frustrating, because like I said before, the day-to-day stuff, everything is fine -- it's only when I throw," Dobnak said. "And the fact that it's gotten good to the point where I'm full go off the mound, and then it's like -- setback! What's a man got to do?"

Dobnak will rest for about two weeks before attempting to resume rehab. If all goes well, he said he could return to pitching in about six weeks.

Orioles: RHP Kyle Bradish (right shoulder inflammation) will throw off the mound Sunday for the first time since he went on the the 15-day injured list retroactive to June 21. ... INF Ramon Urias (left oblique strain) is expected to be in the lineup for Double-A Bowie as he begins a rehab assignment.

Twins: C Ryan Jeffers (right thumb contusion) was scratched from the lineup. He was injured taking warmup pitches before the first inning on Friday. He was removed from that game in the fifth inning. ... RHP Trevor Megill (right shoulder impingement) was scheduled to make his first rehab appearance for Triple-A St. Paul. He went on the 15-day injured list on June 19

LHP Devin Smeltzer (4-1, 2.86) gets the nod for Minnesota in the series finale against the Orioles. Smeltzer has allowed three or fewer runs in each of his first three home starts this season. RHP Tyler Wells (6-4, 3.23) will start for Baltimore. Wells holds a 2.16 ERA in three career appearances (one start) against the Twins.