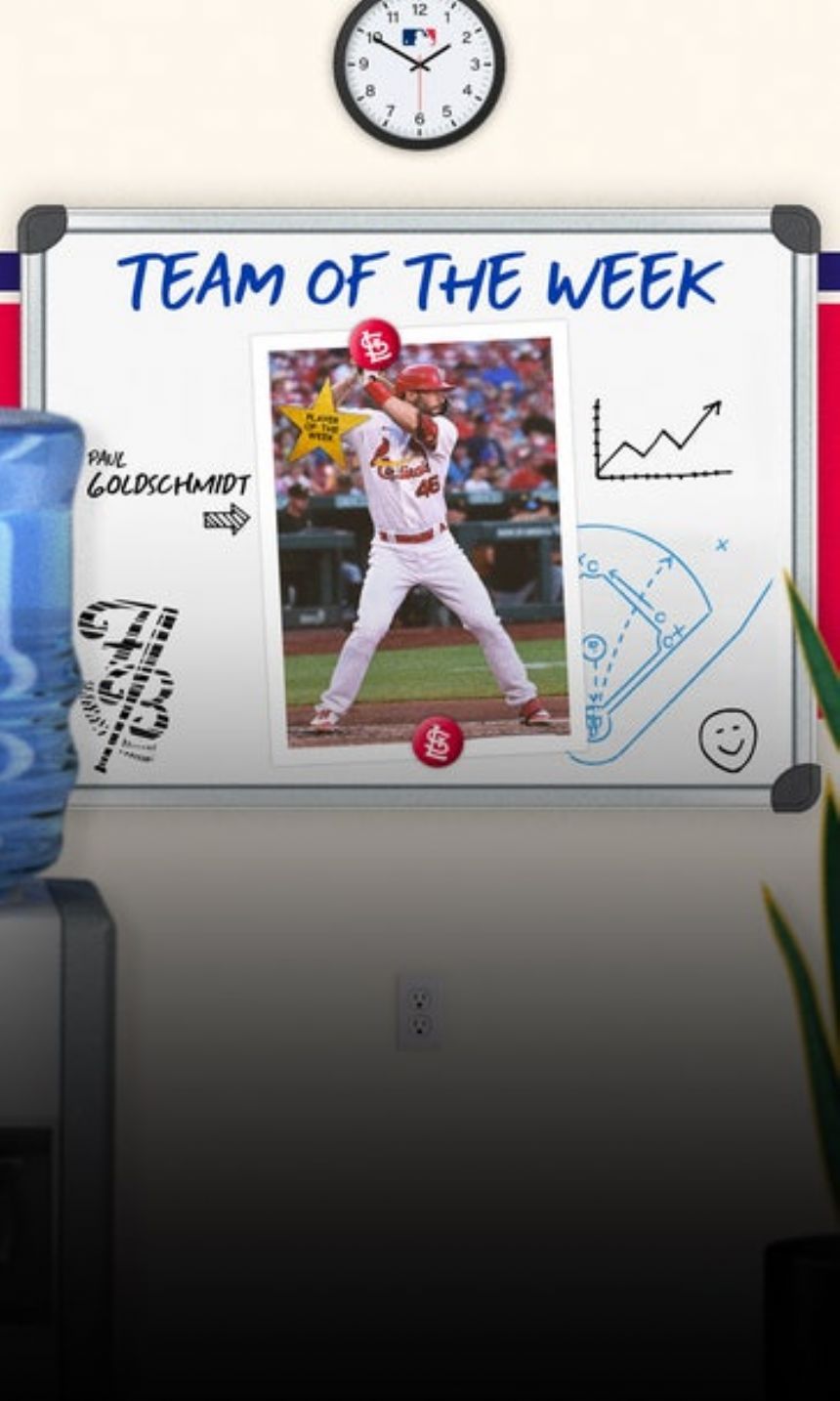 Last week, Paul Goldschmidt got a hit in half of his 26 at-bats, and he finished the week batting .500 with four home runs and 11 RBIs.'

He also had more home runs than strikeouts on the week, reached base in every game, hit three homers in a double-header on June 14 and had multiple RBIs in three of the Cardinals' games.

Goldschmidt is putting together the best season of his career, a career in which he has already finished second and third in MVP voting. Could this be the year he takes home the award? His performance this week certainly has him heading that direction.

Welcome to the MLB Team of the Week, where we highlight the players who had standout performances over the past seven days, led this week by none other than the Cardinals' first baseman.

Contreras is the only catcher in baseball with 25 or more extra-base hits. He finished this week batting .370 and added two home runs to his season total.

There was also a really cool moment for the Contreras brothers over the weekend, when the Cubs played the Braves and Willson's brother, William, came to town. It was the catching duo's first time facing each other in MLB.

Multiple rookies have come up and made a huge impact for the Cardinals this season, the most recent being Donovan. He hit a whopping .467 this week, with seven RBIs and 14 hits. (For context, 14 hits is a lot for an entire month.) Donovan has raised his season batting average to .315, good for 10th among MLB infielders.

Another week, another dominant Machado performance. Machado hit .400 this week and tacked two homers onto his season total. Unfortunately, he's going to be out for a while after suffering an ankle injury. It initially looked as if his ankle had broken, but thankfully, X-rays came back negative.

San Diego Padres third baseman Manny Machado leaves the game due to a left-ankle sprain in the first inning. X-rays were negative after the game.

Since June 1, Rosario is hitting .359 at the plate, which puts him third among MLB shortstops and ninth in the league. This week, he hit .440 and scored nine runs.

The Guardians continue to win ball games and fly under the radar during a recent stretch in which they've won 15 of 20 games and beat the Dodgers in two out of three meetings in Los Angeles.

Since Harris' first game with Braves on May 28, he is eighth among major-leaguers with at least 20 games played, with a .321 batting average. The Braves are 16-5 in that stretch after going 22-24 before it. The rookie has come up big for Atlanta and has been a much-needed shot in the arm for a team that needed a boost.'

Trout has eight home runs since June 7, which is the most in MLB. Over the weekend in Seattle, he hit five home runs, four of them go-ahead, game-winning dingers. No other player in history has done that. Since the longest hitless streak of his career, Mike Trout is back to being the best player in baseball.

It was a massive week for Blackmon. He hit .455 with six RBIs and two homers, the latter of which moved him into sixth in homers in Rockies history. He also became just the second Rockies player to reach 10 years of service in Colorado, joining Todd Helton.

This week, Mountcastle hit .419 with four home runs and nine RBIs. And he led all MLB players with 29 total bases.

Ben Verlander breaks down his MLB Power Rankings after Week 11 of the season, with the Yankees continue to hold the top spot.

After allowing eight earned runs May 15 against the Cardinals, Rodon has allowed eight earned runs in his past six starts, good for a 2.10 ERA in that span (fifth in the NL, ninth in MLB). He finished the week 2-0 with 16 strikeouts in 14 innings and not a single run given up.

Entering Sunday, Clase is one of only two closers who have pitched at least 25 innings, recorded more than 10 saves and walked fewer than five guys. The only other closer to accomplish that this season is Clay Holmes.

The Guardians are playing fantastic baseball, which has led to lots of save opportunities for their closer, and Clase took advantage of every chance last week.

Ben Verlander is an MLB Analyst for AP Sports and the host of the "Flippin' Bats" podcast. Born and raised in Richmond, Virginia, Verlander was an All-American at Old Dominion University before he joined his brother, Justin, in Detroit as a 14th-round pick of the Tigers in 2013. He spent five years in the Tigers organization. Follow him on Twitter @BenVerlander.