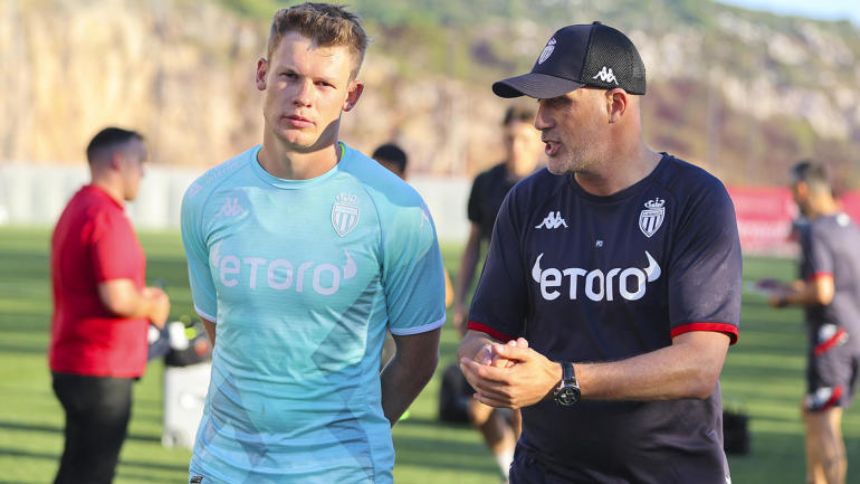 AS summer started in inevitable fashion with transfer to for approximately $80 million being confirmed shortly after the Spanish giants' latest UEFA Champions League success. With that key piece of business out of the way after enjoying a price hike for the 22-year-old toward the end of last season, the principality outfit has relieved itself of any pressure to do further business for now and is diligently approaching the summer transfer window.'

has arrived from for around $15 million after the Japan international was unable to build on a loan spell with which ended in 2021. The 22-year-old will add versatility to the Monaco attack either out wide or through the middle. Tchouameni will need replacing and Les Monegasques already tried to recruit before he joined from Brighton and Hove Albion while is also a reported target for sporting director Paul Mitchell. and have been allowed to move on after struggling to realize their potential at Stade Louis II while veterans Cesc Fabregas and have also left to raise further funds and lower the average age of the squad even more.

Here's all you need to know ??https://t.co/d9ICfWsoNX

"We are very clear in our mindset," said Mitchell earlier this summer when preseason training got underway. "That is the same for every player. We have a shareholder who is very ambitious, and who wants the best for ASM. He wants a very competitive team; it is important for him. So, to let other players go would require very, very large offers, like the one that was made for Aurelien by Real."

Philippe Clement's reign got off to a slow start, but an 11-match unbeaten run including a nine-game winning spurt at the end of the campaign ensured dramatic late Champions League qualification which will see them back in the playoffs after last season's heartbreak. Third qualifying round draw is set for July 18 where Monaco will play one of Benfica, Rangers, PSV Eindhoven, Fenerbahce or Dynamo Kyiv in August -- stream on Paramount+.

The eight-time French champions are understandably banking on that impressive consistency to continue into the approaching campaign but also recognize that European demands were part of their undoing under Niko Kovac which led to Clement's appointment after his exploits. Considering how they secured Champions League involvement on the final day of last season in Ligue 1, the goal this term is to be the team which runs Paris Saint-Germain closest and tries to capitalize on any potential slips by the current titleholders.'

Thank you @AS_Monaco
It's been an honour.
Good luck for the future ?????? pic.twitter.com/GOqJT2UCn9

"We will have to be ready," Mitchell said. "In the best physical and mental condition, in top condition, to face this major challenge. We must also use the experience of last season, and learn from that, to adapt our preseason and show our best qualities, and give our best in the moment. We will also have to rely on the growing experience of this team, one that we have been building for two years now."

Christophe Galtier's domestic track record suggests that Les Parisiens will not be too charitable on that front, but Olympique de Marseille's rocky preseason suggests that second spot could be open to the likes of Monaco, Stade Rennais or if Les Gones can get their house in order. OL have no continental distractions this time around, but ASM are one of the few French outfits who could genuinely harbor European ambitions and give Ligue 1 the boost it needs after Lyon and OM went close in the Europa League and Europa Conference League, respectively, last campaign.'

Regular Champions League soccer is needed for Monaco's project to continue to function at optimal level now that Mitchell has streamlined what was an enormously bloated squad and the club's investment in a state-of-the-art training facility should aid sustainability in the future. For now, though, the men from the principality are focused on getting off to a good start in the playoffs and not making a false start in Ligue 1 before finding their rhythm between Le Championnat and the Champions League and then challenging for Coupe de France glory.

AS Monaco finish their week in Portugal in top form! ??????

"We have just won two podiums in two seasons and have played in a final, then a semifinal of the Coupe de France, as well as a round of 16 in the European Cup," explained Mitchell. "We want to continue to develop our players, to be competitive very quickly, and not to find ourselves in the situation of the last two seasons of having to make a huge final sprint to play the leading roles. The idea is to always push the limits a little further."

It promises to be a fascinating watch alongside new direction and Monaco could re-emerge as dark horses of Europe as they were back in 2017 when they last won the French title and impressed with a deep run on the continental stage under Leonardo Jardim. Adding to the intrigue regarding this potential battle at the Ligue 1 summit is the fact that the capital club's title defense will be shaped by the man whose transfer dealings enabled Les Monegasques to prosper five years ago with Luis Campos now at Parc des Princes after a fruitful spell with OSC. Mitchell, understandably, is a wanted man in the Premier League and will likely return to England at some point soon, but he could sign off on a high having created the conditions necessary for Monaco to reestablish themselves ahead of the chasing pack just behind PSG.