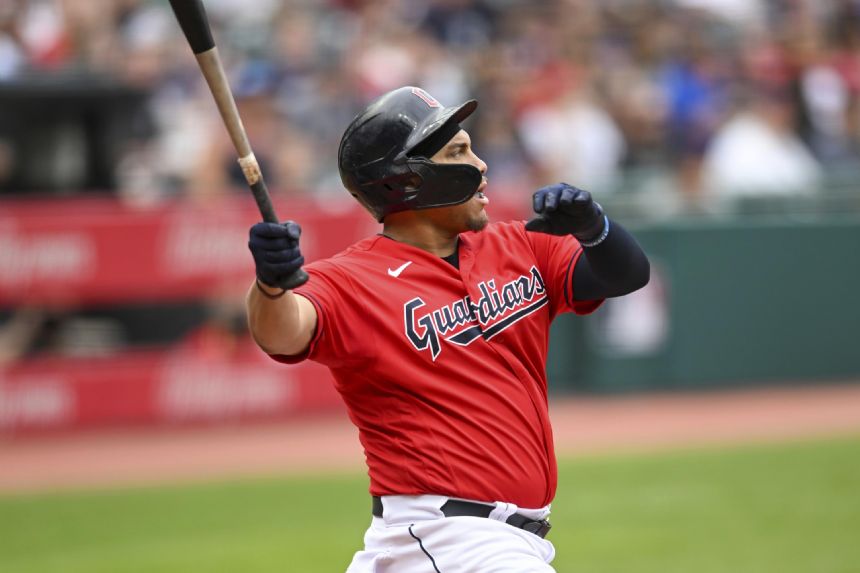 Naylor homered in the first inning off Sonny Gray (8-5) and Rosario connected in the sixth off rookie Ronny Henriquez to make it 7-3 as the first-place Guardians opened a four-game division lead.

Cleveland begins a three-game series in Chicago on Tuesday against the second-place White Sox, who were idle.

Nick Gordon homered off Quantrill (13-5) for the Twins, who came to town hoping to cut into the Guardians' lead but left further behind. Cleveland went 13-6 against Minnesota, winning nine of the last 10.

Quantrill stuck around until the sixth and improved to 13-0 in 32 starts at Progressive Field. The right-hander is one win shy of matching Vic Raschi's record for dominance in one ballpark. Raschi went 14-0 at Comiskey Park from 1947-55.

Sam Hentgen got seven straight outs for his first professional save.

Gray left after two innings with tightness in his right hamstring. Naylor put him in an early hole with his 18th homer, a no-doubt shot to right.

Rosario reached on a fielder's choice and Jose Ramirez singled before Naylor, who has done some of his best work late in games this season, guessed right and pounded Gray's 2-1 curveball 413 feet.

Rookie Steven Kwan's triple gave Cleveland a 4-0 lead in the second. His shot to right-center scored Myles Straw, who walked and took third on Gray's errant pickoff throw and when right fielder Matt Wallner overran the ball backing up.

Gordon's homer got Minnesota to 4-3 in the sixth before the Guardians got another big hit from Rosario.

Straw tripled and Kwan walked before Rosario hit his 11th homer, a line shot over the wall in left.

Minnesota's Luis Arraez went 1 for 3 and is one point ahead of Boston's Xander Bogaerts and New York's Aaron Judge, who is trying to become the first player to win the Triple Crown (homers, RBIs and average) since Detroit's Miguel Cabrera in 2012.

"How can you not?" Twins manager Rocco Baldelli said when asked if he's pulling for Arraez. "You don't want to between Aaron Judge and anything in this world. ... My money is on Luis."

Twins: Minnesota has been overrun by injuries, and the club has been without some key players for extended periods. OF Byron Buxton has been out since Aug. 23 with a strained right hip. With the team fading from the postseason race, it's possible the Twins won't bring players back this season. "I'm not eager to have those discussions right now," said Baldelli.

Guardians: The team is hoping to have RHP Zach Plesac (broken right hand) pitch in a simulated game Tuesday for Triple-A Columbus. If the timing isn't right, Plesac may have to pitch in the Clippers' game at Toledo.

Guardians: RHP Aaron Civale (2-6, 5.40) will be activated to make his first start since Aug. 28 in the series opener against Chicago's Dylan Cease (14-7, 2.16). Civale had been out with elbow inflammation.