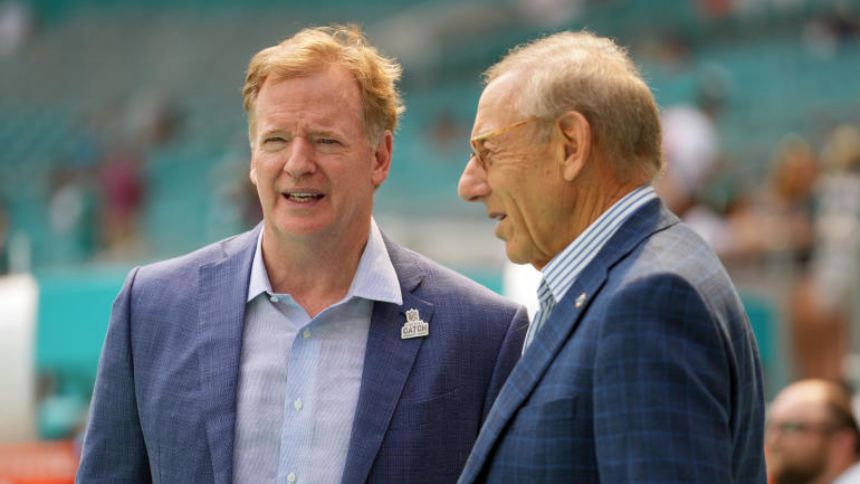 It's been a big day in my house and that's because my 2-year-old just headed off to her first day of school. I haven't gotten any calls yet from the school so I'm assuming that things are going well. The two of us had Mickey Mouse waffles for breakfast and that's what I'll be using as energy to power my way through today's newsletter.'

Speaking of today's newsletter, it's going to get a little crazy. We've got the Dolphins getting docked draft picks for tampering with Tom Brady. We've got more Deshaun Watson news and we're going to take a look at the NFL's most valuable franchises.'

You know what, I'm going to stop babbling now so we can get to the rundown.'

The only NFL news that anyone has been talking about for the past 24 hours is the Deshaun Watson suspension, so that's exactly what Ryan Wilson and Will Brinson spent all their time talking about for Tuesday's episode of the Pick Six Podcast.'

Both Wilson and Brinson felt that the suspension was probably too short, but Wilson did defend the ruling from former federal judge Sue Robinson.'

"On some level, I think Sue Robinson's hands were tied," Wilson said. "There's no rule of law in the NFL."

Wilson then pointed out that Robinson made her judgement based on precedent and you can't really get mad at judge for doing that, because that's what they do. As for whether the NFL will appeal the decision, Wilson thinks the league is watching closely right now and taking notes on how the public is reacting to the six-game suspension.'

"I do think that the NFL wants to see which way the wind is blowing PR-wise and they will determine whether they appeal based on that," Wilson said.'

Brinson and Wilson spent nearly 30 minutes touching on every possible topic about the suspension, including why you shouldn't compare Watson's suspension to the ban given to Calvin Ridley.'

If you want to listen to the entire episode,'be sure to click here. You can also watch today's episode on YouTube by clicking here. '

Now that the suspension decision is in, the NFL now has until Thursday to decide whether it wants to appeal the six-game punishment given to Deshaun Watson. One reason the league might NOT appeal the suspension is because it would undermine Sue Robinson in her first case as the NFL and NFLPA's jointly appointed disciplinary officer.'

However, if the NFL does decide to appeal, that would almost certainly be bad news for Watson because the league has a lot of ground to stand on.'

Here's why an NFL appeal could lead to a lengthening of Watson's suspension:'

No matter what happens, we won't have to wait long to find out because the NFL only has until the end of the business day on Thursday to file the appeal.'

The NFL's investigation into the Dolphins is finally over and it definitely didn't go so well for Miami. During the seven-month investigation, the NFL was looking into two things: Whether Stephen Ross asked Brian Flores to intentionally lose games by tanking and whether the Dolphins were guilty of tampering during their alleged pursuit of both Tom Brady and Sean Payton.'

The tanking allegation was found to be partially true while the tampering allegation was proven to be totally true, and because of that, the NFL has dropped the hammer on the Dolphins with a big punishment that includes:'

According to the NFL, the Dolphins were docked draft picks for their brazen pursuit of of both Brady and Payton. Here's what the league had to say about that part of the investigation:'

As for the tanking allegations, the NFL found that once the Dolphins were hopelessly out of the playoff race in 2019, Ross wanted the team to improve its draft position by losing, but he never made a $100,000 offer to Brian Flores, as the former Dolphins coach had claimed. The NFL also pointed out that not only did the Dolphins not tank in 2019, but they actually won two games late in the season that ended up hurting their draft position.'

The most interesting thing in this investigation is the level of detail involved with the Brady tampering. There had been reports all offseason speculating that the Dolphins had hoped to land both Brady and Payton this year. The fact that Brady had been talking to the Dolphins all the way back in August 2019 means that he was willingly playing a part in the tampering even though he was still a member of the Patriots.'

In a twist, Brady will actually be practicing against the Dolphins next week when Tampa Bay and Miami get together for two days of joint practices (Aug. 10 and 11).'

Jerry Jones might not know how to build a Super Bowl-winning team, but if the NFL ever decides to give a trophy out to the team that turns the biggest profit, Jones will probably get one of those. In the latest ranking of the most valuable NFL franchises, the Cowboys'. According to Sportico, the Cowboys are worth an estimated $7.64 billion, which is $1.73 billion more than the next team on the list (Rams).'

Although the Cowboys haven't been to a Super Bowl in more than 25 years, that doesn't seem to be hurting the value of a team that has basically been printing money for Jones since he bought them for $140 million in 1989.'

The Cowboys ($7.64 billion) are worth nearly'$2 billion more'than the two least valuable franchises combined. The two bottom teams -- the Bengals and Lions -- have a combined value of $5.7 billion. Apparently, the Bengals run to the Super Bowl didn't help their valuation at all. Cincinnati finished in dead last with a franchise value of 2.84 billion. The Bengals were one of just four teams with a value under $3 billion. Also, the most valuable division is the NFC East, which has all four of its teams ranked in the top nine.'

Here's a look at the list of the NFL's 10 most valuable franchises.'

For the roughly three people out there who have been begging me for special teams coverage in the newsletter, we have some big ones today with Chris Boswell and Jake Bailey both landing monstrous new contracts over the past 24 hours.'

Here's a look at the deal that each player signed:'

Bailey was the ranked the seventh best punter in the'. As for Boswell, I had him', so I'm not surprised to see him getting paid as much as Tucker. Boswell gets overshadowed because he plays in the same division as Tucker, but he's definitely one of the best kickers in the NFL. '