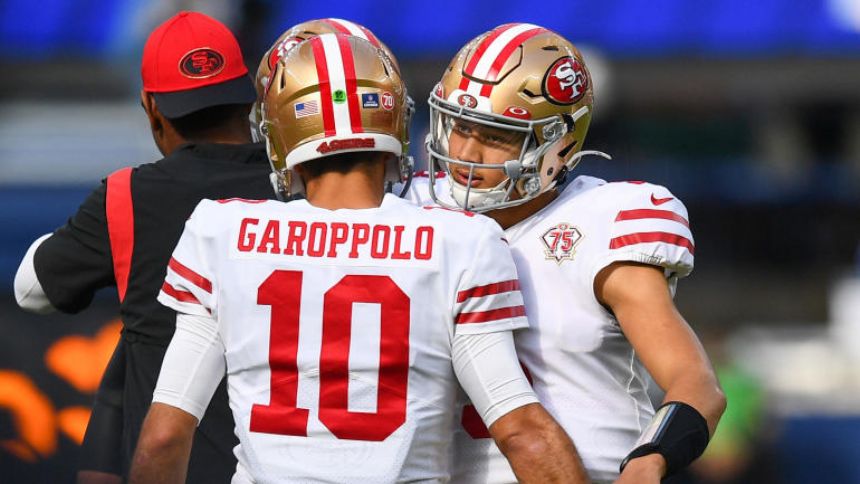 Trey Lance's season-ending ankle injury means the San Francisco 49ers will know even less about their franchise quarterback heading into his third year in 2023 with hardly any major, real-time football under his belt.

Lance's first-quarter ankle break ended his season just as it started. Through two seasons he has just 102 pass attempts, which are fourth-fewest among top-five picks through their first two seasons since 1967. And it could well put the Niners in a deeply precarious quarterback situation should circumstances play out in certain ways this year.

First of all, San Francisco is fortunate it was able to hang on to Jimmy Garoppolo. The insurance policy they had by restructuring the former franchise QB is now paying off, and the Niners will gladly pay the extra $350,000 a week if it means he's leading them to victories.

Winning this season is most important, and what has to happen next offseason is a bridge that GM John Lynch and head coach Kyle Shanahan won't have to cross for several months. But make no mistake: that bridge is coming up.

At first, keeping Garoppolo seemed like a tell-tale sign to some that San Francisco would eventually have to bench Lance in favor of Jimmy G. That hum grew louder this past week after the loss in the Great Chicago Monsoon of 2022.

While it's true Lance did not have an impressive preseason or training camp, I was told he stepped his game up at practice immediately following Garoppolo restructuring his deal. There was optimism - maybe even confidence - that this was going to work. Now, a significant injury setback to the young dual-threat quarterback.

The Niners sent away two future first-round picks in order to trade up to get Lance. It's a significant amount of capital for someone who will have thrown 102 passes for them in two seasons. Shanahan has reiterated Lance is their guy publicly and privately.

But now you have Garoppolo on a one-year, incentive-laden deal. He's taken you to one Super Bowl and come within a dropped interception of another. The 49ers have arguably one of the most talented rosters in the entire league. And considering the early deficiencies we're seeing out of Los Angeles, no one would blame you if you're taking San Francisco to win the NFC West right now.'

What happens if Garoppolo balls out? After all, he's won 33 of his career 47 starts and he doesn't even get credit for Sunday's victory against the Seahawks. He has a no-tag clause in his contract, so a big year means a big payday in 2023 for the soon-to-be 31-year-old quarterback.

The Niners could see Garoppolo walk out the door for nothing more than a mid-round compensatory pick while handing the franchise over to the inexperienced Lance, and whatever insurance policy they get next March wouldn't be as good as the one they just cashed in Sunday.

There are worse problems to have than winning a bunch one year to having to make a tough decision at quarterback months later. But that's a first-world problem San Francisco could realistically face immediately following this season.

Tua Tagovailoa played the game of his career so far, and obviously his six touchdowns stand out on what will likely earn him AFC Offensive Player of the Week honors in short order.

But how well Tagovailoa spread the ball around was equally as impressive. Nine Dolphins got catches Sunday against the Ravens and 10 were targeted. Jaylen Waddle had 19 targets total, Tyreek Hill had 13 and tight end Mike Gesicki caught all four of his targets for 41 yards and a touchdown.

Waddle's 19 targets blasted his previous career-high of 13. Last week when I sat down with Tagovailoa for a one-on-one interview for The NFL Today, I asked him about whether it was a blessing or a curse to have to answer for how he distributes the ball with such a plethora of weapons at his disposal.

"I think everything's a blessing and a curse. I look at this as a blessing. Being able to have all these guys that I'm able to throw to," Tagovailoa said. "There are some plays where we definitely wish we had back [in Week 1 against the Patriots] and there are some where things break down and the first read, I got to get all the way to my last read. Things like that happen and it's just how we got to go about playing the game. You can draw up the best plays and have this guy wide open in practice and then in the game it's totally different. So you're just reacting to whatever you're given out there."

And while Tagovailoa may have responded to the outside noise this offseason more than he ever had before, he's back to blocking out anyone who's not in the building or in his circle.

"It's either I let it affect me or I don't let it affect me. So with my response, that's just to what I've heard. Other than that, I go home to my wife and we watch movies and you know, I enjoy my life. That's how I go."

I have a bone to pick with analytics. *Inhales deeply*

I believe in analytics. I like analytics. I think analytics get a bad rap among many in the football community. After all, everyone uses analytics to some degree or another, even if they don't like the term "analytics."

I struggle with the win probability metric, and I always have.

Prior to the Monday night doubleheader, there have been just 30 regular-season games played so far this year. By my count, five of them have been won when the eventual loser had a fourth-quarter win probability of 93% or greater (and six games when the probability was 90% or greater.) Wins that should happen once in every 10 of those sorts of situations - or once every 20 - are happening with regularity early this season.

And the Raiders had a win probability of 96% when leading 23-15 with 16 seconds left against the Cardinals. But Arizona was at the 3-yard line. The Cardinals had to score from 9 feet out, then get the 2-point conversion to tie and score first or more in overtime. You mean to tell me the probability of Arizona winning the game, at that point, was just 4%? This one ... I just don't know about.

Problem: WP typically based on historic rates, but off more explosive than ever. No comp to even 5 years ago, much less 25. Should identify rate change in plays of 10y, 20y, 30y, etc to apply WP to current environment. I bet those 97s would come down https://t.co/mT9kjr89yW

I recognize I'm looking at a sample size of 30 here and making a determination when win probability takes into account thousands of games across decades. But that may be the exact issue. Why should we weight teams coming back from a 10-point deficit in, say, 1993 the same as today?

The NFL has made no secret of its drive for parity across the league. Already 12 games have been decided by three or fewer points, the most through two weeks of any NFL season. Eight teams have overcome deficits of at least 10 points to win or tie, the second-most all time through Week 2. The game is changing, and these close games and tight finishes regularly lead the notes distributed to media by the league office. All about messaging!

Perhaps we need to add "historic" before win probability. Or, people who didn't get a "C" in the one statistics class they took in college could determine an "adjusted win probability" to account for the aforementioned offensive explosion.

Not so special teams

One of the big storylines from Week 1 was the kickers, whether they made or missed big-time field goal attempts. In Week 2, there were a few special teams blips that may have flown under the radar.

Because the Dolphins won in dramatic fashion, it's easy to forget they allowed a 103-yard kickoff return for a touchdown by Devin Duvernay. It was Duvernay's second career kick-return TD but the first allowed by the Dolphins since the 2019 season.

In Pittsburgh, the Steelers didn't block gunner Brenden Schooler on a punt in the third quarter. Schooler went free down the field to Gunner Olszewski, and when Olszewski muffed the punt, he was there to collect. The Patriots would score three plays later to increase their lead to 17-6, and Steelers coach Mike Tomlin called it a "significant play" in his postgame press conference.

And the operations issues continued with the Denver Broncos in Week 2. Late in the third quarter, the Broncos lined up for a 54-yard field goal attempt with Brandon McManus, who missed a game winner from 64 yards the previous week in the much-discussed decision by head coach Nathaniel Hackett. The Broncos wound up having to take a delay-of-game penalty - their third over seven quarters to that point - and then punted once the attempt would have been a 59-yarder in good weather and high altitude.

"That was something we talked about in those situations beforehand," Hackett said later. "We decided we wanted to go for the kick and then obviously we had the delay of game and decided to punt it because our defense was doing really well."

They burned their second timeout of the half with 10 minutes left in the fourth quarter when they failed to send out a punt returner for a Houston punt. The Broncos had just sacked Davis Mills on third down, and the Texans were in an obvious punt situation on fourth-and-14 from the Denver 45 in a close 13-9 game. But the Broncos didn't have a returner on the field and had to call a timeout.

Browns defense has work to do

The Cleveland Browns need to bounce back in a big way this week from the epic collapse against the Jets, and it starts with their defense.

The defense got sloppy in its soft zone against the Jets and let Joe Flacco get over top in the final two minutes of the game. Defensive coordinator Joe Woods will need to make adjustments this week so the same doesn't happen on a short week against Mitchell Trubisky and the Steelers on Thursday night.

It seems hard to believe right now that he'll have his second-best pass rusher, though. Jadeveon Clowney exited the game in the second half with an ankle injury and was seen later with a boot on his right foot. Rarely is a player in a walking boot on Sunday and taking impact snaps four days later.