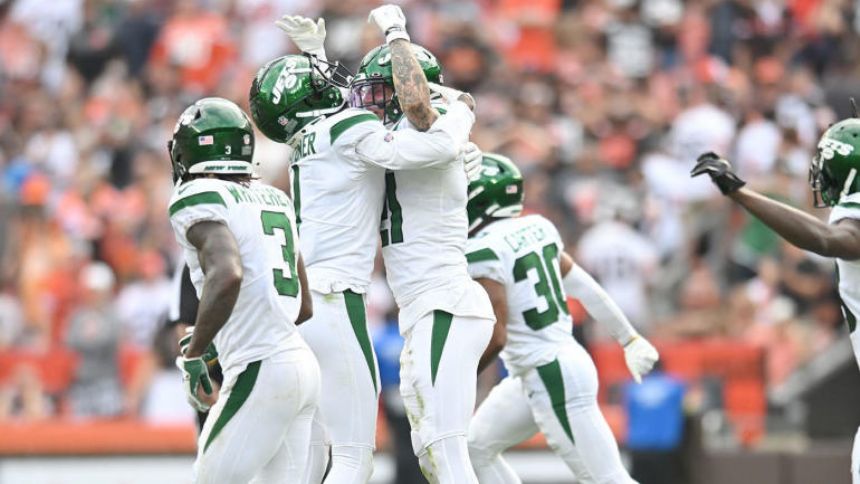 Tua Tagovailoa threw six touchdowns against the Ravens, which is remarkable. Even more remarkable is that four of those came IN THE FOURTH QUARTER! Two of them went to Tyreek Hill, a third went to River Cracraft, and the final and most important score was a seven-yard connection to Jaylen Waddle with just 14 seconds to play.

A truly miraculous victory for the Jets. They were down 13 points with 90 seconds to play and somehow stole a win from the Browns at home. Here's how it happened: Joe Flacco hit Corey Davis for a 66-yard touchdown with 1:22 to play, the Jets recovered the onside kick, and then rookie Garrett Wilson caught his second TD of the game with 22 seconds to go. And because Cade York missed an extra point earlier in the game, New York took the lead with an extra point of its own. An interception from Jacoby Brissett sealed an unfathomable loss for Cleveland.

The Dolphins refuse to go away. Down by as much as 21, they tied the game after Tua Tagovailoa launched two bombs to Tyreek Hill for the FOURTH and FIFTH touchdowns of the afternoon for Tua.

TUA TO TYREEK FOR 48 YARDS!

Jameis Winston, who threw a whopping 30 interceptions in 2019, is back to his old ways Sunday against the Buccaneers. Three fourth-quarter possessions, three picks for Winston. The third was by far the worst, with Mike Edwards returning it 68 yards for a touchdown to all but seal the Buccaneers victory.

Nick Chubb, perhaps the best pure runner in the NFL, has been rock solid again Sunday. He's rushed 15 times for 78 yards and two touchdowns, the second of which put the Browns back ahead early in the fourth quarter over the Jets.

Jameis Winston wanted Chris Olave on a deep ball near the goal line. Instead, he got a jumping, twisting Jamel Dean coming down with an impressive interception to give the Buccaneers back possession.

The Buccaneers and Saints do not like each other. Need proof? Look no further than this massive brawl that broke out late in the third quarter of a 3-3 game. Mike Evans and Marshon Lattimore were ejected as a result.

Lamar to the HOUSE

When negotiating what should be a record-breaking new contract next offseason, Lamar Jackson just needs to put on the film from his game against the Dolphins. Three touchdowns through the air and now one on the ground after outrunning everyone for a 79-yard house call.

It looked as though the Lions were about to give up a 20-plus-point lead, but D'Andre Swift eased the minds of Detroit fans with a fantastic individual effort. He fell backwards after catching a pass at the 20-yard line, but with no one around to touch him down, he popped up, made three defenders miss a la Barry Sanders and then waltzed into the end zone.

The Gunner Olszewski revenge game has not gone the way Gunner Olszewski has wanted it to. Down 10-6, the Steelers were set to get the ball back when Olszewski muffed the punt, allowing the Patriots -- the team Olszewski played for his first three NFL seasons -- to have a first-and-goal opportunity. They capitalized with Damien Harris scoring from two yards out to give New England an 11-point advantage.