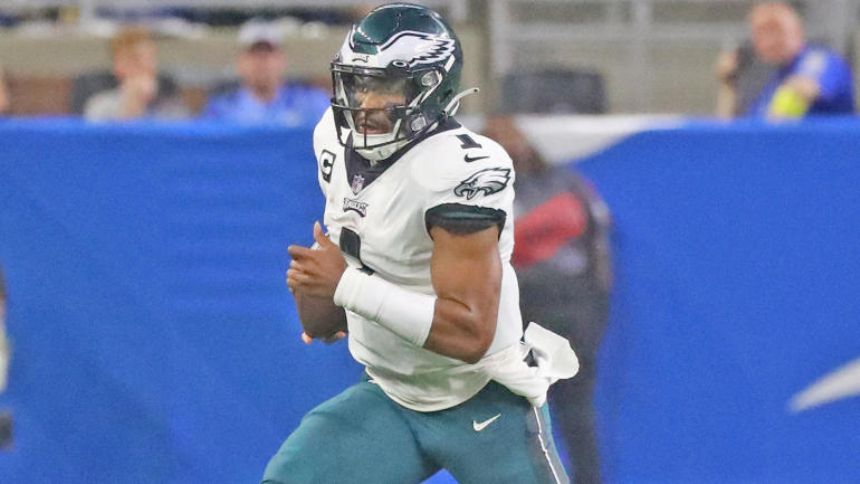 One thing I learned was to stay away from the Detroit Lions, because they are responsible for two of my misses among my top five picks. I'm feeling more confident about this week compared to Week 2, so let's take a look at what I'm thinking.'

As always, credit to the AP Sports research team for making me sound smart.'

Carson Wentz gets a chance to enact some revenge against the team that drafted him No. 2 overall in 2016, as the Eagles pay a visit to the Commanders. Unfortunately for Washington, things are going very well for its division rival. Philly is 2-0 and coming off of an impressive 24-7 victory over the Minnesota Vikings. Jalen Hurts scored three total touchdowns, while Darius Slay locked down Justin Jefferson -- intercepting Kirk Cousins twice when the star wideout was targeted.'

It's worth mentioning that Wentz is the third notable former Eagles quarterback to join Washington along with Sonny Jurgensen and Donovan McNabb, and both Jurgensen and McNabb won their first rematches against the Eagles. However, Jurgensen and McNabb were better players than Wentz. That's not to say Wentz hasn't been solid with Washington up to this point, but the Eagles are overall a better team than the Commanders. Philly's ground game will propel the Eagles to victory, as Washington allows an average of 7.5 yards per rush this season, which is worst in the NFL

I never want to get ahead of myself and I will never guarantee you anything but taxes and death, but this line confuses me. I get that the Chiefs came out incredibly slow against the Los Angeles Chargers'last week, but are they not still a top five team in basically everyone's power rankings?'

The Colts on the other hand are rattled -- and I would be too. You open up the year tying with the Houston Texans, and then get blown out by the Jacksonville Jaguars. Yikes. Sharps are clearly on the Colts in this spot, however, as the line fell from K.C. -6.5 to K.C. -5.5 on Wednesday. That's fine, I'll take the extra point.

Patrick Mahomes has thrown seven touchdowns and zero interceptions this season. Remember, it's still September, and the Chiefs QB is 13-2 in the month with 48 passing touchdowns compared to just three interceptions thrown. The Chiefs have also won nine straight regular-season games with extended rest, which is the longest active streak in the NFL.'

Some are scared to lay the points with the Ravens since, one, this is the Patriots home opener, two, the Patriots defense has been stout, and three, the Ravens stumbled in Week 2 -- blowing a 21-point fourth-quarter lead at home. At the same time, we can't just overlook the fact that New England's offense is averaging just 12 points through two games, while Baltimore is averaging 31 points per game. I'm banking on Lamar Jackson and Co. using last week's loss as fuel moving forward.

All the trends say that the Patriots should win this game straight up, but I'm bucking all of them. This Patriots team is not like the Patriots teams of old, and they will have to match one of the most explosive offenses in the NFL Sunday.

As AP Sports.com's resident Titans writer, I can tell you that Tennessee is in serious trouble. Ryan Tannehill hasn't been great, Derrick Henry hasn't looked like himself, offensive coordinator/play-caller Todd Downing is quickly becoming the most disliked man in the Music City, left tackle Taylor Lewan may be lost for the year, the run defense has taken a major step backwards from last season, the cornerback play is worse than people realize and the pass-rushers are banged-up. Should I just stop there?

The Raiders are 0-2 as well, but I think it's pretty easy to guess what their game plan will be come Sunday. On offense, attack the young cornerbacks with Davante Adams and Darren Waller. On defense, use Maxx Crosby and Chandler Jones to wreak havoc on a backup left tackle and rookie right tackle. Just in case you forgot, Jones racked up five sacks and two forced fumbles the last time he played the Titans.

The Broncos were not my pick to win the stacked AFC West this season, but I definitely feel as though I overestimated them. First-year head coach Nathaniel Hackett made the wrong call with the game on the line in Week 1, and he again struggled on fourth-down calls/field goals in Week 2. There's no reason the Broncos should have been that close with the Texans, and while they ultimately won, fans did not leave Empower Field at Mile High feeling victorious. Denver is 0 of 6 in the red zone this year, leading the league in penalties, winless against the spread and now has to face off against the toughest team it has played thus far.

As for the 49ers, can you believe their luck? You almost can't make up this storyline. They tried to move on from Jimmy Garoppolo this offseason, failed to do so and now are thanking their lucky stars they have him after Trey Lance's injury. No one is celebrating Lance breaking his ankle, but Jimmy G is going to take advantage of this opportunity. I still don't think Garoppolo is one of the elite signal-callers in the NFL, but he's consistent enough. The 49ers are 31-14 with Garoppolo, and 9-29 with all other starting quarterbacks since 2017. This line was a pick'em just a few days ago, but is now moving in the 49ers' direction -- and for good reason in my opinion.