No. 2 Bama's Reichard has flipped script for Saban kickers 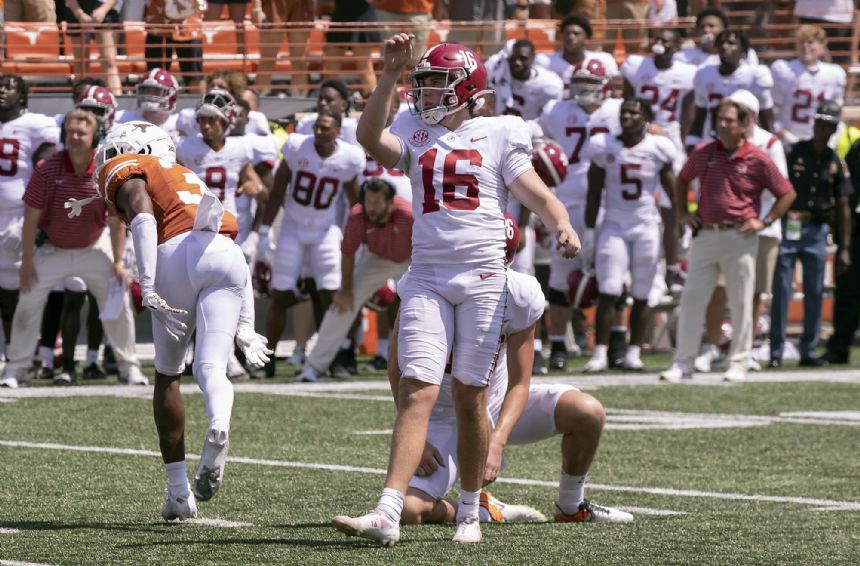 Will Reichard points to the sky every time he makes a kick for Alabama, and he's made many.

The second-ranked Crimson Tide's kicker - easily the most successful of the Nick Saban era - is honoring God with the gesture and also his late father, Gary. That includes Reichard's game-winning kick against Texas last weekend, his first game winner since the third grade when he lifted his Hoover Raiders past Clay-Chalkville.

Reichard and the Tide beat Louisiana-Monroe 63-7 on Saturday, a week after the biggest kick of his career gave him yet another chance to thank his father.

Gary Reichard spent countless hours every weekend coaching his son in soccer and kicking. Activities he had to learn from scratch himself to tutor his son, talking to experts, watching videos and reading any book he could find on the subject.

Gary Reichard was diagnosed with pancreatic cancer in early 2016. He died at age 53 that March 28 when his son was in ninth grade.

"He was my kicking coach. He was my soccer coach," Will Reichard said. "I definitely wouldn't be here without him at all. We would go to the field every weekend just like most dads with sons do. But he took it to a whole other level."

One way he coped with the loss was riding the family's golf cart a mile to the high school and spending hours launching kick after kick on a lonely field.

Now, he pays tribute after every kick and still goes through the same pregame routine.

"The pregame is always really special to him," said Reichard's mother, Dana. "He goes through that and thinks about his dad."

She recently came upon a notebook charting in detail his every kick, everything from the yardage to what quadrant of the uprights it went through or where the ball went on misses.

The miniature soccer ball on a glass case that used to rest on his dad's nightstand now sits on the dresser in Reichard's Tuscaloosa condo.

Those lessons and workouts have paid dividends for both Reichard and Alabama.

His success has flipped the script for Tide kickers, long regarded as the Achilles' heel of Saban's otherwise dominant Alabama teams.

Reichard is a four-year starter - including an injury-shortened freshman season - who has made 44 of 53 field goals, an 83% clip. He was a finalist for the Lou Groza Award in 2020 when he made all 14 field-goal attempts and was perfect on 84 extra points.

Saban said Reichard has been one of his most consistent players.

Yes, perfection as an Alabama kicker. It's no joke.

The most famous example of costly failed kicks pre-Reichard was the four misses in the so-called Game of the Century against LSU in 2011, a 9-6 overtime loss.

Reichard remembers watching that game with family and friends at home.

Then there was the Kick Six some two years later, when a long field goal fell short and Auburn's Chris Davis returned it 109 yards on the final play. And that's just the short list.

Alabama's kicking woes became almost a national punch line for a team that did everything else so well. And rather than intimidating Reichard, it drew him to Tuscaloosa. As Dana, who remarried over the summer, said of that kind of self-confidence, "He lets his faith be bigger than his fear."

During a Zoom call with Saban when Reichard committed to Alabama, she told the coach that she wanted him to have confidence when sending him out for a kick.

"That was always something that's always motivated me since I've been here and is going to continue to motivate me to try to turn that around," Reichard said, adding that he wants to help "keep Alabama an elite special teams program."

"It's not a good position when you're on a team and everyone thinks that you're the worst position group on the team," he said. "That's something that drives all the specialists here every single day."

Then again, Alabama kicking woes are old news these days.