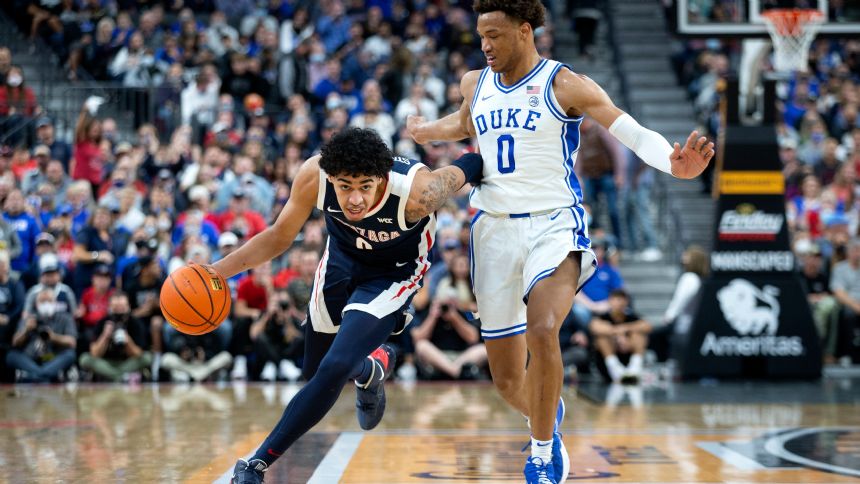 Gonzaga battled back from a nine-point deficit thanks to Julian Strawther's offensive prowess early in the second half, as he scored eight of the Bulldogs' first 14 points to help them get within two. But Gonzaga suffered through a 0-for-5 span down the stretch and turned the ball over three times to allow Duke to seize the momentum and close the game on a 13-9 run.

Strawther led Gonzaga with a career-high 20 points and 10 rebounds. Drew Timme added 17 points, Chet Holmgren had 16 points and Rasir Bolton chipped in 15 for the Bulldogs.

The long-anticipated showdown involving Duke coach Mike Krzyzewski became a battle of Duke's relentless defensive pressure and Gonzaga's precise passing through lanes that the Bulldogs created on the fly.

After Gonzaga took an early 4-0 lead, Duke quickly established dominance with a 17-6 run, with Banchero and Williams putting on a show for the heavily favored Duke crowd.

The Bulldogs closed the gap to three, 19-16, but Banchero scored 13 of Duke's next 21 points. Holmgren, who had to sit midway in the first half due to foul trouble, returned with 1:27 left in the half and drained a soft one-handed jumper followed by a 3-pointer by Strawther.

Duke: The Blue Devils faithful proved it travels well, with the majority of the 20,389 fans inside T-Mobile Arena draped in Duke blue.

Gonzaga: Before Friday night, the Bulldogs trailed for a total of 3:18 in four games - against Texas, Alcorn State, Bellarmine and UCLA. Gonzaga trailed for more than 20 minutes against Duke until retaking the lead on a pair of Timme free throws at the 17-minute mark of the second half.