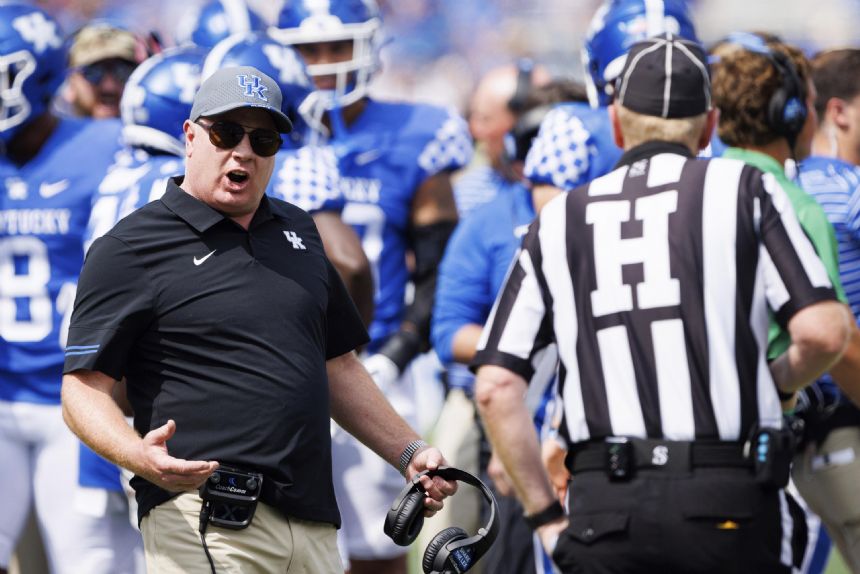 Although the No. 8 Wildcats (3-0) have had good moments achieving their highest ranking since 2007, they haven't been consistent. Penalties, sacks and fumbles have stalled the offensive flow at times, while turnovers have abruptly halted momentum.

With Southeastern Conference play resuming next week at No. 16 Mississippi, Stoops wants his team to stop leaving points on the field and put them on the board in Saturday night's non-conference meeting with Northern Illinois (1-2).

"It's a matter of getting everybody on the same page," the coach said this week. "It's not a matter of are we able to do it or were talented enough to do it, there are no excuses. We've just got to play better, be more disciplined, but again, pay attention to detail."

The Wildcats outgained the Penguins 480-192 while posting their first shutout since 2009. The defense denied all 12 third- and fourth-down chances, and Carrington Valentine's end-zone interception preserved the shutout.

It took some of the sting off his two interceptions that offensive coordinator Rich Scangarello believes are the result of the QB's eagerness to make plays.

"There's just a couple of times where maybe the play isn't in rhythm or the snap was off," Scangarello said, "or sometimes he wants to make the play so quickly and his mind sees it before everyone else that speeds everything else up.

"Slow down, play within the game, let it flow, speed up when you need to. Those are little things as he plays that he's getting better at."

NIU aims to tidy up as well against their second consecutive SEC foe before defending their Mid-American Conference title.

The Huskies look to overcome back-to-back losses to Tulsa and Vanderbilt. Last week's 38-28 home defeat was especially tough for the Huskies as Vandy scored the final 24 points over 22 minutes.

"If we can play clean football, protect the football, have the ability to stay on the field a little on offense and minimize explosive plays on defense, we can go in there, we can go battle," coach Thomas Hammock said.

Freshman Dane Key and transfer Tayvion Robinson are giving Kentucky the receiving options it sought a year after everything went to Wan'dale Robinson. They've each caught 13 passes for 226 and 202 yards respectively, and Key has three touchdowns. Barion Brown is third with nine receptions for 99 yards.

Rocky Lombardi is listed as NIU's starter, though freshman Ethan Hampton helped provide a 1-2 punch last week against Vanderbilt. The two combined to complete the Huskies' first 14 passes for three TDs in building a 28-14 lead. Hampton tossed two of those scores, including a 70-yard catch-and-run by Cole Tucker.

Kentucky's three interceptions lead the SEC and it ranks third in total defense (253.7 yards allowed per game). The Wildcats are in the middle when it comes to sacks and tackles for loss, but Stoops believes those phases will come together.

"Part of that is we need to get home," he said of the pass rush. "But part of it is they are getting the ball out, being creative and not just sitting back there. Those will come if we continue to play at a really high level. They're playing pretty strong right now."

Leading tackler J.J. Weaver will miss the game and is being evaluated after injuring his left arm last week. Jordan Wright will move over to Weaver's outside linebacker's spot while Alex Afari Jr. starts in Wright's place with Keaten Wade backing up both positions.

NIU senior linebacker Kyle Pugh is third on the team with 23 tackles in his unprecedented eighth FBS season. He missed last fall after a spring knee injury and had 2017 and '19 seasons shortened by other injuries. Pugh, 25, got another season in 2020 because of COVID-19 and earned his second All-MAC selection.