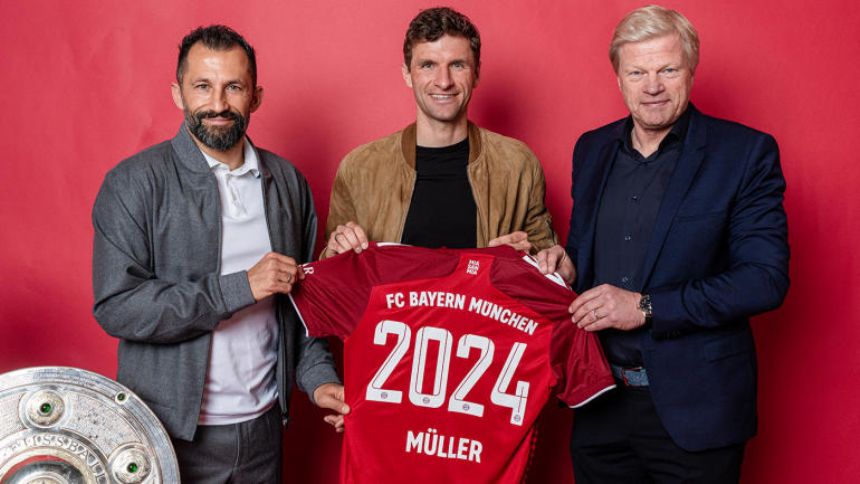 The UEFA Champions League, Europa League and Europa Conference League finals are set, league titles and relegation battles are being decided all over Europe -- this is the business end of the 2021-22 season, and it is frenetic. With all that drama unfolding across the continent, you would be forgiven for not having clocked some of the other news items this week which we are here to make sure you catch up on.

Bayern Munich have moved to secure Thomas Muller's future and the 32-year-old has penned a contract extension until 2024. The Germany international has been with the Bundesliga powerhouse since he was 10 and boasts over 600 competitive outings since his 2008 debut: "I am delighted to have extended my contact with Bayern until 2024," said the 11-time German champion. "The journey we have been on since I joined the academy in 2000 has been a fantastic success story." '

??? @J__Nagelsmann on @esmuellert_'s contract extension: "It was very important that he extended, this will also send a positive signal to people both within the club and outside of the club. It could mean others will follow suit now. I'm really happy about it."#MiaSanMia pic.twitter.com/GZHVbdmfr9

Why it matters: There are few, if any, one club men at a club of Bayern's stature and they are becoming increasingly rare as soccer evolves. Whether Muller sticking around is what Bayern's rebirth under Julian Nagelsmann needed is debatable, but his importance to the club's image cannot be contested.

Serie A strugglers Cagliari Calcio have parted ways with Walter Mazzarri ahead of three vital matches in their bid for survival. The Sardinians confirmed the move on Monday with Salernitana and Venezia to come in two crucial games which should decide the fate of all three at the foot of the table which Alessandro Agostini will now oversee after being promoted from the academy. '

Why it matters: Salernitana's incredible turnaround in form has turned up the heat on clubs like Cagliari who continue to make a mess of their coaching hires. That is now 17 different bosses in the last decade and veteran Mazzarri did not even last a full season as he was hired three matches into this campaign. That is the 11th coaching change overall in the 20-team league.

Craving even more coverage of the world's game? Listen below and follow'íQue Golazo! A Daily AP Soccer Podcast'where we take you beyond the pitch and around the globe for commentary, previews, recaps and more.

It is that time of year again where German clubs unveil some of their business earlier than most and this week has seen a flurry of activity with Matthias Ginter returning to Freiburg from Borussia Monchengladbach and Nico Schlotterbeck joining Borussia Dortmund from Christian Streich's DFB Pokal finalists. '

Borussia Dortmund has signed Nico Schlotterbeck for the 2022/23 season ?? pic.twitter.com/CHcs86kZVM

Why it matters: Ginter was linked with several other European clubs as a free agent while Schlotterbeck was also on many shortlists heading into the summer and this news will force a defensive target rethink for few clubs.

West Ham United manager David Moyes apologized for kicking a ball at a ball boy after seeing red during the Europa League loss to Eintracht Frankfurt. Sent off 12 minutes from time as the Hammers went down 1-0 with 10 men to lose 3-1 on aggregate, Moyes later recognized he was wrong. "I have to apologize for kicking the ball," he said before joking: "The ball boy left it short nicely on the volley for me. I apologize for it. It did not hit him; I think I bent it past him." '

From Zagreb to Frankfurt.
Those special nights at London Stadium.
Beating six-time champions Sevilla at our place.
Lyon away. What a night that was.
Our European journey is over, but we hope we made you proud.
Come On You Irons.???

Why it matters: It seemed controversial at the time as tempers rose with West Ham crashing out, but it was important for Moyes to apologize and not turn it into an unnecessary talking point.

The French Professional League (LFP) are closing on a financial control system which will ensure that Ligue 1 and Ligue 2 clubs are governed more tightly moving forward. New measures proposed include a rule that no club's wage bill can exceed 70% of their turnover while the club's debt cannot outweigh its equity. Clubs who break this from winter onwards will be sanctioned and this was due to come in sooner but for the ruinous impact of COVID-19. Also, first professional contracts can now run for up to five years with a fixed three-year term with two potentially additional years based on performance. '

Why it matters: French clubs have been thrown a lifeline by the CVC deal similar to LaLiga's but clubs will still have to be innovative to bring in new revenue in the future. ESTAC Troyes are a good example as they will wear shirts with an accompanying NFT token against Paris Saint-Germain this weekend. Each Troyes shirt will have a scanning code which is linked to its digital twin and the shirts will then be auctioned off for UNICEF and child victims of Russia's war on Ukraine. If it works, this could be adopted next season with all of Troyes' replica shirts.

Celta Vigo's Santi Mina has received a four-year prison sentence after he was found guilty of sexual abuse. The 26-year-old will appeal the verdict while Ibiza's David Goldar was found not guilty after he was accused of being an accomplice. The incident happened in 2017 when Mina was accused of rape while playing for Valencia and Goldar was alleged to have not prevented her assault.

Why it matters: It remains of vital importance that soccer players face the consequences of their actions and although there remains an appeal, the threat of jail time for Mina is example of the ruinous impact such behavior can have on a career as well as the damage it does to a victim.