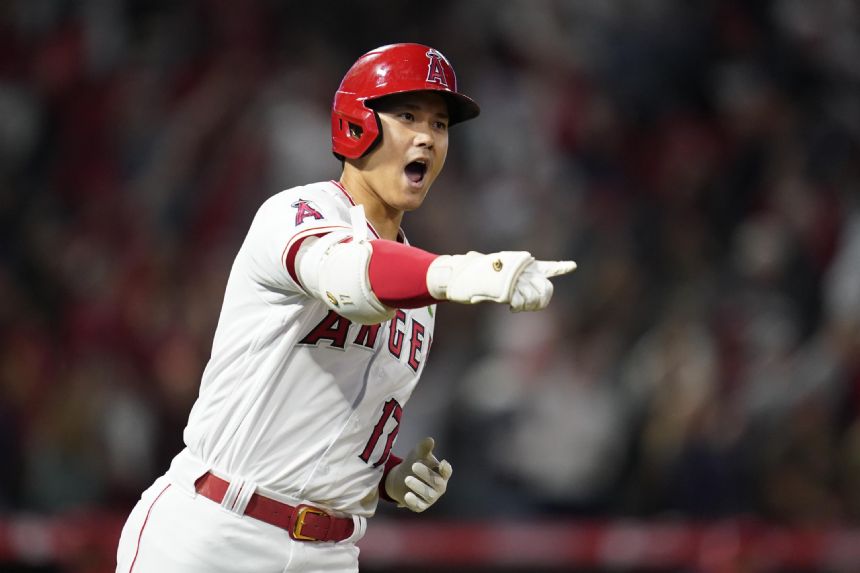 The AL MVP hit two homers in a game for the second time this season and eighth in the majors. Ohtani had a solo shot in the sixth inning off Jalen Beeks. In the eighth, he connected on a 3-1 cutter from Calvin Faucher, who was making his big-league debut, and sent it over the wall in left field for his sixth homer and the Angels' third grand slam this season.

Mike Trout and Jared Walsh also went deep and drove in three runs each for the Angels, who have won five of six.

Randy Arozarena homered and Wander Franco had three hits for the Rays, who have dropped their last two after winning six straight.

Trout's two-run shot to left field off Beeks in the sixth inning extended the Angels' lead to 5-1. Ohtani then homered on the next pitch, the fourth time the two MVPs have connected in consecutive at-bats and the first since June 8, 2019.

Arozarena gave the Rays a 1-0 lead in the fourth inning with a drive into the right-center field bleachers off Noah Syndergaard (3-1).

The Angels responded in the bottom half. Trout singled through the hole at shortstop, Ohtani hit a high fly ball that center fielder Kevin Kiermaier lost in the lights for a single, and Walsh hit a three-run shot to center off Jeffrey Springs (1-1).

Walsh extended his hitting streak to six games. He is 10 for 24 over that stretch with four home runs and 12 RBIs.

Syndergaard failed to retire the Rays in order in his 5 1/3 innings of work. Tampa Bay had runners on second and third with no outs in the second inning, but Syndergaard escaped with two strikeouts and a groundout.

The right-hander allowed seven hits and a walk, striking out seven.

Springs retired the first 10 hitters - including four by strikeout - before running into trouble.

Trout's homer in the sixth was his 161st at Angel Stadium, passing Tim Salmon for the most in ballpark history.

Tampa Bay outfielder Manuel Margot, who was named AL Player of the Week earlier Monday, left the game with right hamstring discomfort after making a headfirst slide while stealing second base during the sixth inning. Margot went 2 for 3 is 14 for 27 over the past eight games.

Angels: OF Taylor Ward was not in the lineup after he tweaked his right hamstring on Sunday. ... RHP Griffin Canning (low back stress reaction) threw a two-inning simulated game.