Olofsson, Krebs each score 2 as Sabres surge past Ducks 6-3 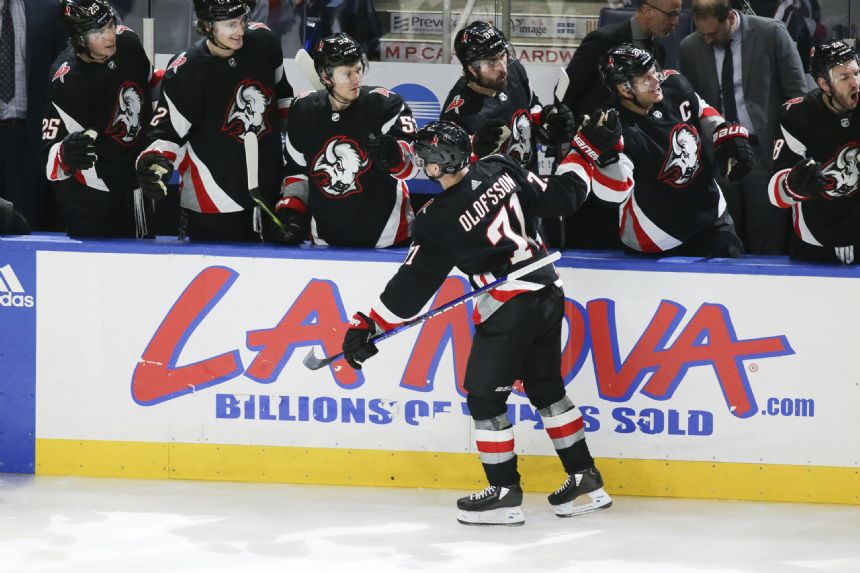 BUFFALO, N.Y. (AP) - Victor Olofsson and Peyton Krebs each scored two goals to lead the Buffalo Sabres to a 6-3 win against the Anaheim Ducks on Saturday.

Olofsson gave the Sabres a 4-3 lead at 2:12 of the third period when he finished off a 2-on-1 break with defenseman Ilya Lyubushkin. His second goal of the game made it 5-3 at 8:07 and he set a career high with 21 goals.

Trevor Zegras had two goals and Simon Benoit also scored for Anaheim. John Gibson made 33 saves for Anaheim, which is 1-5-1 in its past seven games.

Cozens opened the scoring at 9:53 of the first when he faked out Ducks forward Jakob Silfverberg and put a shot over Gibson's shoulder.

Skinner made it 2-0 at 17:39 with a snapshot past Gibson on the power play for his 19th goal of the season.

Krebs' first of the game gave Buffalo a 3-2 lead at 10:49 when he put a rebound of a wraparound attempt by Rasmus Dahlin past a sprawling Gibson.

Benoit made it 3-3 at 15:29 when he sent a turnaround shot towards the net and past Luukkonen.

Tage Thompson and Dahlin have at least 50 points this season. Entering Saturday, The Edmonton Oilers (four) and Toronto Maple Leafs (three) are the only teams with more players who have done so.

Ducks: Visit Arizona on Tuesday for the fifth game of a six-game road trip.