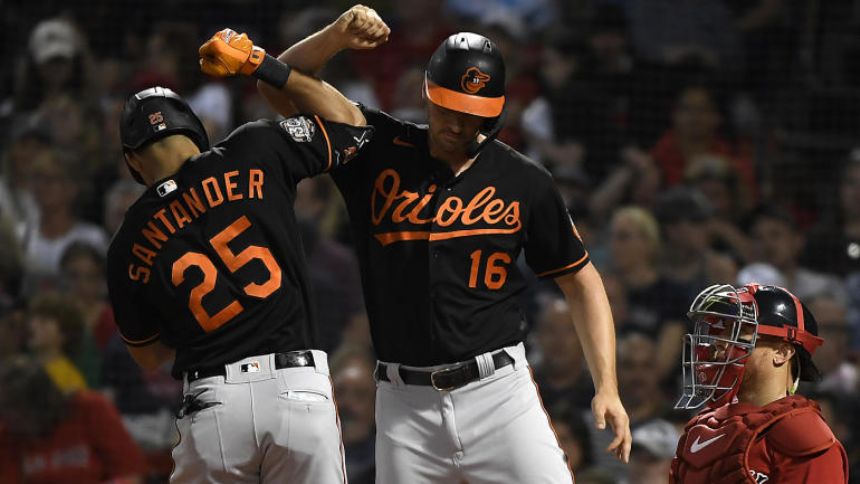 The Boston Red Sox held an 8-2 lead over the Baltimore Orioles heading to the seventh inning on Friday night. The game should have been over. The problem was no one told the Orioles they were supposed to just roll over. OK, the Red Sox bullpen was certainly a problem, too, but that gets in the way of the big narrative.'

Again, it was 8-2 Red Sox. Things got interesting quickly in the seventh, as a one-out, three-run homer from Jorge Mateo tightened it up.'

It wasn't much longer when the Red Sox were forced to sweat more profusely. Anthony Santander walked to lead off the eighth and then Austin Hays clubbed a two-run shot to trim the Orioles' deficit to 8-7.'

Later in the inning, a throwing error allowed the tying run to score. Just like that, it was 8-8 heading to the ninth inning. The go-ahead knock in the ninth belonged to Santander.'

The ninth was actually just an assembly line. There were no home runs. The Orioles had five singles and a sac fly in the inning, leading to four runs and a 12-8 lead for the visiting team.'

On that note, let's not allow the Orioles' bullpen to get lost in the shuffle here. The Red Sox offense has been going really well lately and was on fire early in this one. They scored four runs in the first and two in the second. Single runs in the fourth and fifth are what helped mount the big lead. But if we zero in on the last five -- yes, five -- relievers the Orioles used in this game, it was brilliant work.'

The peak win expectancy for the Red Sox was 98.7 percent, making this the fourth most improbable comeback of the 2022 season (the first was obviously the Mets' against the Phillies).'