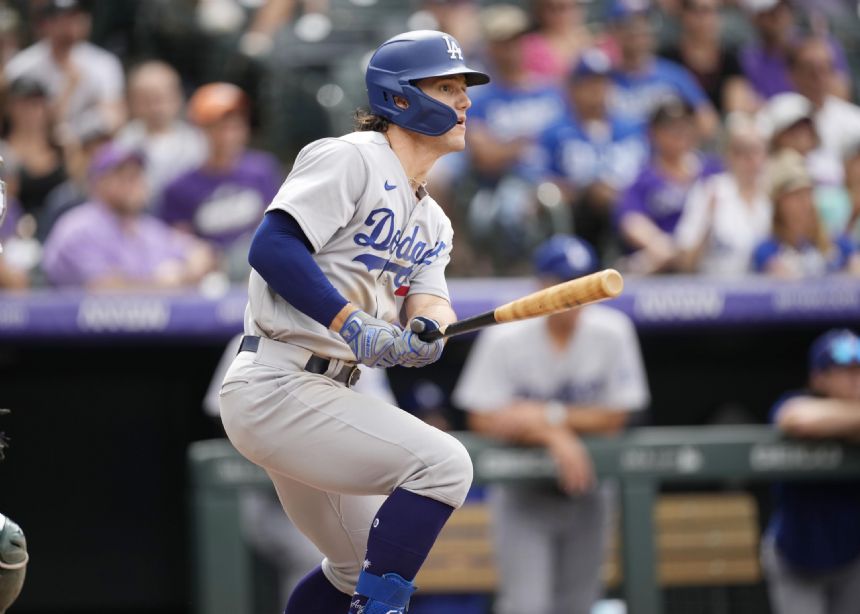 DENVER (AP) - James Outman homered on the first swing of his first big-league at-bat and finished with three hits and three RBIs as the Los Angeles Dodgers beat the Colorado Rockies 7-3 Sunday and closed out July with 21 victories.

Freddie Freeman added three hits and an RBI, passing teammate Trea Turner for the MLB lead in hits. Tony Gonsolin (12-1) bounced back from his first loss of the season as the Dodgers finished the month 21-5, tying the franchise record for most wins in July. They scored 147 runs in the month.

Outman became the eighth Dodgers player in franchise history - the fourth since the move to Los Angeles - to homer in his first career plate appearance, joining Jose Offerman (1990), Garey Ingram (1994) and Keibert Ruiz (2020). Outman had 21 homers in 90 games between Double-A Tulsa and Triple-A Oklahoma this season before being promoted Saturday.

The 25-year-old Outman, with a 1-1 count, homered on a 95 mph fastball from German Marquez (6-9) to give the Dodgers a 2-0 lead after Cody Bellinger singled to open the third inning. The homer landed in the Dodgers' bullpen, making it easy to retrieve the souvenir.

Outman singled and scored in the seventh inning and drove in a run with a double to the wall in right-center in the eighth, helping push the Dodgers lead to 7-3. Outman was the Dodgers' seventh-round pick in the 2018 draft.

Gonsolin gave up three runs - all in the third inning - and five hits while striking out six and walking one. He has given up at least three earned runs in each of his last three starts, after giving up two or fewer in his first 15.

Brian Serven homered for Colorado to open the three-run third off Gonsolin, and the Rockies loaded the bases without getting the ball out of the infield on a hit batter, a walk, and dribbler on the chalk down the third-base line. Grichuk lined a two-run single to right for a 3-2 lead.

Grichuk had his third straight multi-hit game and was 7 for 16 in the four-game series.

The Dodgers scored two in the fourth inning for a 4-3 lead, taking advantage of the Rockies' sloppy defense. With a runner on first and one out, second baseman Brendan Rodgers bobbled a potential inning-ending double play grounder before settling for an out at first. After a walk put runners on first and second, Bellinger doubled in one run, and the second scored when Grichuk misplayed the ball in right.

THE HITS KEEP ON COMING

Freddie Freeman (128) and Trea Turner (127) are 1-2 in the major leagues in hits, Freeman overtaking his teammate with a three-hit game Sunday after Turner extended his hitting streak to 18 with a first-inning single. The two are attempting to become the sixth pair of teammates to finish 1-2 in the league in hits in the live ball era.

Turner led the NL in hits in 2020 and 2021 and would be the second player in major league history to lead the league in three straight seasons. Ichiro led the majors in five straight seasons with Seattle, 2006-2010.

Rodgers extended his home hitting streak to 12 games Sunday and was 9 for 16 in the four-game series against the Dodgers. Among major league second basemen, Rodgers ranked in the top two in four offensive categories - 100 hits (first), 23 doubles (tied for first), 154 total bases (second) and 49 RBIs (tied for second).

RHP Chris Martin joined the Dodgers on Sunday, a day after being acquired from the Chicago Cubs for OF Zach McKinstry. Manager Dave Roberts defined Martin's roles as "reliever."

"Wherever we see fit to take down some outs, that's when he is going to pitch," Roberts said.

Martin was 1-0 with a 4.31 in 31 1/3 innings with the Cubs this season, with 40 strikeouts and four walks. The Dodgers optioned RHP Jake Reed to Triple-A Albuquerque to make room on the roster.

Dodgers: 3B Justin Turner (abdominal strain) missed his fourth straight game Sunday. A recent MRI was negative, but "there is still some sensation," Roberts said. "We don't need to push him." Turner is to play catch and run Monday, and the earliest he could be back in the lineup is Thursday against San Francisco, Roberts said. ... IF/OF Chris Taylor (foot) is to begin a rehab assignment Monday. "I really can't see it being less than seven games," Roberts said. Taylor has not played since July 4. ... RHP Blake Treinen (shoulder) is scheduled to throw a simulated game Wednesday in San Francisco. He has made three appearances this season, the last April 14.

Rockies: LF Kris Bryant (left foot soreness) was removed in the top of the sixth inning. After scoring on a single in the third inning, Bryant ran into the clubhouse before returning to the field, only to be removed three innings later. ... 1B C.J. Cron had a day off. Cron, who was hit by a pitch in the left wrist July 8 in Arizona, is 3 for 36 with one homer and two RBIs since the All-Star break.

Dodgers: LHP Andrew Heaney (1-0, 0.47 ERA) is to oppose RHP Logan Webb (9-4, 2.91) in the opener of a four-game series in San Francisco. Heaney struck out four in four scoreless innings of a no-decision against Washington in his first appearance since being activated from the injured list on Wednesday. The Dodgers are 6-0 at home and 0-3 on the road against the Giants this season.