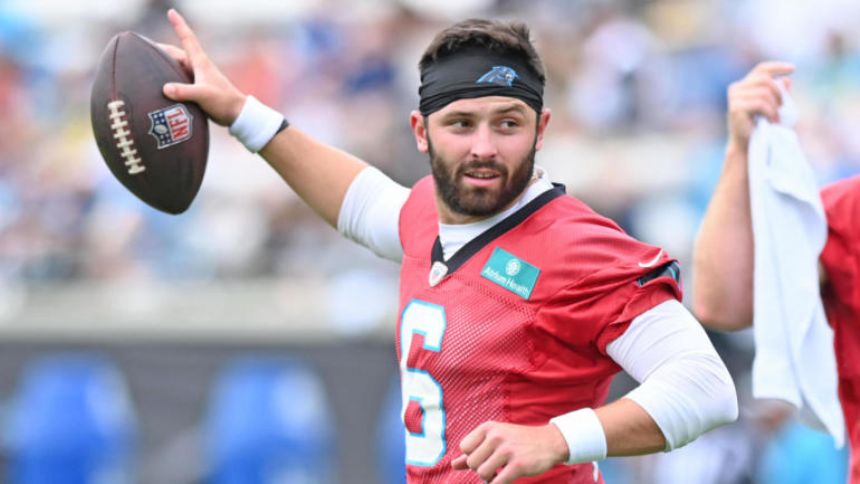 The rest of the NFL world may be talking about Deshaun Watson's , but Baker Mayfield, who was traded to Carolina following a messy divorce from Cleveland, is choosing to stay out of it.'

Mayfield spoke to the media just hours after former Watson's suspension was reported. The Browns' quarterback from 2018-21, Mayfield was asked about a possible Week 1 showdown between himself and Jacoby Brissett, who is in line to be the Browns' starting quarterback while Watson is serving his suspension.'

"Honestly, it's none of my business," Mayfield told AP Sports NFL Insider Josina Anderson. "I don't play against the other quarterback. I know that's the most cliche thing to say, but that's just the truth when it comes down to it. I'm game-planning against that defense. ... So, I've got to keep getting better.'

"I'm not focused on Week 1 right now. ... We'll handle that when it comes, but for now, it's about getting the Panthers better and our offense continuing to get better as well."'

Mayfield offered a similar response when asked if he had any thoughts regarding Watson's six-game suspension. The suspension, which was determined by former federal judge Sue L. Robinson, came after the NFL reportedly pushed for an indefinite suspension of at least a year.'

"No," Mayfield said. "I'm paid to play quarterback and lead this team, not to make decisions on anything other than that."'

Instead of adding fire to the flame, Mayfield chose to keep any thoughts he may have regarding Watson and his former team to himself. Mayfield chose to answer those questions in a diplomatic manner while redirecting the conversion toward his current situation: a position battle with Sam Darnold, a fellow former first-round pick.'

While it's still early in camp, Mayfield has enjoyed a solid start with his new team. Along with having success in practice, his on-field demeanor has hit the right chord with his teammates. In fact, veteran Panthers linebacker Shaq Thompson recently compared Mayfield to the best quarterback in franchise history, Cam Newton.'

"He's a competitor," Thompson said of Mayfield, via Joseph Person of The Athletic. "That's how Cam was in 2015. Cam was a competitor, talking mess. We're all competitors. I love a quarterback who talks trash. We're gonna talk trash right back at him."