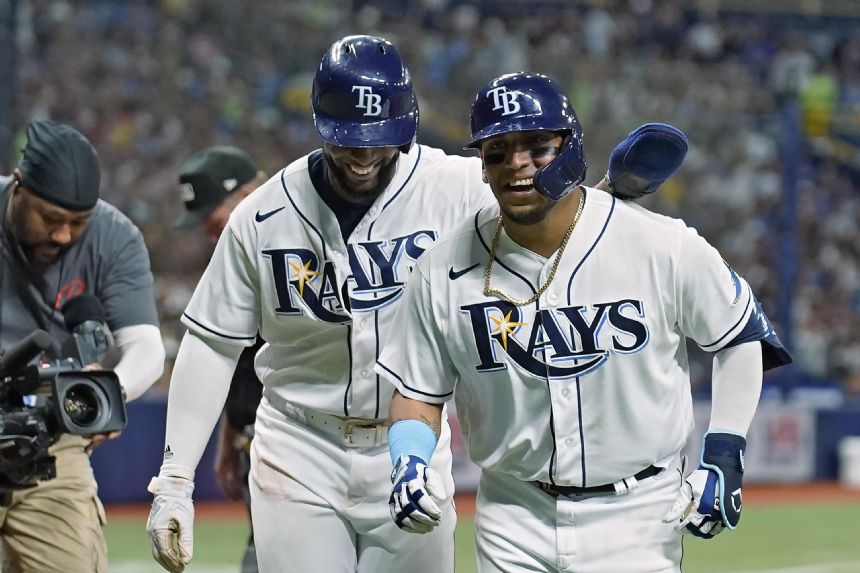 Paredes, who had four RBIs, combined with Harold Ramirez for back-to-back homers in the first off Nestor Cortes, then put the Rays ahead 3-2 in the third and added a two-run drive in the fifth on the first pitch after Clarke Schmidt relieved.

The Rays led 5-2 before Marwin Gonzalez hit a two-run homer with two outs in the ninth off Colin Poche, who got his fifth save when pinch-hitter Aaron Judge flied out to the left-field warning track.

Shawn Armstrong (1-1), the second of seven Tampa Bay pitchers, got his first win for the Rays despite giving up DJ LeMahieu's tying, two-run single in the second.

Cortes (6-3) allowed four runs and six hits in 4 1/3 innings, giving up three homers for the first time in his major league career.

Gonsolin (9-0) gave up two runs on solo homers by Jonathan India and Albert Almora Jr. but only allowed one other hit through five innings and 87 pitches. The 28-year-old righty has a 1.58 ERA.

Four Dodgers relievers threw scoreless innings to wrap it up.

Tyler Mahle (2-6) was lucky to give up only four runs through six innings. He allowed 12 hits but manage to strand eight runners.

Freeman had a two-run double and a bases-loaded triple.

Madris hit solo shot to right-center field off Mark Leiter Jr. in the sixth inning to close the scoring.

Contreras (2-1) allowed one run and four hits while striking out three and walking two.

Cesar Hernandez doubled on the game's first pitch from Jordan Lyles (4-6) and scored on a double by Nelson Cruz to put Washington in front. Hernandez added an RBI grounder in the second inning.

Fedde (5-5) struck out four, walked one and did not allow a runner past first base.

Kyle Finnegan worked the seventh, Carl Edwards Jr. pitched the eighth and Tanner Rainey completed the four-hitter for his eighth save.