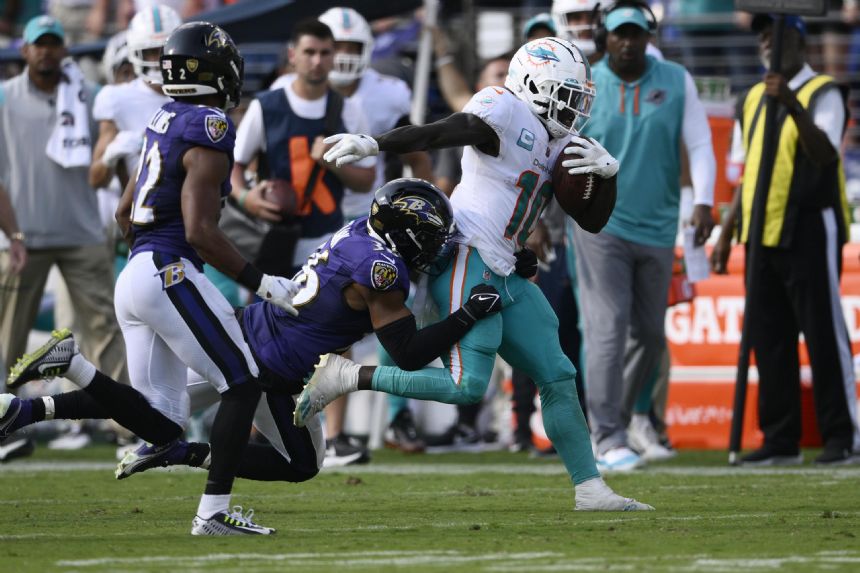 Then their one big weakness - pass defense - undid all of that good work.

Baltimore ranked last in the NFL against the pass a season ago, and after trying to bolster the secondary with offseason additions, the Ravens clearly still have a long way to go. Some of that is because the defensive backfield isn't totally healthy, but in the fourth quarter of their 42-38 loss to Miami on Sunday, they allowed long touchdowns that shouldn't happen against a team protecting a comfortable lead.

Jackson threw for 318 yards and three touchdowns and also had a long TD run. Devin Duvernay ran the opening kickoff back 103 yards for a touchdown. Baltimore led 35-14 in the fourth quarter before Tua Tagovailoa and the Dolphins came storming back. Tagovailoa finished the game with six TD passes, including the game-winner with 14 seconds left.

Miami went 68 yards in six plays on the winning drive, and the Ravens (1-1) weren't able to put up much resistance, but it was two previous touchdown passes in the fourth - of 48 and 60 yards to Tyreek Hill - that really stood out. The Baltimore defense was badly beaten deep both times.

Even after the Ravens traded Marquise Brown in the offseason, Jackson appears to have plenty of good targets. Rashod Bateman, who caught a 55-yard touchdown pass in the opener against the New York Jets, scored on a 75-yard catch-and-run against Miami and looks like a major threat.

The Ravens added safety Marcus Williams in the offseason, and he already has three interceptions in two games. But this was otherwise a complete mess for the secondary, and Harbaugh was candid about it.

"We'll look at the way we're preparing, how we're walking through, how we're teaching, how we're repping in practice, things like that," Harbaugh said. "Those are things that should never happen. They're below the line. I did not expect those things to happen in this game, but I also understand that we have some young guys back there."

The Ravens were dealing with health problems in the secondary. Marlon Humphrey played but has been nursing a groin injury, and Marcus Peters was in his first game back after missing all of last season with a knee injury. Safety Kyle Hamilton was a first-round pick, but he's still early in his rookie season.

There's certainly potential for improvement, but this was a bad sign for a team that faces Joe Burrow twice this season - with Josh Allen and Tom Brady on the schedule too.

It's hard for Jackson's stock to rise too much higher given that he's a 25-year-old star with an MVP to his credit, but this game felt like a step forward for him. He picked apart a defense that seemed to have solved him 10 months earlier, and at one point it looked like he might finish the game with a perfect passer rating.

And of course, his 79-yard touchdown run was a highlight.

Jackson's overall performance last weekend makes it harder to argue that teams can stop the Ravens by forcing them to pass.

While the secondary takes most of the criticism, the pass rush wasn't much of a factor either. Tagovailoa was elusive at times and did a good job releasing the ball quickly. Linebacker Odafe Oweh has received defensive grades under 50 from Pro Football Focus in each of the first two games this season. That only happened to him once last season as a rookie.

Harbaugh said LB Steven Means tore an Achilles tendon. He was carted off in the first half of Sunday's game. Baltimore put both Means and rookie LB Josh Ross on injured reserve.

2.6 - That's Baltimore's rushing average through two games for players other than Jackson. J.K. Dobbins and Gus Edwards still haven't played because of their knee injuries. Justice Hill showed some potential, but the Ravens struggled in a couple key short-yardage situations Sunday and may be relying too much on Jackson to carry the running game.

Baltimore starts the season with four straight matchups against the AFC East. Next up is a game at New England next weekend.