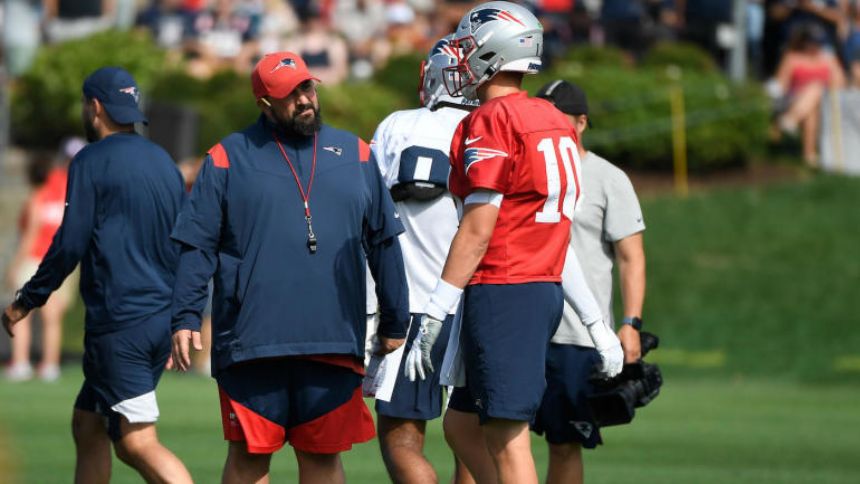 FOXBOROUGH, Mass. -- Arguably the biggest question entering Patriots training camp surrounded who would be calling the offensive plays. Without an offensive coordinator named following the departure of Josh McDaniels this offseason, that answer had been shaded in a bit of mystery. However, throughout the first handful of practices of camp, it appears Matt Patricia, who technically holds the "senior football advisor" title, is the next man up.'

In competitive 11-on-11 sessions, Patricia has largely been seen holding the walkie-talkie and calling in the plays. Sometimes, when he is working with the offensive line, quarterbacks coach Joe Judge has led the offense in 7-on-7s. But, from the outside looking in, Patricia has the inside track of claiming that role. Even if he won't say it.'

"It's great this time of year because fortunately all the plays are scripted in a row and you just read down through them from that standpoint," Patricia told reporters of calling plays in camp before Monday's practice. "We're all sharing the responsibilities based on what periods we're at in practice. So from that aspect of it, it's structured."

When asked directly if he's been informed about who'll call plays, Patricia said: "Fortunately, we don't have a game tomorrow, so we're just going to get through practice and go from there. Nothing from that [play-calling] standpoint. Everything I defer to Coach [Bill Belichick] on that. He'll handle all of it."'

Of course, this is a bit of a unique situation as most clubs in the NFL have coordinators in title, but it is not totally uncommon in Foxborough. Under Belichick, the Patriots have sometimes held off from naming coordinators on either side of the ball. Ironically enough, New England doesn't have a defensive coordinator named either and it was Patricia who last held that title before leaving for Detroit after the 2017 campaign.'

"Probably what you guys have the benefit of around here is that it's probably not unusual," Patricia said of not having coordinators in title. "There is a share of responsibility that goes on in those situations, which is great. I think the good thing is as an offensive staff that's out there, we really try to split a lot of the meetings and everyone tries to input in different areas so it's not always just the same person up there all the time and kind of giving all the information. I think everyone has little areas of expertise."'

Following up on that answer was a question that wondered if there may be too many cooks in the kitchen under this current structure.'

"I think that we have an established culture here where we understand there's input that comes across the board," Patricia answered. "Certainly, when a hard decision needs to be made, we're lucky enough that our head coach here is involved in all aspects of the game and has an expertise above everybody else, to be honest with you. When we need a push in either direction we can really rely on him, which is great to help us kind of get through any of those sticky points."

While Patricia initially started his NFL career as an offensive assistant with the Patriots in 2004, he made his bones as a coach on the defensive side of the ball. He believes that his unique perspective will only benefit him as he makes the transition back to offense and helps develop second-year quarterback Mac Jones.'

"When you can get into a room -- especially with a quarterback and the way that he sees the game -- I've obviously spent a lot of time trying to get on the other side of that and try and give the quarterbacks a hard time, give them confusing looks," he said. "I think I have a lot of insight that I can provide from some of those things that happened."'

The next mile-marker as we track how these play-calling duties will be flushed out will come in the preseason opener against the Giants on Aug. 11.'