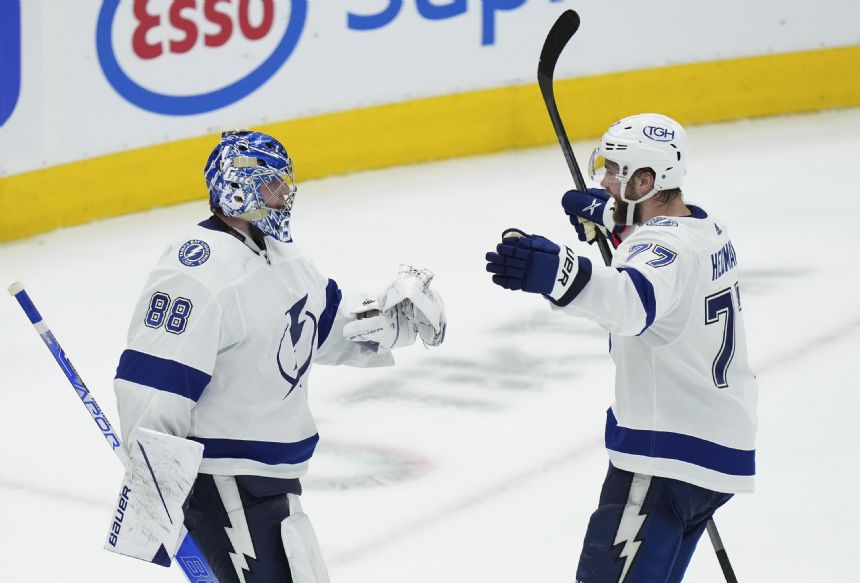 TORONTO (AP) - Nick Paul scored twice, including an incredible individual effort on the tiebreaking goal late in the second period, and the Tampa Bay Lightning beat the Toronto Maple Leafs 2-1 in Game 7 on Saturday night to win their first-round playoff series.

Andrei Vasilevskiy stopped 30 shots for the two-time defending Stanley Cup champions. The Lightning will next face the Presidents' Trophy-winning Florida Panthers in the second round.

Morgan Rielly scored for Toronto, which hasn't reached the second round since 2004 and is now 0-9 in elimination games over the last five postseasons after also losing 4-3 in Game 6 at Tampa, Florida, two nights earlier. Jack Campbell had 23 saves.

The Maple Leafs were once again unable to push through and finally flip a long, ugly narrative of playoff failures for a franchise that has now lost its last seven series, including six straight dating back to 2017.

Teuvo Teravainen also scored for the Hurricanes, who finally put away a Bruins team that had ousted them from the playoffs in two of the past three postseasons. That ended a series in which neither team could manage a road win, with the Hurricanes eventually getting the final word backed by yet another rowdy and loud home crowd.

Carolina advanced to the second round to face the winner of Sunday's Game 7 between the New York Rangers and the Pittsburgh Penguins.

Jake DeBrusk scored a second-period goal for the Bruins, while David Pastrnak had one with 21.7 seconds left with Boston having pulled Jeremy Swayman for the extra attacker. Swayman finished with 28 saves.