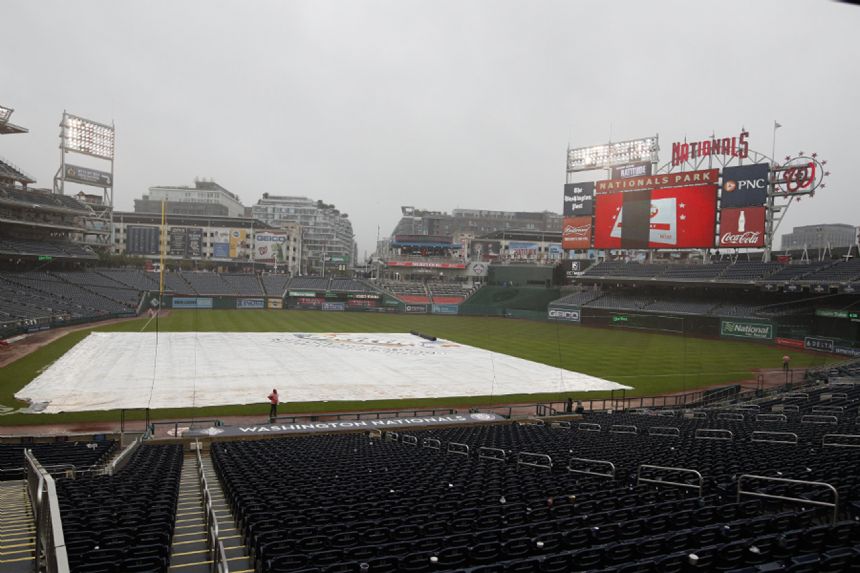 WASHINGTON (AP) - The Philadelphia Phillies picked up another key victory as they try to end an 11-year playoff drought, using three RBIs apiece from Kyle Schwarber and Bryson Stott, plus Zack Wheeler's five scoreless innings, to beat the Washington Nationals 8-1 Sunday in a rain-shortened game.

The six-inning win helped Philadelphia take three of four from the worst-in-the-majors Nationals to improve to 86-73 after getting to town on a five-game losing streak.

Wheeler (12-7) had seven strikeouts and no walks and allowed just two hits: doubles by Ildemaro Vargas in the third and Cesar Hernandez in the fifth.

NEW YORK (AP) - Aaron Judge won't break the American League home run record at Yankee Stadium, remaining at 61 as New York headed on the road for its final four regular-season games after a loss to Baltimore.

Judge struck out three times and walked once, disappointing a crowd of 44,332 that watched the Yankees regular-season home finale in rain for much of a chilly, blustery afternoon.

Trying to become the first Triple Crown winner since Detroit's Miguel Cabrera in 2012, Judge tops the AL with 130 RBIs. His batting average fell to .311, four points behind league leader Luis Arraez of Minnesota.

Aroldis Chapman (3-4) was once again wild, walking three, including rookie Gunnar Henderson with the bases loaded, as Baltimore surged ahead in the seventh.

Logan Gillaspie (1-0) pitched a scoreless sixth in his first big league decision, Baker struck out five while getting six straight outs, and Dillon Tate got three outs for his fifth save.

The Blue Jays completed a three-game sweep with their 16th win in 19 games against Boston this season. That's the most victories by any major league team against a division opponent this season and the most wins the Blue Jays have had against an opponent in a single season.

Merrifield went 3 for 3 with two RBIs and scored twice. He's 10 for 20 over his past six games.

Bobby Dalbec hit a solo home run and had three RBIs for the Red Sox.

All three Toronto homers came off Boston right-hander Michael Wacha (11-2), who allowed five runs and six hits in four innings and lost for the first time since May 31 against Cincinnati.

One pitch after Jose Altuve's leadoff bunt single, Pena belted a cutter by Rays starter Corey Kluber (10-10) over the right-field fence and into the home bullpen. That put the Astros ahead early, and Houston maintained that lead with strong pitching and key defensive plays, including Pena's diving stop and throw to deny Ji-Man Choi in the fourth inning.

After homering only once in August, Houston's rookie shortstop has five homers since September and is up to 21 for the season.

Kluber gave up six hits and just those two runs across five innings, striking out four.

The right-hander gave up both runs - one unearned -in the fourth and scattered seven hits, struck out three, walked one. Bieber finished the regular season with 198 strikeouts in 200 innings.

DETROIT (AP) - Eric Haase and Victor Reyes homered, and Detroit took advantage of Minnesota's sloppy play, including three errors in the first inning, for the win.

Twins' prospect Simeon Woods Richardson (0-1) is the youngest pitcher in the majors this season allowed three runs - two earned - and three hits in five innings. The Twins' defense did him no favors at the start, committing three errors in the first inning.

The Tigers turned the two throwing errors by catcher Ryan Jeffers and a misplay by first baseman Jose Miranda, along with Miguel Cabrera's single, a wild pitch, a walk and a stolen base, into two runs.

Alex Lange (7-4) got the win and Gregory Soto picked up his 30th save with a perfect ninth.

Nelson Velazquez drove in four runs and Seiya Suzuki had two hits and two RBIs. The Cubs, aided by three walks and a hit batter, knocked out a Chase Anderson in a five-run first and cruised to their 11th win in 12 games in their Wrigley Field season finale.

The Reds have dropped six straight and 19 of 23. They'll need to sweep a three-game series against the Cubs in Cincinnati to avoid the franchise's second 100-loss season.

Anderson (2-4) lasted just seven batters and got one out. The right-hander was tagged for five runs, walked three and gave up two hits.