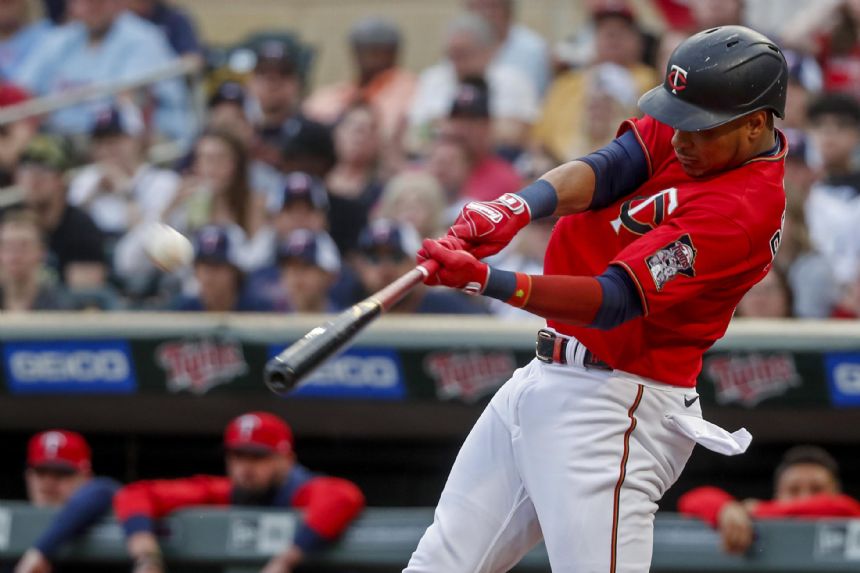 MINNEAPOLIS (AP) - Jorge Polanco homered in a four-run first inning and Carlos Correa hit a go-ahead homer in the fourth to power the Minnesota Twins to a 10-7 win over the Kansas City Royals on Friday night.

Bobby Witt Jr. finished a double shy of the cycle for the Royals, who have lost seven of eight. He singled in the first, hit a two-run triple in the third and added a solo homer in the seventh for his sixth of the season. In his bid to complete the cycle, he flew out to right field in the eighth inning with two runners on base.

Minnesota starter Bailey Ober pitched three innings, allowing three runs on five hits and one walk while striking out five. The Twins used seven relievers to close out the final six innings. Trevor Megill (1-1) was credited with the win, pitching 2 2/3 scoreless innings. Emilio Pagan got the final out for his seventh save.

Minnesota had a season-high 15 hits. Polanco's first inning two-run homer was his fifth of the season and it came in his first at-bat after missing three games with an ankle injury. Correa's solo home run was his third of the season and broke a 4-4 tie in the fourth inning to give the Twins a lead they never relinquished. Every batter from both teams reached base at least once.

Kansas City starter Brad Keller (1-5) gave up six runs and 11 hits in four innings. MJ Melendez also homered for the Royals, who fought back down four runs after the first inning.

Witt's triple scored a pair of runs and Hunter Dozier added an RBI single in the third inning. Nicky Lopez singled home a run to tie it in the fourth. Lopez finished 3 for 3 with a walk.

The game didn't remain tied for long. Correa's home run and a sacrifice fly from Trevor Larnach in the bottom of the fourth gave the Twins a two-run lead that was cut to one with Witt's home run.

Melendez's solo home run and Emmanuel Rivera's RBI double cut the Royals' deficit to three in the ninth. But Pagan came in and struck out Lopez to end the game.

The Twins placed OF Gilberto Celestino on the COVID-19 Injured List on Friday. He is experiencing "mild symptoms," Minnesota manager Rocco Baldelli said.

Royals: Manager Mike Matheny said C Salvador Perez is now "day-to-day" with a left thumb strain after his stint on the 10-day IL ended Friday. Perez joined the Royals in Minneapolis on Thursday and has participated in both batting and catching drills. Perez injured the thumb while batting on May 17 against the Chicago White Sox.

Twins: LHP Danny Coulombe returned from his rehab assignment and was reinstated from the 15-day IL on Friday. He took Celestino's spot on the 26-man roster. Coulombe missed the Twins' last 15 games with left hip impingement, and appeared in two games on rehab assignment with Triple-A St. Paul.

Coulombe faced five batters in relief Friday and allowed one run on two hits and two walks. He retired one batter.

Royals: RHP Brady Singer (1-0, 1.83) will start against the Twins on Saturday. Singer has not allowed a run in either of his two starts this season, the latest coming against Minnesota last Sunday.

Twins: Minnesota will counter with RHP Chris Archer (0-1, 3.86). Archer pitched four innings in his last start, allowing one run on three hits to the Detroit Tigers.