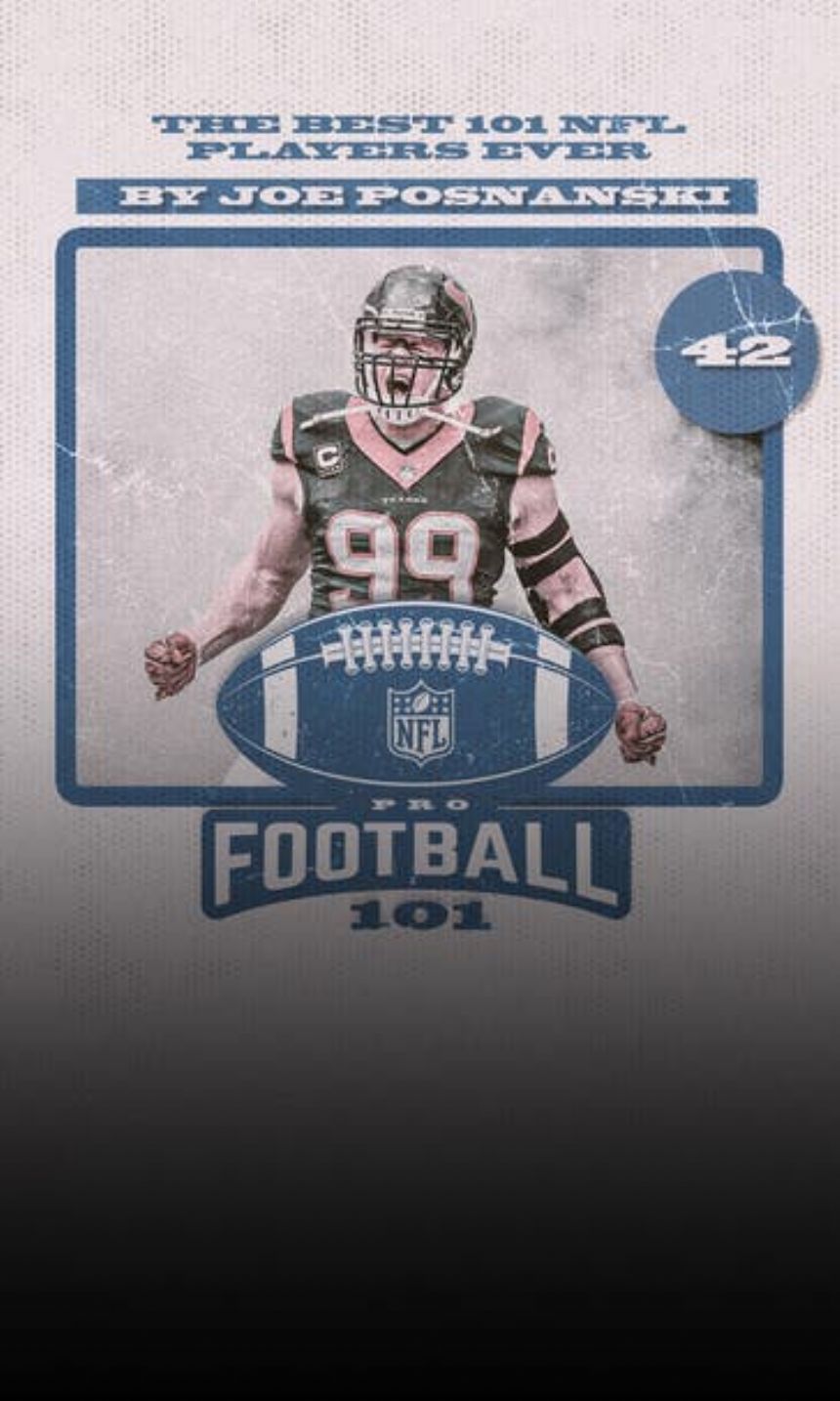 Editor's Note: Throughout 2021 and 2022, Joe Posnanski is ranking the 101 best players in pro football history in collaboration with AP Sports. Posnanski will publish a detailed look at all 101 players on Substack. The countdown continues today with player No. 42, J.J. Watt.

Nobody seemed especially excited about J.J. Watt when he came out for the 2011 NFL Draft. But, hey, that was pretty much the story of his life up to that point.'

It's funny looking back now - after Watt has turned into not only one of the greatest defensive players in NFL history but also one of the most famous athletes in America - that there was a long stretch of time when people simply didn't notice him.

I mean, the guy's whole dream growing up in Waukesha, Wisconsin, was to play football at the University of Wisconsin. He started telling people he was going to do that when he was 7. And he made himself into a star high school football player - at least everybody in Waukesha thought so. He was All-State. He was a hero around town.

But the summer before his senior year, he got mono and wasn't able to play in any of the summer camps, and he was rated a two-star recruit by the services. That won't get you to Wisconsin ... and sure enough, Wisconsin didn't give Watt a second glance. He signed to play tight end at Central Michigan, and after his first game - his very first game - he knew that he'd made a terrible mistake.

He had dreamed about playing at Wisconsin. And, damn it, he was going to play at Wisconsin. He asked his parents if they could help him pay for college at Wisconsin so that he could walk on. They agreed, on one condition.

"Every single play for you," his father, John, told him, "had better be like the Super Bowl."

J.J. Watt didn't need to be told twice. He left Central Michigan, went home, got a job as a delivery guy for Pizza Hut, went to Wisconsin to play on the scout team, and played like a madman. Before the end of camp, he would manage to tick off each and every member of Wisconsin's vaunted offensive line because they were playing to win, and he was playing for his life.

"I had to earn a scholarship," Watt told Sports Illustrated's Tim Layden. "I'm sure I made some people not like me. I didn't care."

Of course he didn't care. Watt tells a great story about when he was delivering pizzas. He went to one house, and a young boy answered the door. The boy looked up and said, "You're J.J. Watt. What are you doing here?" And Watt said, "I'm here to deliver your pizza."

And he could see the extreme confusion the boy was feeling - why was the great J.J. Watt, the town's biggest football star, delivering a pizza? Watt would say he did not feel embarrassed ... that's not the right word. He felt motivated. He was going to be that star again. He earned his scholarship before he ever played a snap at Wisconsin.

He was a very good and beloved player at Wisconsin, but interestingly, he was not a first-team All-American. The big award he won was the Ronnie Lott Award, which considers both performance and character.'

That fit. Pretty much everybody admired J.J. Watt for the way he played and for his perseverance - in his last game at Wisconsin the crowd chanted his name - but at the same time people didn't seem to get all that excited about his play. Even after he declared for the draft and had an incredible performance at the combine - 37-inch vertical jump, 34 bench-presses, 4.8 40-yard dash - the NFL scouts and draft experts were pretty mixed.

And when Houston took him with the 11th overall pick, it's probably fair to say that only one person in town was entirely thrilled. Many Texans fans wanted them to pick a quarterback to replace Matt Schaub (and Christian Ponder was right there!). Many wanted them to take defensive back Prince Amukamara, who admittedly had a cooler name. Still others thought that the 11th pick was too high for a serviceable but not game-changing defensive lineman.

There's a pretty famous video you can find on YouTube of a Houston draft watch party, and if you haven't seen it, these are the highlights.

- The Texans' fans booed lustily when Watt's name was announced.

- The television reporter did find one fan who liked the pick - he shouted "Whoo! J.J. Watt!" - but upon further questioning from the reporter, the fan admitted he actually had never heard of J.J. Watt. He just liked being on TV.

When the Texans announced the pick on Facebook, it was followed by a bunch of comments like "BOOOOOOOO!" and "Nooooooooo" and "Why????????" and some more serious criticisms such as "Not a wise pick," and "I'm done."

"There have been disappointed people, and that's fine with me," Watt would say. "I've been doubted before."

There was one person who was thrilled with the pick: Houston defensive coordinator Wade Phillips. He was the one who pressed the Texans to draft Watt. Phillips had been coaching in the NFL for 35 years by then, and he grew up around football as the son of the legendary Bum Phillips, and when he saw Watt play, he saw little pieces of the greatest defensive linemen he'd ever seen.

To Phillips, Watt had some of Reggie White's power*, some of Bruce Smith's flexibility and quickness, and some of Curley Culp's relentless energy and ability to take on double- and triple-teams.

*White was Watt's favorite player growing up in Wisconsin.

And what Phillips would find was that Watt also had something extra, something all his own, something perhaps everybody missed: He always knew where to be. The old Kansas State basketball coach Jack Hartman used to say that talent is just being where you're supposed to be and doing what you're supposed to do.

And that's Watt. You watch his highlights, and you won't often see him simply plowing over a blocker the way Reggie White would or picking up an offensive lineman and tossing him aside the way Randy White did. He can do that stuff, but what he mostly does is follow the path that his GPS-calibrated mind sets for him and get to the ball in time to make a game-changing play.

His most famous one of those probably sums it up best. That happened in his rookie season, Texans vs. Bengals in the AFC wild-card game. Late in the first half, with the score tied at 10, Cincinnati's Andy Dalton took a three-step drop and fired to his right. Watt couldn't have been more than three or four yards in front of the throw, but somehow he read the play, jumped up, cleanly caught the ball and ran 29 yards for a touchdown.

"I have never heard a stadium so loud," he would say.

Three years later, Watt would do pretty much the exact same thing to Buffalo quarterback E.J. Manuel, only this time he ran it back 80 yards for the touchdown.

Twice he has sacked quarterbacks after having his helmet yanked off by a blocker.

Watt is the only player in NFL history with two 20-sack seasons. He is one of only three players - Lawrence Taylor and Aaron Donald are the others - to be named the Associated Press Defensive Player of the Year three times.

He has been named Sports Illustrated's Sportsperson of the Year.

You probably won't have your pizza delivered by him anytime soon.

Watt's frantic and ferocious style guaranteed that he would not have a long career - it was something he talked about openly in that interview with Sports Illustrated. In his first five seasons, he had 74.5 sacks, was All-Pro four times and won those three Defensive Player of the Year Awards.

Then came the injuries. He had a couple of back surgeries in 2016. He broke his leg in 2017. Then in 2018, he was healthy again, and he was an All-Pro again, picking up 16 sacks and finishing second in the Comeback Player of the Year voting behind Andrew Luck.

Then came more injuries and just the general wear and tear that comes with playing football the way he plays it. But at 33, J.J. Watt is still out there, playing as much as he can for the Arizona Cardinals. He's not the force of nature he once was, but he's still effective on the field and one of the most likable and admirable players off it. His charity work is well known. His hurricane relief efforts are well known. But then, beyond that, he just seems like such an awesome person.

Just a couple weeks ago, he had a wonderful Twitter exchange with actress Julia Louis-Dreyfus.

We all want to be J.J. Watt's friend.

Joe Posnanski is a New York Times bestselling author and has been named the best sportswriter in America by five different organizations. His latest book, "The Baseball 100," came out last September.