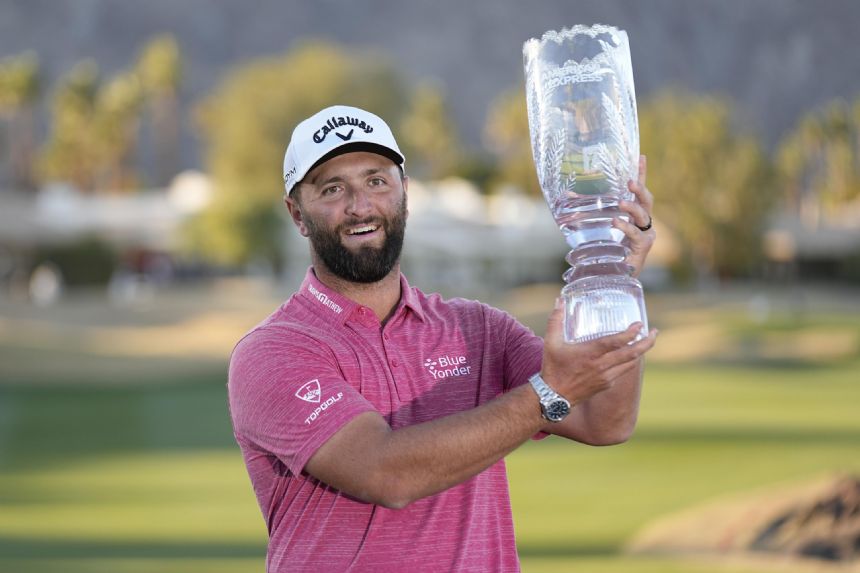 LA QUINTA, Calif. (AP) - Jon Rahm took advantage of mistakes by rookie Davis Thompson over the adventuresome final three holes and closed with a 4-under 68 to win The American Express by one stroke on Sunday, his second PGA Tour win in as many starts this year.

They were tied with three holes to play when Thompson, who led through 36 holes and shared the lead with Rahm going into Sunday, pulled his drive into a deep fairway bunker on the par-5 16th and wound up with par. Rahm made birdie to take the lead.

On the par-3 17th, Thompson chose to leave the pin in for his 50-foot birdie putt on the island green, and the ball squarely hit the pin and rolled away. The 23-year-old from Georgia dropped his putter and put his hands to his face. As he walked to the 18th tee after tapping in, he pulled his shirt up over his mouth in frustration.

Rahm hit his tee shot into the bunker on 18 but recovered nicely with a shot to 15 feet and pumped his fist. Thompson drove onto the fairway but his approach bounced on the green and ran down the slope behind it. The rookie hit a bold flop shop that settled a foot to the right of the hole. He shot 69.

Rahm had two putts to finish at 17-under 261 and win for the ninth time on the PGA Tour. He moves up one spot to No. 3 in the world. He is playing next week at Torrey Pines, while world No. 1 Rory McIlroy makes his 2023 debut in Dubai on the European tour.

Rahm now has won four of his last six starts - he won the Sentry Tournament of Champions in Hawaii to start the year, and he won twice on the European tour at end of last year. This was his seventh straight top 10 worldwide, a streak that began after the Tour Championship in late August.

ORLANDO, Fla. (AP) - Brooke Henderson closed with a 2-under 70 at Lake Nona to complete a wire-to-wire victory in the season-opening Hilton Grand Vacations Tournament of Champions on Sunday.

In windy and sometimes difficult conditions, the 25-year-old Canadian played steadily, making sure not to give much hope to a group behind her trying to mount any sort of challenge. She began her day leading by three and eventually won by four, finishing the event at 16-under 272. It was her 13th LPGA victory.

Henderson has had her eye on a Tournament of Champions title for a while. She hadn't finished outside of ninth in the event the past four seasons, and she was a runner-up to Danielle Kang a year ago. Sunday marked her 16th consecutive round under par on the LPGA dating to 2022, and her 16th consecutive score under par in this tournament.

Second-year LPGA pro Maja Stark of Sweden showed a nice finishing kick by shooting 5-under 31 on her final nine. She tied for second alongside England's Charlie Hull. Both shot 69, Hull doing so for the fourth consecutive day.

Nelly Korda, at No. 2 the highest-ranked player in this winners-only field because No. 1 Lydia Ko skipped the tournament after getting married, made only three birdies and settled for fourth for a second consecutive year.

ABU DHABI, United Arab Emirates (AP) - Victor Perez won the Abu Dhabi Championship by one stroke on Sunday for the third and biggest European tour title of his career. His 6-under 66 included one of the biggest shots of the Frenchman's career.

Perez led by one when he sent his tee shot on the 17th hole short and into a greenside bunker. His second shot went about 10 feet beyond the cup and spun back into it, leading to Perez leaping out of the sand and chest-bumping his caddie.

A bogey at the last - when he drove into a bunker and hit his second shot nearly into water - was enough for the 30-year-old Perez to claim a winner's check of $1.53 million and boost his chances of playing for Europe at this year's Ryder Cup outside Rome.

His previous wins on the tour came at the Dunhill Links Championship in 2019 and the Dutch Open in May last year.

Perez finished at 18-under par for the tournament, with Sebastian Soderberg (67) and Min Woo Lee (68) tied for second place.

KA'UPULEHU-KONA, Hawaii (AP) - Steve Stricker competed for the first time in three months and nothing changed. He began the PGA Tour Champions year by closing with a 7-under 65 for a six-shot victory in the Mitsubishi Electric Championship at Hualalai.

Stricker seized control with a 60 in the second round for a two-shot lead, and with three birdies in four holes at the start, no one got closer the rest of the way.

The tournament ended on Saturday.

Stricker now has four PGA Tour Champions wins in his last five starts, ending last year with consecutive victories before taking off the postseason to enjoy the Wisconsin outdoors.

Steven Alker, the Charles Schwab Cup champion last year, closed with a 63 and earned a share of second place with Ken Tanigawa (66), Mike Weir (66) and Darren Clarke (68), who missed an 8-foot birdie putt on the final hole.

Stricker now has 12 career wins on the PGA Tour Champions, the same number of titles he has on the regular PGA Tour. He finished at 23-under 193 and earned $340,000 for the lead in the Schwab Cup.