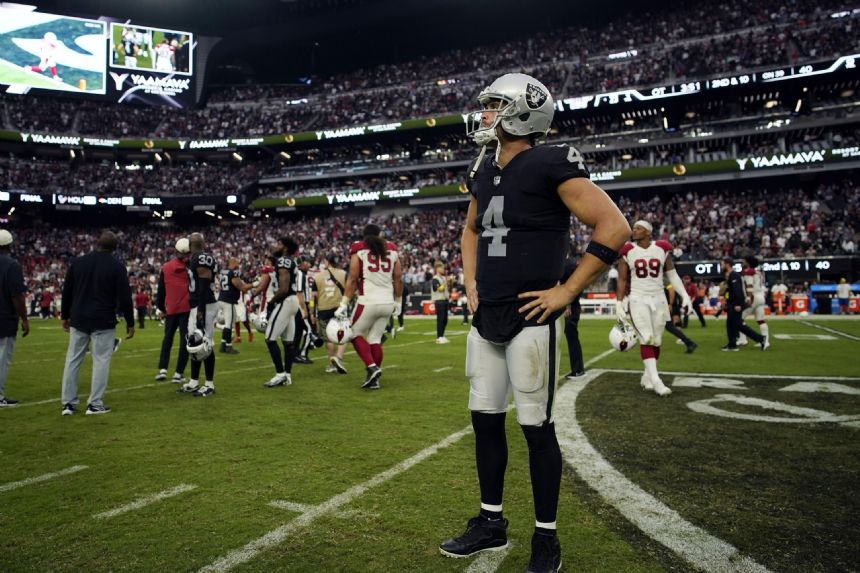 LAS VEGAS (AP) - On the same day one of Mark Davis' two professional teams made franchise history in championship fashion, the other did so in a brutal manner.

For the first time, the Raiders lost a game they led by 20 or more points when Las Vegas blew a 20-0 halftime lead and fell to the Arizona Cardinals 29-23 in overtime on Sunday.

Roughly four minutes after Davis personally watched the Las Vegas Aces win the franchise's first WNBA championship in Connecticut, the Cardinals completed an 11-play, 94-yard drive to put their first points on the board with 6:08 left in the third quarter to make it 20-7.

It was clear Arizona quarterback Kyler Murray was on a mission - and the Raiders defense could be in for a long second half.

Whether he used his arm for one of his 25 second-half completions, or his explosive legs to run Las Vegas' defenders ragged both horizontally and vertically - like when he scrambled a total distance of 84.9 yards for a 2-point conversion, per NFL Next Gen Stats - the Raiders couldn't counter.

"I think that's something we've just got to be prepared for," Raiders CB Amik Robertson said. "Of course our opponent's going to make their runs, we're going to make our runs. What's important in those moments, you've just got to dig a little deeper. I feel as a defense that's what we did."

The Raiders, whose previous biggest collapse was 18 points (three times), had their own role reversal in the second half after gaining 258 yards on 38 offensive plays through the first two quarters. After halftime, Las Vegas gained just 66 yards on 24 plays.

After committing only three for 11 yards in Week 1, the Raiders committed 10 for 68 - six that affected significant plays or drives. On offense, two wiped out what would have been first downs, and on defense, an interception, two sacks, and a fourth-down stop were all negated.

"That just comes down to discipline," cornerback Nate Hobbs said. "If it is something that we can't help, we only control what we can control ... all we can do is (watch) film and get better off of it and try to keep it to a minimum."

"We'll have to look at what we didn't do in the second half specifically," Raiders coach Josh McDaniels said. "At the end of the day, we didn't produce much on early downs, and we found ourselves trying to convert a lot of third-and-longs."

After converting on five of six opportunities on third down in the first half, the Raiders went just 1 for 5 in the second.

"We - WE - have to learn to win," Raiders quarterback Derek Carr said. "And it starts with me, and it always will. For the execution that we had in the first half, we did not execute each play with the detail I think we should have the way that we did in the first half."