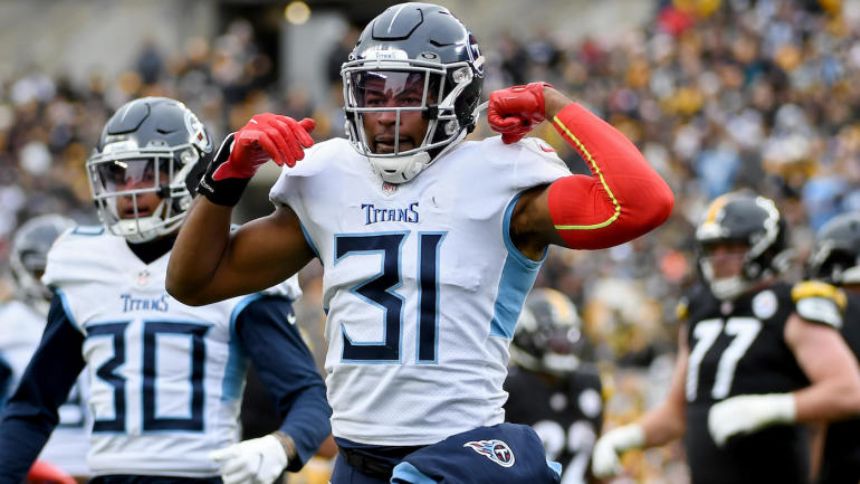 We are firmly in the dead zone of the NFL calendar, so what better way to pass the time before the start of training camp than combing through various positions and rolling out a top 10 list? That's been the task here at AP Sports over the last few days/weeks and as we move from the offensive side of the ball to the defensive side, we'll specifically be looking at the safety position and ranking our top players from that position group heading into the 2022 season.'

As for how we've determined this list, we sifted through various categories including basic stats, advanced analytics like Pro Football Focus' coverage grades, along with Pro Football References's Approximate Value. Because the safety position is a bit more diverse than some others with these defensive backs lining up in different areas of the field in some cases, we also tried to include different types of safeties throughout this list to have each playing style represented.

With all that out of the way, let's jump in.'

Amos continues to be one of the more underrated safeties in the NFL. While he doesn't have many highlight plays on his resume, he is a sound defensive back that is seemingly always in the proper position making him one of the more well-rounded players on this list. Last year, he lined up in the box on 317 snaps, had 573 snaps at free safety, and 141 in the slot, highlighting his versatility. He's also been Pro Football Focus' highest-graded safety over the last two seasons. In 2021, opponents caught just 58.2% of their targets against Amos (career-low). That said, the six touchdowns allowed were less than ideal. One last feather to put in Amos' hat is his durability. He's started in every regular-season game for the Packers dating back to 2018 and has played at least 97% of the defensive snaps over that stretch.'

Feel free to swap in Micah Hyde in here if you'd like as he and Poyer make up arguably the best safety duo in the NFL and I wouldn't fight you too hard if you felt one was better than the other. With Poyer landing first-team All-Pro honors last season and just edging out Hyde in Approximate Value, however, this is the way I'm leaning. Poyer was tied for first among safeties in AV last season and was part of a Buffalo secondary that ranked No. 1 in the NFL in DVOA even without star corner Tre'Davious White for the back half of the year. Among safeties that played at least 50% of the defensive snaps, Poyer earned the second-best coverage grade and allowed a reception rate of just 48.1%. In 16 games played during last season, he matched a career-high five interceptions and had a career-best three sacks.'

It is an end of an era with Tyrann Mathieu and the Chiefs breaking ties this offseason. While he'll no longer be lurking in the K.C. secondary, New Orleans is getting one heck of a versatile weapon. The Saints will be able to line Mathieu up however they see fit. He primarily lined up as a box safety (438 snaps) but had a healthy amount of work as a free safety (280 snaps) and in the slot (206). His Approximate Value ranked eighth in the league last year among safeties and helped him to a second consecutive Pro Bowl nod. Even as he heads home to New Orleans and away from the Chiefs, Mathieu should still be one of the best defensive playmakers that the NFL has to offer.

Antoine Winfield Jr. wasted no time making a name for himself as one of the best young safeties in the league. He helped the Bucs to a Super Bowl title his rookie year and followed that up with a coverage grade by PFF that ranked fifth among eligible safeties. The 23-year-old has tremendous vision in coverage and allowed a passer rating of just 63.9 last season. He also wasn't responsible for a single touchdown allowed by the Bucs last season. Unlike some other safeties on this list, Winfield primarily lurks as a free safety and doesn't migrate too often into the slot or line up in the box. Still, there's no denying that he's one of the premier pass defenders at his position. What's even crazier is that he's just about to enter his third season in the NFL.'

The strong safety is something of a dying breed with linebackers becoming more versatile, but Budda Baker is a defensive back that strikes fear into ball carriers. Over his five-year career, PFF has him tallying 160 stops (tackles that result in a failure by the offense), and is coming off another All-Pro caliber season in 2021. In 17 games for the Cardinals, he totaled 98 tackles and two sacks. While he's largely known for being one of the more physical safeties in the game and dominant against the run, he allowed a 78.6 passer rating in coverage last season (career-high). Baker also has shown plenty of versatility playing as a free safety, lining up in the box, as well as in the slot. '

Williams just inked a five-year, $70 million deal with the Baltimore Ravens this offseason. That deal alone should tell you what kind of player we're looking at here. The 25-year-old is one of the more consistent and elite players at his position essentially since he's come into the league. He was the seventh-highest graded player in coverage last season among eligible safeties, per PFF. Williams also allowed a passer rating of just 54.2 in 16 games played for the Saints in 2021. Unlike most of these safeties, Williams essentially plays exclusively as a free safety, logging 922 snaps in the back of New Orleans' secondary last season. Even without the versatility, he's someone that raises the ceiling to your defense when he's in the outfield.'

While Denver's secondary wasn't exactly elite in 2021 (20th against the pass in DVOA), Simmons continued to play at a high level. He was tied for second among safeties in Approximate Value and his 59.4 passer rating allowed was the eighth-lowest among eligible safeties last year. Simmons's production has come down statistically from his career year in 2019, but he's been much more consistent over these last three seasons compared to the first half of his six-year NFL career. The 28-year-old has also moved around inside Denver's defense over the years and saw 310 snaps as a box safety in 2021, but largely has worked on the back end of the secondary, seeing 639 snaps at free safety. With the Broncos offense set to be much improved this year with Russell Wilson at the helm, Simmons -- along with the rest of the Denver D -- could be in more advantageous positions this coming season.'

Bates struggled throughout the course of the regular season but looked more like the elite safety we've grown accustomed to in the postseason as the Bengals made their march to a Super Bowl appearance. During that playoff run, Bates totaled two interceptions, allowed opposing quarterbacks to combine for a 35.6 passer rating, and opposing receivers hauled in just 36.4% of their targets against him. That mirrors the second-team All-Pro play we saw in 2020, so we won't hammer Bates down too much here. He should still be considered among the top safeties that the NFL has to offer. The biggest question surrounding him is really more about his contract status and his future in Cincinnati.'

When healthy, Derwin James is as good as they come at the safety spot. After being limited to just five games from 2019 to 2020, the 25-year-old played 15 games for the Chargers in 2021 and lit it up. Similar to what we saw from him during his rookie season in 2018, James earned first-team All-Pro honors and was an anchor for Los Angeles' defense. He has shown the ability to work all over the field and cover all positions (running backs, tight ends, and receivers) to an elite degree. He's spread around pretty evenly in the box (361 snaps), slot (224), and as a traditional free safety (326). No matter where L.A. decided to line him up, James was dominant. He allowed a 71.9 passer rating overall but was even better when covering the slot, allowing a 68.4 passer rating (fifth-best among eligible safeties). Whatever Brandon Staley needs to be done in the secondary, James not only can do it but arguably do it better than anyone in the league. The biggest thing preventing him from being the consensus best safety in the NFL is health.'

Coverage is the name of the game in the NFL and you'll have to look hard to find a safety who is better at defending the pass than Byard. The Titans defensive back was the highest-graded safety in coverage last season by PFF and was tied for No. 1 in the NFL in Approximate Value among players at his position. Opposing pass-catchers hauled in just 63.5% of their targets against Byard and he piled up the stat sheet, totaling five interceptions, 13 pass breakups, 88 tackles, and two forced fumbles. On top of his ability against the pass, the 2021 first-team All-Pro is a sure tackler, only missing 2.2% of his tackle attempts last season. Byard has also been versatile throughout his career and saw plenty of action in the box (331 snaps) last season along with his more familiar spot manning the outfield as the free safety (603 snaps). He also logged 161 snaps in the slot. While he's always been among the elite safeties in the NFL, Tennessee finally establishing some semblance of a pass rush in 2021 allowed Byard to flourish. '