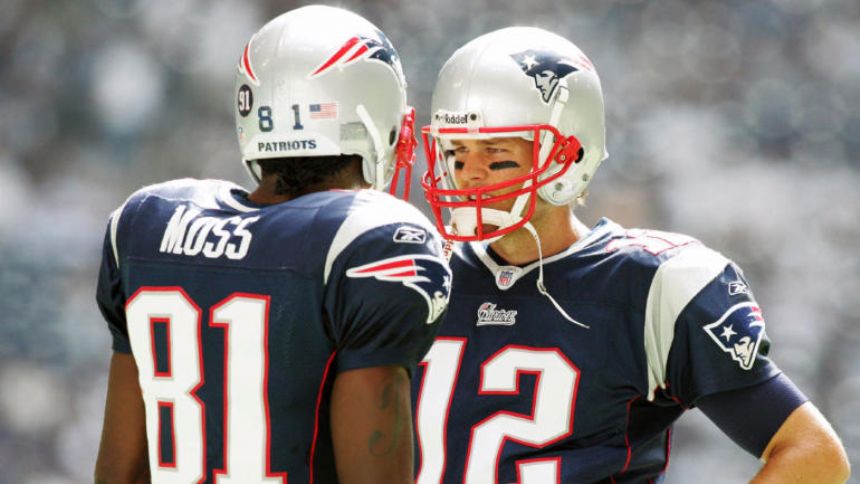 "It's not the destination, it's the journey."

Ralph Waldo Emerson's quote came to mind when compiling the list of the NFL's best teams of the 21st century. Far too often, the end result is the only thing looked at when reviewing history. Yes, the ring is the thing when it comes to legitimizing a season or even a career, but it's not everything. Sometimes, the best team isn't the one that is celebrating under a confetti blizzard.

That brings us to our list of the NFL's greatest teams of the 21st century. While the majority did win the Lombardi Trophy, several failed to win a world title. But we didn't let their lack of postseason success cloud our judgment.'

Among our criteria when making the list was: who do we think would win a game between a particular team and the other great squads of the 21st century? For example, would the 2000 Ravens or 2002 Buccaneers defeat the 2007 Patriots? As great as Baltimore and Tampa's defenses were, it's hard to fathom Trent Dilfer and Brad Johnson playing well enough to defeat New England's defense, given how Matt Ryan fell short in his quest of doing so in Super Bowl LI. '

Here is the rest of our criteria used to make the list. '

You can't have a non-championship season better than this one. In fact, the only thing the '07 Patriots didn't do was hoist the Lombardi Trophy. The only undefeated team during the NFL's 16-game regular season format, the Patriots' average margin of victory during the season was a gaudy 19.7 points. Brady set an NFL record for TD passes, while Moss' single season record for TD receptions remains the all-time mark.'

The defense included Hall of Fame linebacker Junior Seau, two-time All-Pro safety Rodney Harrison, and 2007 Pro Bowlers'Vince Wilfork, Mike Vrabel, and Asante Samuel. The unit held 12 of their opponents to under 20 points, including their opponent in Super Bowl XLII: the'New York Giants. The Giants' pressure of Brady, along with a miracle helmet catch, prevented the Patriots from completing the greatest season in league annals.'

Two years removed from their Super Bowl win, the "Greatest Show on Turf" was an'Adam Vinatieri'Super Bowl kick away from possibly winning a second title. Warner led an offense that featured fellow Hall of Famers Isaac Bruce, Marshall Faulk and Orlando Pace. The unit scored 501 points in the regular season, 45 against the'Packers'in the divisional round and 29 against a tough'Eagles'defense in the NFC Championship Game.'

Many forget that the Rams boasted the NFL's seventh-ranked scoring defense that year, led by Hall of Fame cornerback Aeneas Williams, linebacker London Fletcher and defensive end Grant Wistrom. The unit picked off Brett Favre'six times'in the divisional round, then came up with the game-winning pick of Donovan McNabb in the NFC title game. The Rams were stunned by the Patriots in the Super Bowl, 20-17.

The '07 squad may be their best team, but the '16 team may very well be the Patriots' best championship team of the Tom Brady/Bill Belichick era. This was a balanced squad that had the league's greatest quarterback at perhaps his most driven point, as he was forced to watch the first quarter of the season due to a suspension. The Patriots went 3-1 without Brady, then proceeded to go 14-2 with him back under center.'

New England blew past the Texans and Steelers in the AFC playoffs before finding themselves on the wrong side of a lopsided score against the'Falcons'in Super Bowl LI. But in a moment that would define their dynasty, the Patriots overcame a 28-3 deficit to win the first Super Bowl that was decided in overtime. Brady was his masterful self during the comeback, but it was a team effort. Brady's skill position teammates, specifically'Julian Edelman,'Danny Amendola'and'James White, made a bevy of big plays during the comeback. The defense also came up with several critical plays, none bigger than'Dont'a Hightower's'strip-sack of'Matt Ryan'that jumpstarted the comeback.'

After a slow start, the Chiefs closed out the season on an eight-game winning streak, capped off by their 31-20 win over the'49ers'in the Super Bowl. When Kansas City found its momentum, its offense was almost unstoppable during that run. The Chiefs scored 51 unanswered points in their divisional round playoff win over the'Texans'after trailing 24-0. Trailing 20-10 late in the Super Bowl, the Chiefs scored three touchdowns in five minutes to claim the franchise's first title in 50 years.'

Patrick Mahomes'led the offense while becoming the first player to win league and Super Bowl MVP honors before his 25th birthday. He was complemented by tight end'Travis Kelce'and'Tyreek Hill, who both made big plays down the stretch against the 49ers. Kansas City's defense was bolstered by safety'Tyrann Mathieu, whose play helped the Chiefs find their stride during the second half of the season.'

An extremely balanced team, Seattle dominated a talented Broncos team on football's biggest stage.'Russell Wilson'and'Marshawn Lynch'led an offense that was top 10 in most major categories. The Seahawks' defense, regarded as one of the league's best since the start of the millennium, was led by a dominant secondary that featured'Richard Sherman,'Earl Thomas, and Cam Chancellor.'

In the playoffs, Seattle's defense held a Drew Brees-led offense to a mere 15 points. They then held the defending NFC champion 49ers to just 17 points in the conference title game. But those performances paled in comparison to what they did in Super Bowl XLVIII. The Seahawks' defense scored as many touchdowns as Denver's record-setting offense and didn't allow a Broncos' score until the game was well out of hand. Appropriately, a member of Seattle's defense, linebacker'Malcolm Smith, was named Super Bowl MVP.'

New Orleans stormed out to a 13-0 start, then proceeded to defeat the the defending NFC champion (Cardinals), the NFC's No. 2 seed (Vikings) and the AFC's top-seeded team (Colts) in the playoffs. Drew Brees led a Saints offense that led the league in scoring during the regular season, then scored 45, 31 and 31 points in three playoff games.'

The Saints' offense was the headliner, but the defense played a key role in New Orleans' first championship. It forced eight turnovers in the playoffs, including'Tracy Porter's'game-clinching pick-six of'Peyton Manning'in the Super Bowl.'

This was a battle between Pittsburgh's two title-winning teams of the 2000s. The nod ultimately went to the '05 Steelers based on their superior play on the offensive side of the ball. Led by Willie Parker and Jerome Bettis, Pittsburgh finished fifth in the NFL in rushing that season. The offensive line, which included Hall of Fame guard Alan Faneca, provided solid protection for Ben Roethlisberger, whose performance during the AFC playoffs has been vastly underrated and under-appreciated.'

When Roethlisberger struggled (as he did in Super Bowl XL), Pittsburgh's defense was there to pick him up. The unit dominated the top-seeded Colts in the divisional round and overwhelmed the Broncos' offense in the AFC title game. The unit featured several of the best players at their respective positions in Troy Polamalu, Joey Porter, Aaron Smith, Casey Hampton and James Farrior.'

On paper, the the '05 Colts were the better team. But that team fell short against the Steelers in the divisional round, partly because of their kicker. The '06 Colts fixed that by acquiring Adam Vinatieri, arguably the greatest kicker in league history. The former Patriot made five field goals in the Colts' 15-6 playoff win over Baltimore. A week later, he helped his new team defeat his old one as the Colts overcame a 21-3 deficit against New England.

The Colts' complete team balance was on display in the Super Bowl. Playing in less than ideal conditions, Indianapolis leaned on running backs Dominic Rhodes and Joseph Addai, who combined who tally 264 total yards on 51 touches. Manning threw a key touchdown pass to Reggie Wayne, while the Colts' defense, which included pass rusher Dwight Freeney and Bob Sanders, sealed the 29-17 win over Chicago with a pick-six.'

Green Bay's 2011 squad that went 15-1 was considered here, but their Super Bowl-winning team was a much more balanced unit, which is a big reason why they finished the season with the Lombardi Trophy. The 2010 Packers lost six games, but each one was by single digits and two of those defeats occurred in OT.'

After an 8-6 start, the Packers won their final six games that included playoff wins in Philadelphia, Atlanta and Chicago. Aaron Rodgers, who played like a man possessed throughout Green Bay's playoff run, won Super Bowl MVP honors after carving the Steelers' formidable defense to the tune of 304 yards and three touchdowns. Despite Hall of Fame defensive back Charles Woodson's injury, the Packers' defense was still able to come up with two of the game's biggest plays: Nick Collins' pick-six and Clay Matthews' forced fumble that set up the game-winning score.'

The fourth NFC team in history to win 15 regular season games, the Panthers dethroned the two-time defending conference champions in the divisional round before blowing out a talented Arizona team in the NFC title game. Peyton Manning,'Von Miller'and the rest of the'Broncos'prevented the Panthers from winning the franchise's first Lombardi Trophy.'

Newton enjoyed a banner year; he became the first player in NFL history to throw 35 touchdowns and run for 10 in the same season. Carolina's defense, led by'All-Pros'Luke Kuechly,'Josh Norman'and'Thomas Davis, forced 11 turnovers in the playoffs after tallying 39 takeaways during the regular season.'

San Diego's quest for the franchise's first Super Bowl came crashing down in the divisional round against (who else?) the Patriots. The Chargers took an 11-point lead before Brady caught fire with three touchdown passes. Four turnovers and a missed field goal on the game's second-to-last play sealed the Chargers' fate.'