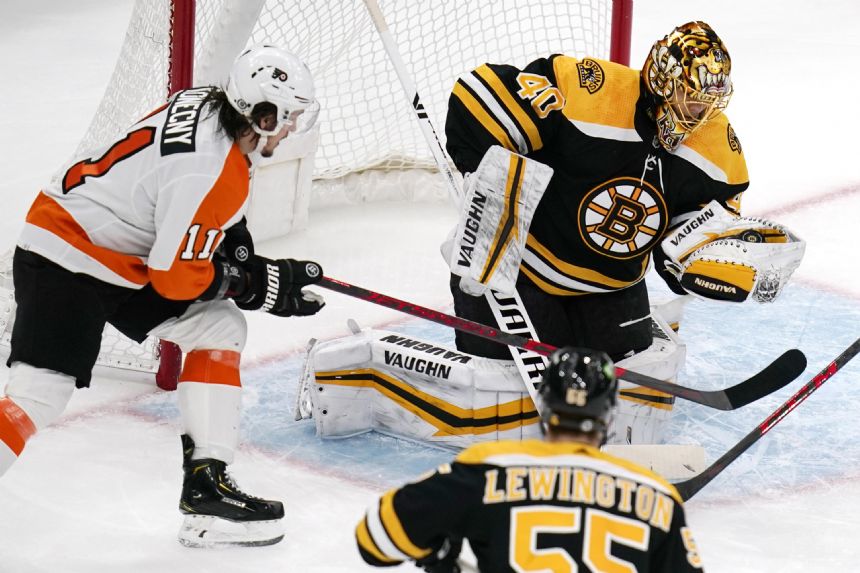 BOSTON (AP) - David Pastrnak scored a hat trick, Tuukka Rask made 24 saves in his return from hip surgery and the Boston Bruins beat the Philadelphia Flyers 3-2 on Thursday night.

Rask, the winningest goalie in franchise history, made his season debut after recovering from surgery last summer to repair a torn labrum. Rask was solid in net and got plenty of help from his teammates, who held Philadelphia to 27 shots as the Bruins won their fourth straight and seventh in eight games.

Cam Atkinson and Joel Farabee scored for Philadelphia, which lost its sixth in a row. Carter Hart finished with 33 saves, keeping the Flyers close despite a listless start.

Pastrnak completed his 11th career hat trick with a power-play goal late in the second period after Philadelphia had scored twice to tie it.

Anthony Cirelli, Boris Katchouk and Brayden Point also scored for the Lightning. Katchouk made it 3-1 at 11:24 of the third period during a 2-on-0, and Vasilevskiy stopped Elias Pettersson's breakaway after the ensuing faceoff.

Matthew Highmore and Tyler Motte each had a goal and an assist, and Thatcher Demko stopped 17 shots for the Canucks, who are 8-2-1 since Bruce Boudreau replaced Travis Green as coach last month.

The Hurricanes were shut out for the first time this season.

Carolina goalie Frederik Andersen gave up four goals on 32 shots before being pulled after Laine and Chinakhov scored 32 seconds apart early in the third period.

Josh Bailey and Adam Pelech also scored, and Zach Parise added two assists for the Islanders. New York extended its point streak to five games (4-0-1). Ilya Sorokin made 30 saves in his ninth win of the season.

Yegor Sharangovich and Nathan Bastian scored as the Devils lost for the third time in four games. Jon Gillies made 22 saves in his first start since Dec. 19.

Lane Lambert led the Islanders behind the bench with coach Barry Trotz in COVID-19 protocol.

DETROIT (AP) - Connor Hellebuyck made 33 saves for his second shutout of the season and Andrew Copp scored twice in Winnipeg's victory over Detroit.

Kyle Connor added an empty-net goal to cap Winnipeg's first game since a 7-1 loss in Colorado a week ago and just its fourth since Dec. 19. The Jets, who dressed six players on emergency recall, had seven postponements during that stretch.

Alex Nedeljkovic stopped 29 shots for the Red Wings, shut out for the fifth time this season.