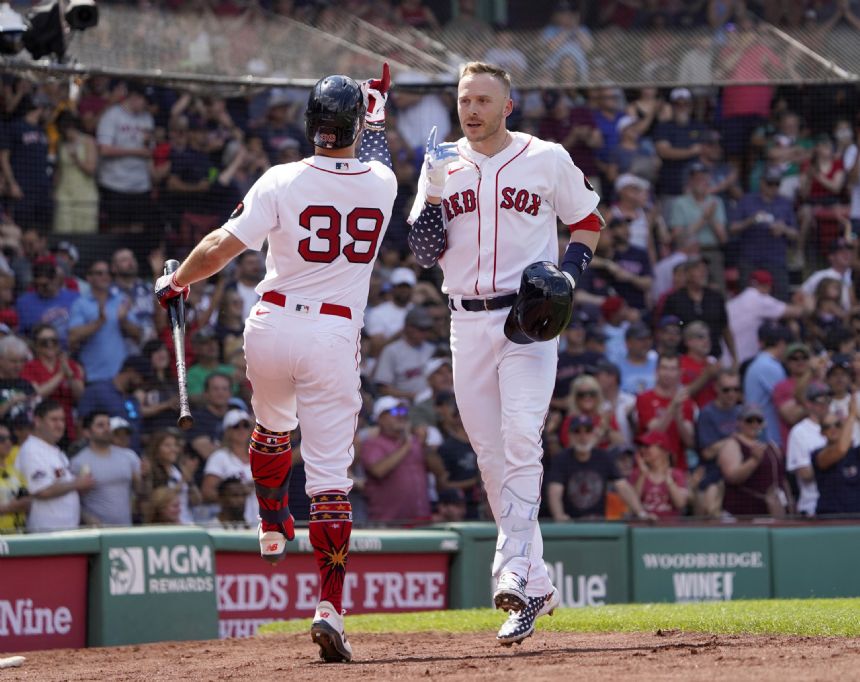 Franchy Cordero added an RBI single for the Red Sox, who won their second straight game and improved to just 9-16 against AL East rivals.

With a handful of its players wearing long sleeves with stars and stripes on a warm, sunny day, Boston matched its franchise record for consecutive July 4 wins, accomplished from 1901-04 and 1936-39, when teams played doubleheaders.

Tampa Bay had its three-game winning streak halted and lost a road series opener for the eighth straight time. The Rays had just two hits, both singles.

Story put the Red Sox ahead in the fourth, driving a changeup from Josh Fleming (2-4) into the back of Boston's bullpen for his 13th homer.

Crawford (2-2) struck out eight and walked one and John Schreiber got five outs for third save.

The Red Sox added a run in the fifth when Christian Arroyo doubled leading off, advanced on a groundout and scored when Rafael Devers was credited with an infield hit after second baseman Isaac Paredes bobbled his grounder trying to make a backhand pickup. Fleming booted a comebacker with the bases loaded for a run before Cordero's single.

Fleming gave up four runs in five innings of relief.

Boston opened a stretch of 27 games against teams with winning records.

"Just as important as the first 70 or whatever we played," Cora said. "With our ups and downs and, obviously how we struggled early in the season, if you look at the standings, we are where we're at."

In addition to the Rays, Boston faces the Yankees, Houston, Milwaukee, Cleveland and Toronto during the run.

I'LL TAKE CARE OF IT

Tampa Bay's Yandy Diaz got caught rounding first too wide on his bloop hit to right. Crawford, who came in to cover first, took the throw and sprinted after Diaz before making the tag himself.

In addition to Raley and Thompson returning, the Rays recalled LHP Josh Fleming from Triple-A Durham and returned RHP Phoenix Sanders and RHP Javy Guerra there. RHP Cristofer Ogando was optioned to Durham.

Red Sox: LHP Chris Sale (out since spring training, stress fracture in his ribcage) is set to make a rehab start for Triple-A Worcester on Wednesday. "Feels good," Cora said. "One, maybe two more down there." ... Cora also said Wacha would be checked out. "We don't believe there's something structural there, just kind of like a dead arm," the manager said. ... Nathan Eovaldi (injured list, back) and Garrett Whitlock (IL, hip) are both slated to throw off the mound Tuesday.