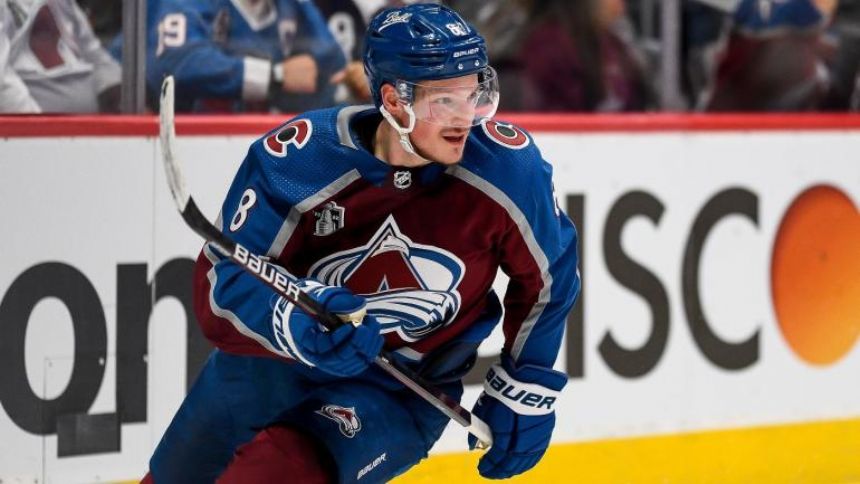 Five years have passed since the 2017 NHL Draft, and hindsight has provided a lot of perspective on the top 10 picks. Not every team hit on its early selection, but that does not mean the draft was lacking talent.

The 2017 draft has produced six All-Stars, likely with more on the way in the coming years. Most notably, Cale Makar just took home the Norris Trophy and the Stanley Cup in 2022. Believe it or not, the Avalanche superstar didn't hear his name called until the No. 4 overall pick in 2017.

Instead, that year, Nico Hischier and Nolan Patrick were the top two picks. While one of those players has panned out fairly well, the other is off to a disappointing start in his NHL career. Looking back on it now, the 2017 draft produced several stars outside of the top-10 picks, and even some outside the first round entirely.

With five years of data at our disposal, we have redrafted the top 10 picks of the 2017 NHL Draft with teams in the exact same order. Here is how it turned out:

Nivison: At the ripe old age of 23, Makar already has a Norris Trophy and a Stanley Cup under his belt. Frankly, it would be pretty surprising if he didn't add more of those to his trophy case by the time he retires. There is no question that he is the best player from the 2017 NHL Draft.

Bengel: This is a no-brainer. Makar has developed into one of the league's top defensemen in a short time. It's not going to be a surprise if Makar produces multiple Norris Trophy-caliber seasons throughout his NHL career. The Devils, Flyers and Stars are probably still kicking themselves for not drafting him.

Nivison: In each of his first two NHL seasons, Pettersson tallied 66 points and he captured the Calder Trophy in 2019. After an injury, Pettersson did bounce back with a career year last season, and he is an elite playmaker when at his best. That is the exact type of player the Flyers need after scoring just 211 goals last season, which was 31st in the NHL.

Bengel: It's safe to say that Nolan Patrick is one of the bigger busts in recent NHL Draft memory. So with Cale Makar off the board, Pettersson makes the most sense in my mind. He is coming off his best professional season with a career-high 68 points (32 goals and 36 assists). In Pettersson, the franchise gets a young forward that they can build around for the foreseeable future and gets some desperately needed goal-scoring prowess.'

Nivison: Miro Heiskanen has been an important piece for the stars since they drafted him in this spot five years ago. However, Robertson is excellent at putting the puck in the net, and those types of players don't come around often. After being drafted No. 39 overall in 2017, Robertson has made many teams look very foolish. Last year, he took his game to another level with 41 goals and 79 points. Robertson is well on his way to superstar status and will be a problem for opposing teams for years to come.

Bengel: Makar and Pettersson seem like no-brainers to go off the board with the first two picks, but here's where this redraft gets interesting. Funny enough, the Stars would probably be choosing between two players that they actually selected in the 2017 Draft in Robertson and defenseman Miro Heiskanen. In this case, the goal scorer wins out with Robertson being the pick. Robertson has 58 goals in two full seasons with Dallas and is primed to build off a 41-goal campaign last season. He'll continue to be a force on the top line for the Stars.

Nivison: In this redraft, the Avalanche missed out on the 2022 Norris Trophy winner, but Miro Heiskanen is still a great No. 1 defenseman in the NHL. Heiskanen doesn't put up the same type of offensive numbers as Makar, but he is still a strong puck-moving defenseman. On top of that, Heiskanen is exceptional when it comes to limiting quality chances for the opposing team, and he has lived up to the billing of a top-five pick.

Bengel:'The Avalanche obviously hit a home run by grabbing now Norris Trophy-winning defenseman Cale Makar in this spot back in 2017. But with Makar now off the board in this exercise, Colorado has to replace his presence on the blue line and Heiskanen is not a bad consolation prize. Heiskanen gives the Avalanche a top-tier defenseman who has also proved his worth on the offensive end of the ice. Sure, he's probably not as electric as Makar, but Heiskanen would be a strong addition to Colorado's roster.

Nivison: It took a few seasons, but Thomas looks like he will be a top-flight player in the NHL for years to come. In his first 169 games, Thomas scored just 22 goals but showed a lot of promise as a playmaker by tallying 65 assists. In 2021-22, that promise came to fruition as he totaled 77 points in 72 games. The Canucks may have missed out on Pettersson in this redraft, but getting Thomas as a replacement is a phenomenal consolation prize.

Bengel:'While the Canucks aren't going to be able to select Pettersson, they're going to take an elite center in Thomas. Thomas' goal-scoring ability may not be quite what Pettersson's is, but he's turned into a phenomenal playmaker in a short period of time. He's registered 122 career assists, including a career-high 57 assists during the 2021-22 season. Having a skilled forward like Thomas centering Vancouver's top line is an opportunity that the franchise wouldn't be able to pass up.

Nivison: Between trading away Marc-Andre Fleury for nothing due to salary cap issues and a season-ending injury to Robin Lehner, the Golden Knights could have used an up-and-coming goaltender in recent years. Jake Oettinger fits that bill. He has had some up-and-downs throughout the regular season, but Oettinger helped carry the Stars to the postseason in 2021-22. Then, he turned in a sparkling performance in the playoffs.

Bengel:'The Golden Knights were delivered quite the gut punch earlier in August when it was revealed that goaltender Robin Lehner would miss the entire 2022-23 season as he recovers from hip surgery. With unproven talent like Logan Thompson and Laurent Brossoit on the roster, the goalie position has to be addressed here. Oettinger just wrapped up his first full season at the NHL level and was downright impressive. In 48 games for the Dallas Stars, Oettinger posted a 30-15-1 record, a 2.53 goals-against-average, and a .914 save percentage. In Oettinger, the Golden Knights would stabilize the goalie position for years to come.

Nivison: Hischier, the No. 1 overall pick in the 2017 NHL Draft, entered the league with lofty expectations. Even though he hasn't fully delivered on those, he is still a very good player that every team in the league would be thrilled to have. He has 78 goals and 206 points in 300 NHL games, and has evolved into a leader for the Devils, becoming the captain in 2021. In this alternate universe, he would be playing for New Jersey's biggest rival and anchoring a formidable forward group.

Bengel: Hischier hasn't quite become the superstar that many expected. For the purposes of this redraft, the Rangers certainly wouldn't need Hischier to be a top-line center since they already have Mike Zibanejad and Vincent Trocheck anchoring their top two lines. Hischier hasn't been a dominant goal scorer, but did record a career-high 21 goals during the 2021-22 season. He would be quite a luxury for the Rangers to have on their second or third line.

Nivison: Suzuki has steadily grown since his rookie season in 2019-20. He posted 41 points in his first two years with the Canadiens, and he took the next step last season with 21 goals and 61 points. The Sabres need some help and excitement these days, and Suzuki would be a great piece down the middle with Alex Tuch and Tage Thompson on his wings.

Bengel:'The Buffalo Sabres don't really have a ton of proven talent through the middle of the ice aside from Thompson. Suzuki would give the Sabres an extremely dependable second-line center. He has really made a living around the net. The jury is still out on center Casey Mittelstadt, who Buffalo picked at No. 8 in 2017, but adding more scoring punch would be a welcome addition to the current Sabres roster.

Nivison: At this spot in 2017, the Red Wings took Michael Rasmussen. Norris offers more upside and potential starpower. Over the last two seasons, Norris has bee a bright spot for the much-maligned Ottawa Senators. The 2021-22 season was the real coming out party for Norris, who found the back of the net 35 times in just 66 games. He is certainly a foundational piece that a franchise can build around.

Bengel: The Red Wings have missed the Stanley Cup Playoffs in each of the past six seasons. But with a youthful roster headlined by 2021-22 Calder Trophy winner Moritz Seider, a bright future is on the horizon. Josh Norris would be quite an addition. Norris lasted until the No. 19 pick and has been one of the few positives for the Ottawa Senators in recent years. For a team that finished 29th in goals last season, Norris would be a welcome addition to the Red Wings top line.

Nivison: Jake Oettinger has gotten a lot of love over the past two seasons, and for good reason. That's what happens when a goaltender is at his best in the playoffs. But Jeremy Swayman played well while splitting starts with Linus Ullmark last season. In 41 appearances, Swayman totaled 7.31 goals saved above average. If the Panthers chose Swayman at this spot in 2017, perhaps they wouldn't have had to commit $10 million per season to Sergei Bobrovsky in the summer of 2019.

Bengel:'Rounding out the top 10 should be a no-brainer for the Florida Panthers. With Oettinger off the board, Boston Bruins netminder Jeremy Swayman, 23, makes sense here. Sergei Bobrovsky will be 34 by the time the 2022-23 season gets underway. With that in mind, they would want to solidify the goaltender position with a young, budding star like Swayman. In 41 games last season, Swayman went 23-14-3 while posting a 2.41 goals-against-average and a .914 save percentage. He is developing into one of the top young goalies in the league and would really be a huge upgrade for Florida at this point.