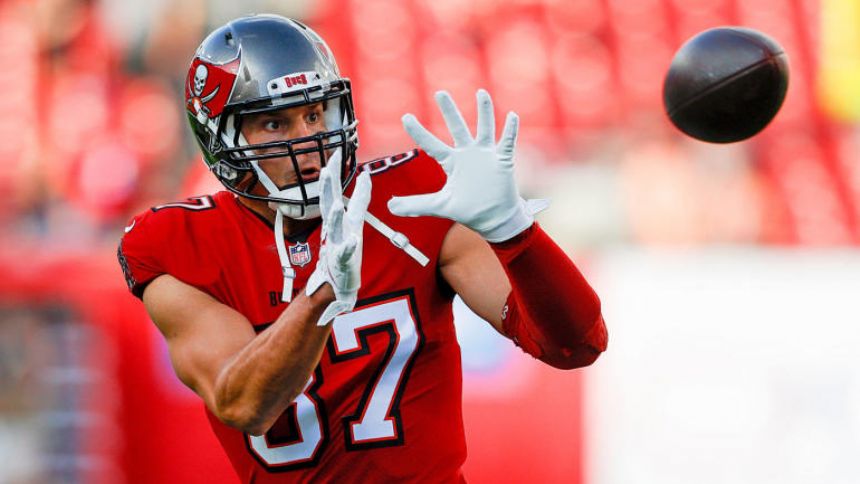 Here were the other award winners from last night:

The Tampa Bay Buccaneers have already been boosted by one retirement and un-retirement this offseason (thanks,'Tom Brady). Now, they'll be hoping for the same from one of his favorite targets.'Rob Gronkowski , writing on Instagram, "[I'm] walking away from football again with my head held high knowing I gave it everything I had, good or bad, every time I stepped out on the field."

This isn't Gronkowski's first retirement. He left the game in 2019, missed the entire regular season, and then reunited with Brady for 2020 and 2021 in Tampa. Gronkowski's agent, Drew Rosenhaus, even admitted .

If Gronkowski is indeed done, though, he leaves as one of the greatest tight ends of all time:

It's hard to overstate Gronkowski's impact. He was a terrific receiver, very good blocker and a constant source of joy both on and off the field. As for the on-field impact, this is a big loss for the Buccaneers. They have five tight ends on their roster. Only one, Cameron Brate, has caught an NFL pass. Three are rookies.

As you read briefly at the top of yesterday morning's newsletter, LIV Golf has reeled in its latest star: Brooks Koepka 'ahead of its event in Portland next week. Let's go a little deeper on this topic today:

Koepka spent much of last week at the U.S. Open . However, it's easy to see why LIV's deep pockets and laidback schedule fit Koepka well. He hasn't played in a non-major event since the end of March, and four of his eight PGA Tour wins are majors (which he'll still be able to play in); he doesn't seem to care as deeply or prepare as much for the other events.'

In a big win for the PGA Tour, however, Collin Morikawa'. The No. 4 player in the world and two-time major winner tweeted

Browns quarterback Deshaun Watson in 20 of the 24 civil lawsuits alleging sexual misconduct against him.

Still, Watson is not out of the woods either legally or regarding a potential suspension from the NFL.

Watson, 26, did not play last season and was in March, shortly after a grand jury decided not to file criminal charges against him stemming from allegations of sexual misconduct. Cleveland immediately gave him a fully guaranteed five-year, $230-million contract.

Caleb Swanigan, the former Purdue'basketball star who played parts of three seasons in the NBA, , Purdue announced yesterday. He was 25.

Swanigan struggled with weight issues in his post-playing days, and he died of natural causes, according to the Allen County coroner's office. He was regarded as a great teammate who did lots of work with youth off the court, and his openness about his upbringing was truly inspiring

Plenty of former teammates and NBA players -- including Jaylen Brown and'Jusuf Nurkic'-- have expressed their condolences.