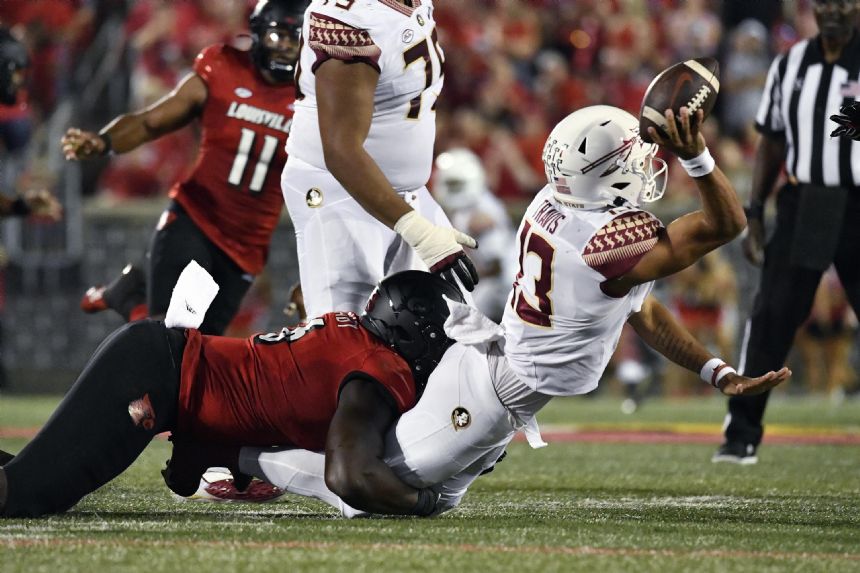 LOUISVILLE, Ky. (AP) - Quarterback Tate Rodemaker came off the bench to lead Florida State to a come-from-behind 35-31 victory over Louisville on Friday night.

The sophomore came in after Jordan Travis suffered a lower left leg injury with a little more than four minutes left in the second quarter and Florida State down 21-14. All the Valdosta, Georgia native did was lead the Seminoles to three, 75-yard second-half scoring drives. The last came with 7:54 left with a sensational 2-yard catch in the end zone by Johnny Wilson that put the Seminoles (3-0, 1-0 Atlantic Coast Conference) up for good.

Rodemaker finished 6-for-10 passing for 109 yards with two touchdowns and an interception while leading Florida State to 260 of their 455 yards. Treshaun Ward added 126 yards on 10 carries for the Seminoles. Wilson finished with seven catches for 149 yards and both touchdowns from Rodemaker.

Louisville (1-2, 0-2) lost despite racking up 495 yards on offense. Malik Cunningham threw for 243 yards on 21-of-34 passing with a touchdown and an interception. The fifth-year senior also added 127 yards rushing and two scores on 17 carries.

The Cardinals had a chance to win the game after Ryan Fitzgerald missed a 36-yard field goal with 1:44 left, but Kevin Knowles II picked off a Cunningham pass at the Florida State 38 with 37 seconds left.

Florida State: Losing Travis, who was on the sideline in the second half with crutches and a boot, for any length of time could be a big blow for the Seminoles. However, for at least Friday night, Rodemaker's heroics were enough to lead the comeback.

Louisville: It may be hard to call the third game of the season a must-win, but given the way the Cardinals season started, Friday's game was one they really needed. The defense that showed up in the second half of the win at Central Florida last week failed to show up when needed in the second half on Friday.