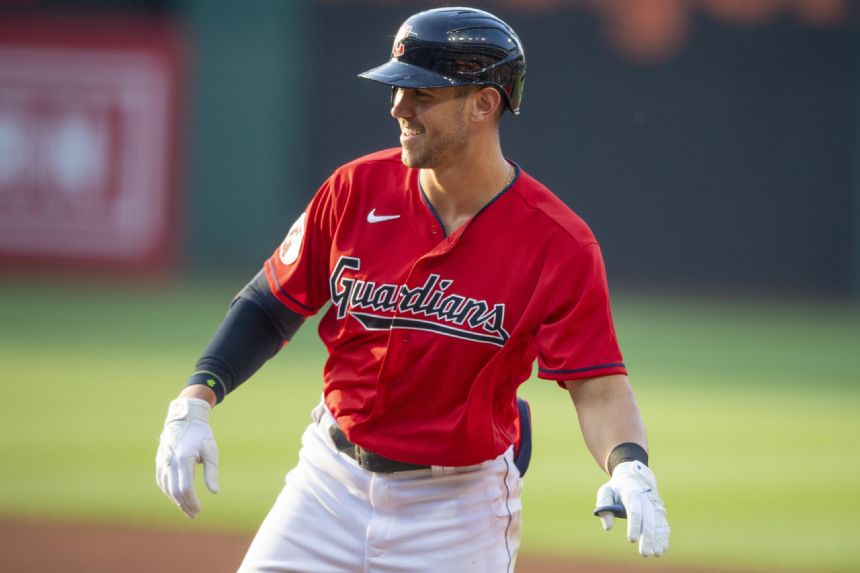 CLEVELAND (AP) - Rookie Nolan Jones drove in four runs in his home debut for Cleveland, leading the Guardians to an 8-4 win over the Chicago White Sox on Monday night in the opener of a four-game series between the AL Central rivals.

A 24-year-old outfielder with a sweet left-handed swing, Jones hit a two-run single in the first inning off Lance Lynn (1-2). He then chased the right-hander by driving home two more runs with a double in the fifth.

Jones is batting .500 (6 for 12) with a homer - a 457-footer that splashed into Kansas City's famous fountains on Saturday - and eight RBIs in four games since coming up from Triple-A Columbus.

Yoan Moncada hit a three-run homer as the White Sox began an eight-game trip leading into the All-Sar break.

Jones, who has climbed through Cleveland's organization since being drafted in 2016, drove in two runs in his first at-bat at Progressive Field, delivering a broken-bat single as the Guardians scored five times off Lynn - all with two outs - in the first.

Cleveland's big inning was triggered by Josh Naylor hustling down the line to beat out an infield single with two down. Franmil Reyes followed with an RBI single and Andres Gimenez walked before Jones, who was called up from the minors on Friday in Kansas City, blooped his single to center to make it 3-0.

In the fifth, Reyes singled and Gimenez, a first-time All-Star, was hit by a pitch before Jones ripped his double to right-center. Straw followed with a hard comebacker that struck reliever Matt Foster and caromed into right field for an RBI.

Moncada's three-run homer in the third pulled the White Sox within 5-3.

Leury Garcia singled with one out and All-Star Tim Anderson singled with two down before Moncada drove a 2-2 cutter from Quantrill over the wall in center for his fourth homer.

Chicago got another closer in the fourth on AJ Pollock's run-scoring single.

La Russa conceded the White Sox haven't played up to expectations. However, he's confident his "very tight" team is united and has the right leaders.

"I like the veterans and I like the way our young guys respond to their responsibilities and their willingness to step forward," he said. "I think it's a terrific mix. ... Everybody has their own opinion. It's like strategy. You win more arguments when you win."

Guardians manager Terry Francona held a meeting in Kansas City on Sunday to introduce the team's three All-Stars - Jose Ramirez, Emmanuel Clase and Gimenez. While Ramirez is making his fourth trip, this will be the first for Gimenez and Clase.

Francona could see the emotion in Clase's face at learning of his selection. Gimenez's teammates erupted when his choice was revealed.

"The place went bananas," Francona said. "In the midst of a really tough road trip, that was a nice minute."

Guardians: Naylor was back in the lineup after being scratched Sunday with lower back discomfort.