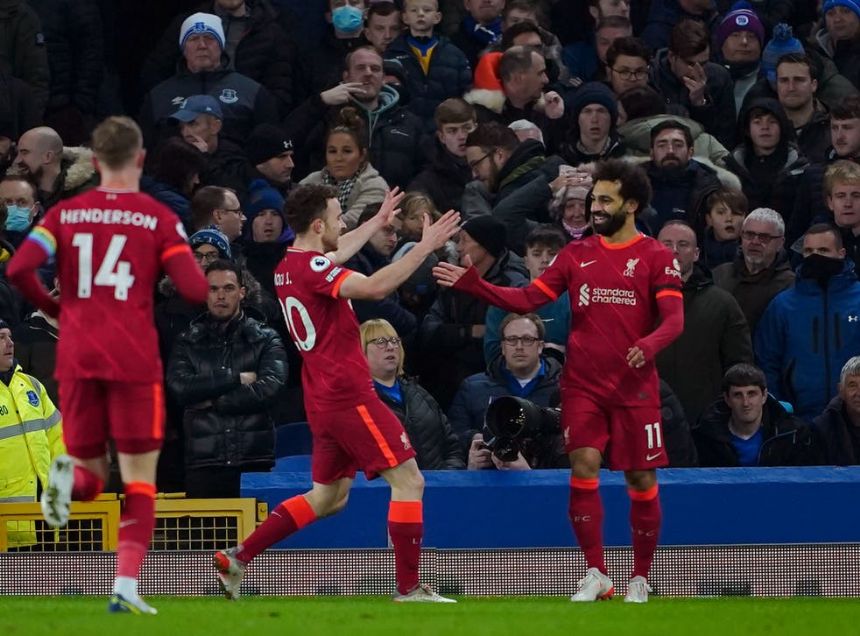 Jordan Henderson and Diogo Jota were Liverpool's other scorers in the 239th Merseyside derby as the Reds became the first top-flight English team to score at least twice in 18 straight matches in all competitions.

Salah is fronting Liverpool's scoring charge and he now has 19 goals in as many appearances this season after his double at Goodison Park.

His first was a beautifully taken curling shot across goalkeeper Jordan Pickford into the far corner in the 19th minute, doubling the lead given to Liverpool by Henderson in the ninth minute off a first-time shot from the edge of the area.

Then, after Demarai Gray pulled a goal back just before half time, Salah seized on bad error by Everton captain Seamus Coleman to race from halfway and apply the finish.

Jota completed the scoring by lashing a shot inside Pickford's near post as Everton's winless run extended to eight matches, with just two points from a possible 24.

Some Everton fans streamed for the exits after Jota's goal. Others stayed and directed their anger toward the directors' box after the final whistle. There were chants of "sack the board" as well as boos at the final whistle,

Third-place Liverpool stayed two points behind leader Chelsea and a point behind Manchester City in what looks like a three-way fight for the title.