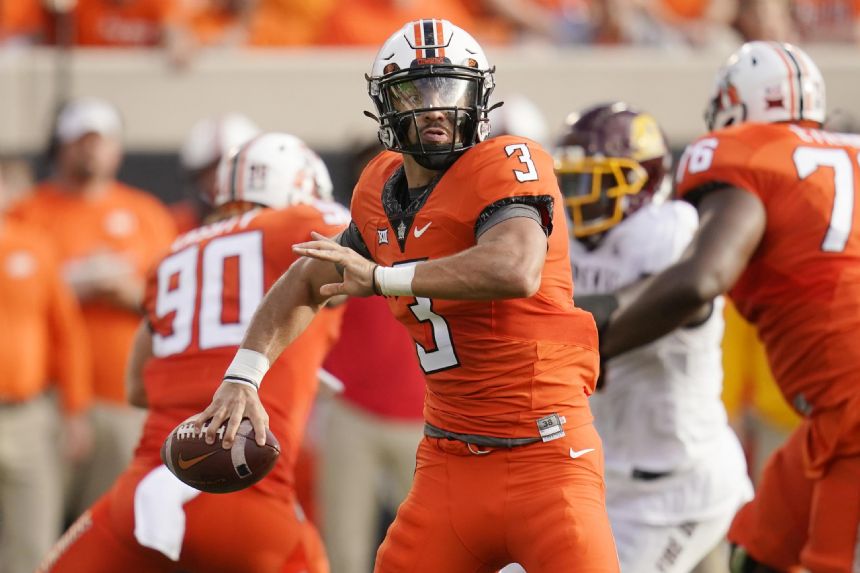 STILLWATER, Okla. (AP) - Spencer Sanders passed for a career-high 406 yards and accounted for six touchdowns and No. 12 Oklahoma State beat Central Michigan 58-44 on Thursday night to give Mike Gundy his 150th coaching victory.

Gundy improved to 150-69 in his 18th season coaching his alma mater.

Sanders matched a career high with four touchdown passes and set a career mark with two rushing scores in the opener for both teams. Braydon Johnson had career highs of six catches for 133 yards and Brennan Presley added five catches for 83 yards.

Sanders passed for 313 yards and three touchdowns in the first half and ran for two more scores to help the Cowboys take a 44-15 lead.

The Cowboys led 51-15 less than a minute into the third quarter before Central Michigan climbed back into the game. Jalen McGaughy's 54-yard touchdown pass from Richardson cut it to 58-44 with 3:15 remaining. McGaughy had six catches for 126 yards and two scores.

Central Michigan gained 546 total yards and outscored Oklahoma State 29-14 in the second half.

Central Michigan: The Chippewas came in with high hopes after going 9-4 last season and beating Washington State in the Sun Bowl. But Sanders was too much for them early, and they couldn't get their running game going well enough to control the clock and slow his rhythm.

Oklahoma State: The defense carried much of the load last season, but the offense put up 531 total yards on Thursday, mostly in the first half. The running game still could use some work, though. Oklahoma State finished with 125 yards rushing on 32 carries, and the Cowboys struggled to put the game away.