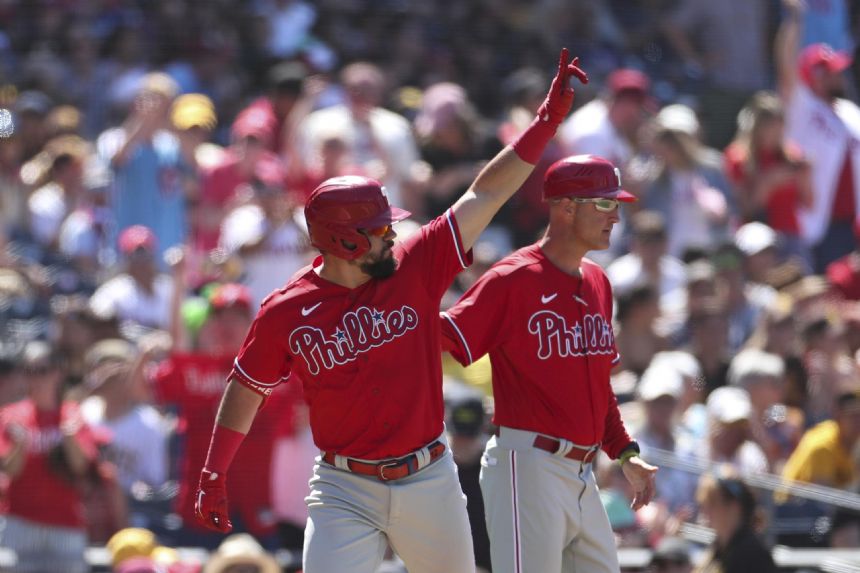 Harper was injured when he was hit by a pitch from left-hander Blake Snell in Philadelphia's 4-2 win on Saturday night. The slugger, who has had a great season while playing mostly at designated hitter because of an elbow injury, is expected to see a specialist after the Phillies return home.

San Diego's Yu Darvish left with a 5-3 lead after striking out a season-high nine in six innings. But reliever Nabil Crismatt (4-1) couldn't hold it after getting into trouble opening the seventh. Bryson Stott walked, Matt Vierling singled and Schwarber, the leadoff batter, drove a 2-1 pitch into the left field seats for the lead. It was his 21st.

Schwarber also had an RBI double in the second for the Phillies, who've won three of four.

Garrett Stubbs, who played at nearby Torrey Pines High School and then at Southern California, singled in an insurance run for the Phillies in the eighth after striking out in his first three at-bats. Matt Vierling scored on a wild pitch in the ninth.

Nick Nelson (2-1) pitched 3 1/3 perfect innings in relief of Kyle Gibson, with two strikeouts. Andrew Bellatti pitched the ninth for his first save.

San Diego went ahead 5-2 in the third on two-run doubles by Austin Nola and rookie C.J. Abrams that knocked out Kyle Gibson. The right-hander allowed three hits, two walks and hit a batter that inning. Overall, Gibson allowed five runs and four hits, walked three and struck out two in 2 2/3 innings, his shortest outing this season.

Darvish allowed three runs and seven hits, with one walk.

The Phillies went ahead in the second on Bryson Stott's RBI single and Schwarber's RBI double.

Phillies: Placed Harper on the 10-day injured list and recalled OF and former No. 1 overall draft pick Mickey Moniak from Triple-A to take Harper's roster spot.

Phillies: RHP Zack Wheeler (6-4, 2.77 ERA) is scheduled to start Tuesday night in the opener of a three-game home series against Atlanta, which will counter with RHP Charlie Morton (4-3, 4.84).