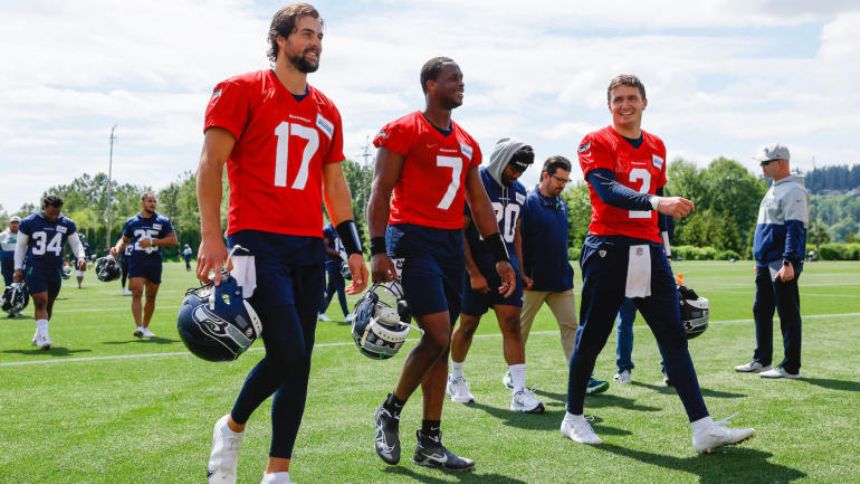 Unless you've been asleep under a rock that also lacks WiFi access, you know Russell Wilson is no longer a member of the Seattle Seahawks. The Pro Bowl quarterback was traded away by the franchise to the Denver Broncos, instantly creating a massive void at the quarterback position in the Pacific Northwest -- one head coach Pete Carroll believes is solved by Drew Lock (included in the trade package) and Geno Smith, along with former fourth-round pick Jacob Eason.

The reality is while Eason is obviously included in the competition as well, all eyes are on Lock and Smith to battle it out for the role of QB1, and the latter isn't conceding anything to the former, regardless of anything. Smith feels he has a very real shot at being the starting quarterback for the Seahawks, and he's won some practice battles already, but Carroll hasn't named his starter yet.

Nor does he plan to anytime soon but, despite ongoing rumors involving Baker Mayfield, Carroll said the Seahawks are fine with who's already in the building.

"They've been really impressive," Carroll said, via ESPN. "And it's not been any one sequence here or one day here. They have just been solid throughout. We've shared a ton of reps. Geno has gone with the first group throughout, but they've had very close to equal reps in situational opportunities throughout.


That said, Smith has been impressive thus far, to the point Carroll isn't afraid to openly admit it (a tactic that will inevitably also play into the psychology of motivating Lock to try and match serve).

"Geno's still ahead -- you can tell that -- but it's not going to be too much for Drew to be caught up," Carroll added. "By the time we get through camp, he'll be there. He's really bright. It makes sense to him. He's really sharp in the huddle and at the line of scrimmage and all of that, so it's just time that he needs ...'

"We're in good shape at the position and we just have to see what happens."'

And when might a starter be identified? Possibly as late as mid-August.

Assuming the Seahawks don't make a move for Mayfield, their starter for 2022 is already on the roster. But while Carroll has no idea who it'll be just yet, he's confident in whomever ascends to the throne as heir to Wilson.'