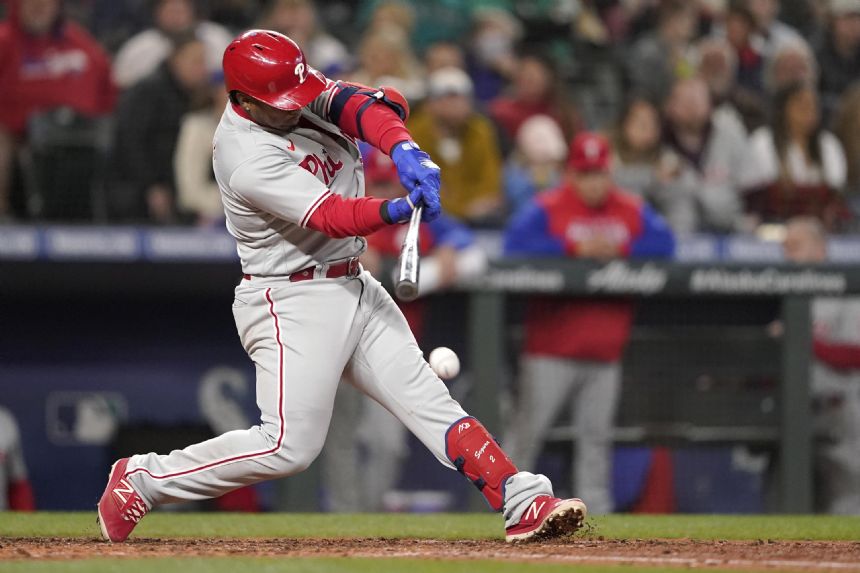 Segura's fourth homer of the season was a line drive out to left-center field against the team he played for in 2017 and 2018. Hoskins followed by golfing a shot down the left-field line off starter Chris Flexen for his third long ball.

Nick Castellanos finished with three hits, including two doubles. Castellanos' RBI double in the fourth was the start of a three-run inning off Flexen.

The Phillies added three more runs off reliever Diego Castillo in the seventh, with Castellanos, Segura and Hoskins all driving in runs. Castillo has allowed nine earned runs in his past three appearances.

The Phillies had dropped five of six before opening their West Coast swing with a victory on their first visit to Seattle since 2017. Philadelphia had a season-high 17 hits.

The Mariners snapped a six-game losing streak with a win over Tampa Bay on Sunday, but the offense remains underwhelming. Seattle has scored three runs or fewer in 10 of its past 13 games.

Rookie Julio Rodriguez was the lone bright spot for Seattle with the second three-hit game of his young career. Aside from Rodriguez, the only other Seattle hit off Suarez was an infield single from Jesse Winker.

Suarez (3-1) struck out a season-high seven in his best performance of the season.

Flexen (1-5) had not allowed more than three earned runs in his first five starts. The six earned runs were the most since last July, when he gave up seven runs to Houston.

Phillies: Manager Joe Girardi said there's no change in the status of RHP Zach Eflin and RHP Zack Wheeler after both were placed on the COVID-19 IL on Sunday. Girardi said neither is expected to be available until the team gets to Los Angeles on Thursday. ... Girardi said he's unsure who will start in Wednesday's series finale in Seattle.

Mariners: SS J.P. Crawford was out of the lineup for a second straight game due to back spasms. Seattle manager Scott Servais said Crawford was feeling better and looking to take some swings pregame with the hope of potentially returning to the lineup on Tuesday.

Phillies: RHP Aaron Nola (1-3, 3.38) looks to snap a personal three-game losing streak and pick up his first win since April 8. Nola has four earned runs over his past 20 innings pitched but has two no decisions and a loss during that stretch.