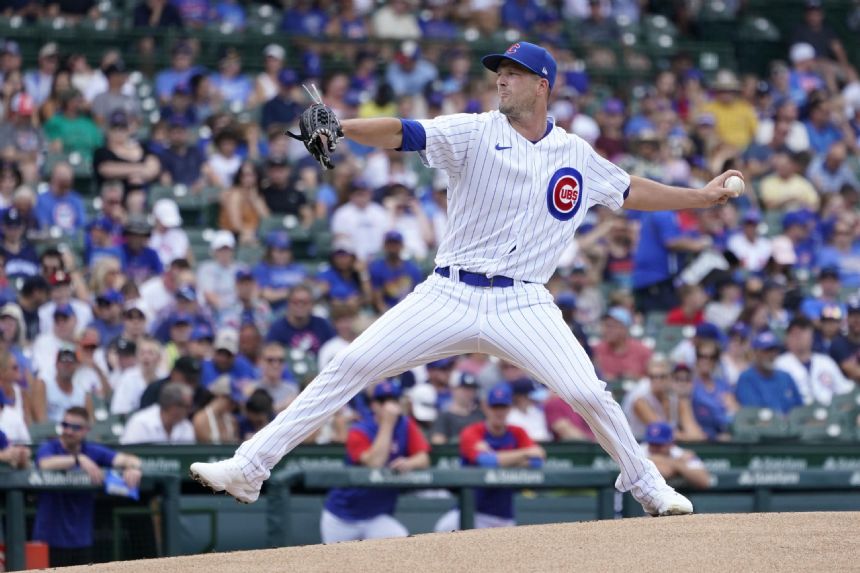 CHICAGO (AP) - Drew Smyly tossed shutout ball into the seventh inning for his first win at Wrigley Field for the Cubs, leading Chicago past the Miami Marlins 4-0 on Saturday.

P.J. Higgins homered and singled, and Nico Hoerner added three hits and an RBI to help the Cubs defeat Miami for a second straight day after losing five straight.

Ian Happ had two hits and scored a run and Willson Contreras had an RBI single. Both All-Stars, Happ and Contreras were the subject of trade rumors before Tuesday's deadline, but remained with Chicago.

The Marlins have lost six of seven and were shut out for the 12th time this season.

Smyly (4-6) finally prevailed at home in his sixth start this season at Wrigley after signing a one-year, $5.25 million contract in March that includes incentive pay and an option for 2023. The 33-year-old righty allowed five hits, struck out four and walked none before being replaced with Mark Leiter Jr. with two outs in the seventh.

Smyly was 11-4 last season for World Series champion Atlanta, but missed six weeks this year with an oblique strain. He returned on July 10 but had struggled since, with a 6.06 ERA in four starts heading into Saturday.

Smyly got some help when the Cubs kept Miami from taking a 1-0 lead in the third with a successful challenge.

Chicago jumped ahead 1-0 in the fourth when Happ doubled and Hoerner singled him home. The Cubs added two more in the fifth.

Higgins led off the sixth with a solo shot just inside the left-field foul pole to chase Lopez.

Happ made a leaping catch off the side wall in left on Joey Wendle's fly to retire Miami in the eighth.

Smyly first signed with the Cubs as a free agent in December 2017, but never pitched for them as he recovered from Tommy John surgery. He was traded to Texas in November 2018.

Chicago reinstated 11-year veteran shortstop Andrelton Simmons from the injured list on Saturday, then designated the four-time Gold Glove winner for assignment before the game

Simmons signed a $4 million deal with the Cubs in March and appeared to be slotted for a regular role. But the 32-year-old appeared in just 34 games because of two right shoulder injuries, batting .173 with seven RBIs.

Simmons hadn't appeared in a game with Chicago since July 10 against the Dodgers but had just completed a rehab assignment with Triple-A Iowa.

Marlins LF Peyton Burdick singled in the third for his first hit in the majors. He made his major league debut on Friday and fanned three times.

Cubs: Rookie Christopher Morel left the game with right hamstring tightness after breaking an 0-for-25 slump with a single in the fifth and scoring. He's day-to-day.

Miami LHP Jesus Luzardo (2-4, 3.97 ERA) faces Chicago RHP Adrian Sampson (0-2, 3.74) on Sunday. Luzardo allowed two runs and struck out five in five innings against Cincinnati last Monday, in his first big league outing since May 10. The 24-year-old lefty had been sidelined by a left forearm strain.