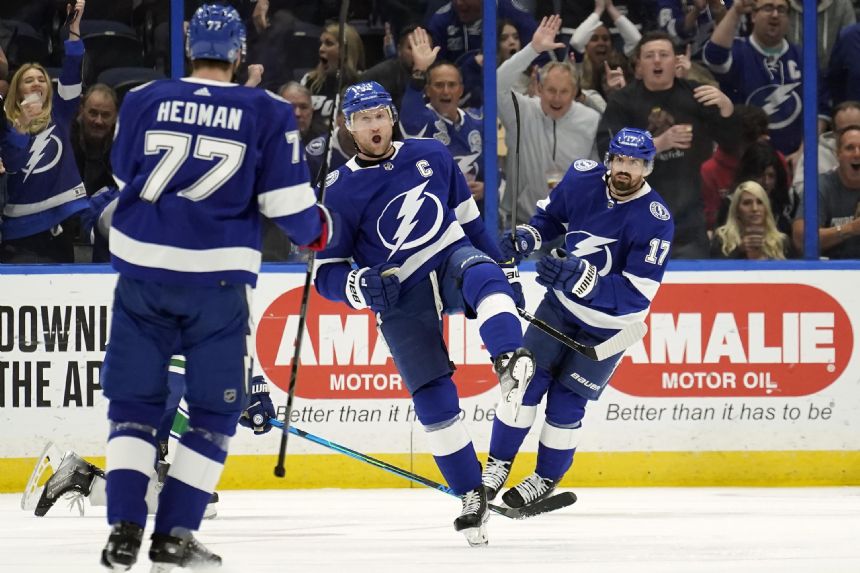 Anthony Cirelli, Boris Katchouk and Brayden Point also scored for Tampa Bay. Katchouk made it 3-1 at 11:24 of the third during a 2-on-0, and Vasilevskiy stopped Elias Pettersson's breakaway shot after the ensuing faceoff.

Matthew Highmore and Tyler Motte each had a goal and an assist, and Thatcher Demko stopped 17 shots for the Canucks, who are 8-2-1 since Bruce Boudreau replaced Travis Green as coach last month. Vancouver ended a nine-day break due to COVID-19 protocols with a 5-2 loss Tuesday night at Florida.

Motte cut the Canucks' deficit to 3-2 with 4:14 to play when he put the puck between his legs and lifted it over Vasilevskiy.

Point iced the game with an empty-netter.

Tampa Bay took a 2-1 lead with 20.7 seconds left in the first on Cirelli's in-close backhander.

Stamkos opened the scoring during a power play from the left circle 3:16 into the game. The Lightning captain tied Jean Beliveau and Ray Bourque for 30th place all-time with 173 power-play goals. The only active player with more is career leader Alex Ovechkin with 275.

Highmore tied it at 1 at 12:05 of the first with his first goal this season. The center was playing in his fourth game after missing 24 due to an upper-body injury.

Stamkos scored his 457th goal, breaking a tie for 57th on the career list with Alex Delvecchio. ... Vancouver defenseman Oliver Ekman-Larsson had five shots on goal, but his goal drought reached 15 games. ... Victor Hedman picked up his 32nd assist and just missed (39 points, 39 games) becoming the first Tampa Bay defenseman to reach 40 points in under 40 games.

Canucks: Left wing Phillip Di Giuseppe was activated from COVID-19 protocols and assigned to Abbotsford of the AHL.