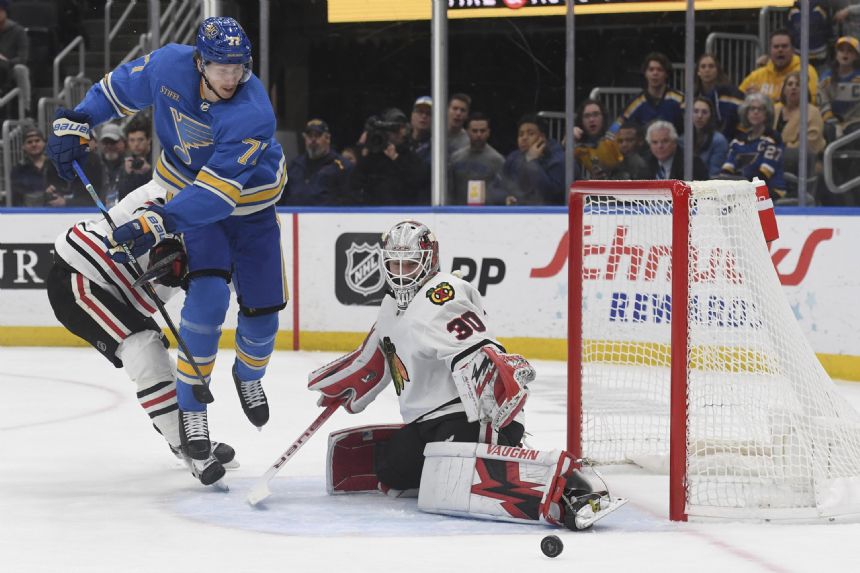 Stauber, 23, joined Chicago on an emergency recall Thursday. Stauber signed last year after a standout career at Providence College. He's played in 12 games this season with the Rockford IceHogs of the American Hockey League, going 6-4 with a 3.06 goals-against average and a .896 save percentage. He is the son of former NHL goaltender Robb Stauber, who played five seasons in the NHL with the Los Angeles Kings and Buffalo Sabres.

The Blackhawks have won six of their last seven games. The loss snapped the Blues' four-game winning streak against Chicago. St. Louis had beaten the Blackhawks six straight times at home dating back to Nov. 14, 2018.

Chicago scored on its first two shots on goal. Dickinson scored at 10:27 of the first period on a quick-developing 2-on-1 for a 1-0 lead. The Blackhawks made it 2-0 at 13:20 with a short-handed goal by Lafferty after being fed by Dickinson for a breakaway, beating Jordan Binnington through the five-hole. Lafferty used his speed to assist on Dickinson's goal.

Each team scored twice in the second period. Chicago went up 3-0 at 2 minutes in the second period when Johnson got behind Calle Rosen and tapped in the puck after getting a pass from Colin Blackwell. St. Louis came back less than a minute later with a power play goal when Kyrou scored on a wrist shot at 2:54. Athanasiou scored at 3:59 for a 4-1 Chicago lead.

That was it for Binnington, who allowed four goals on seven shots. Backup Thomas Greiss came in to play.

Each team scored a goal in the final period. Leddy's first goal of the season came at 9:15 and pulled the Blues within one at 4-3. Domi got the goal back at 16:01.

Blues LW Logan Brown has been activated off injured reserve but he was a healthy scratch for Saturday's game. ... Sent C Nikita Alexandrov to AHL's Springfield Thunderbirds, ending a stint in the NHL in which he played seven games with two goals and one assist. ... RW Vladimir Tarasenko (hand), D Torey Krug (lower body), D Robert Bortuzzo (lower body), D Marco Scandella (hip) all participated in the Saturday morning optional skate for the Blues. None played in the game.