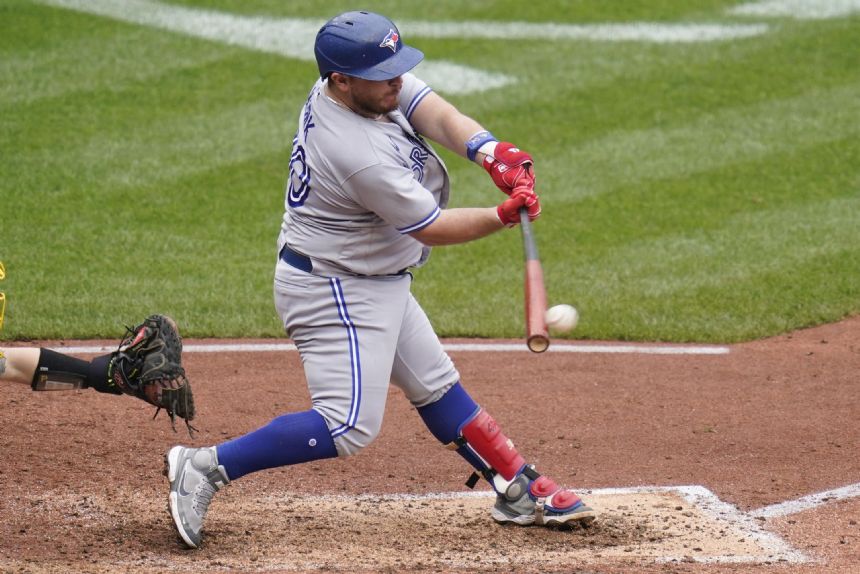 PITTSBURGH (AP) - Teoscar Hernandez delivered the go-ahead RBI single in the seventh inning and the Toronto Blue Jays edged the Pittsburgh Pirates 4-3 on Sunday to complete a three-game sweep.

Hernandez lined a shot up the middle against Duane Underwood Jr. (1-5) with two outs to push Toronto in front and the bullpen did the rest. The Blue Jays improved to a season-best 14 games over .500 (73-59) to maintain their hold on the third and final wild-card spot in the American League.

Toronto begins a four-game series against surprising Baltimore - which is chasing the Blue Jays for a postseason berth - starting Monday at Camden Yards.

Hernandez and Christian Kirk had two hits apiece for Toronto, which has won five of six and 12 of 17. Cavan Biggio hit his fifth home of the season and second in five days for the Blue Jays.

Ross Stripling (7-4) allowed three runs on two hits with three walks and eight strikeouts in six innings as Toronto improved to 6-1 in Stripling's last seven starts dating to July 13. The Pirates put runners on second and third with no outs against Blue Jays closer Jordan Romano in the ninth. Romano settled down to strike out the next three batters to collect his 30th save.

Rookie shortstop Oneil Cruz hit his 12th home run for the Pirates, a lined shot to the bullpen beyond the centerfield wall with one out in the fifth that tied the game at 3. Josh VanMeter added a two-run double for Pittsburgh, but the Pirates mustered little else.

Pittsburgh, which was assured of a fourth straight losing season with a loss on Friday, has dropped four straight and is 11-34 over its last 45 games.

Underwood, who took the loss on Saturday night after giving up a bases-clearing triple to Bo Bichette, struggled for a second straight appearance. Danny Jansen and Matt Chapman singled to start the seventh.

Underwood caught a break when Vlad Guerrero Jr. grounded into a double play but Hernandez followed with a clean single up the middle to put Toronto in front. Only a spectacular diving catch by Pittsburgh rookie outfielder Jack Suwinski on a sinking liner to the gap in left-center prevented the Blue Jays from breaking it open.

Blue Jays: Start a four-game set on the road against the Orioles with a doubleheader on Monday. The two teams, who entered Sunday separated by 1 1/2 games in the race for the AL's third wild-card spot, are scheduled to meet in three series over the final month of the season. Baltimore holds a 6-3 edge against Toronto in 2022.