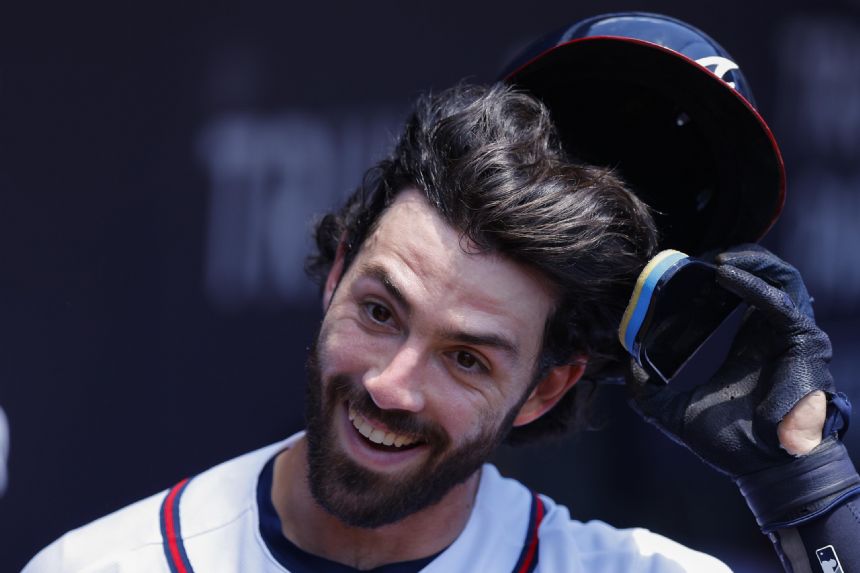 ATLANTA (AP) - Dansby Swanson hit two home runs and the Atlanta Braves built a big lead early before holding off the San Francisco Giants 7-6 Thursday for their 18th win in 21 games this month.

Swason had three hits and drove in three runs. He hit a leadoff home run in the first and connected again in the fourth, his 12th, for a 7-1 lead. It was his seventh career multihomer game.

The defending World Series champion Braves moved 11 games over .500 for the first time this season.

San Francisco, which grounded into four double plays in the first four innings, has dropped four of five.

Cody Bellinger, Max Muncy, Will Smith and Justin Turner also homered for the NL West-leading Dodgers, who outscored the Reds 52-18 in winning all seven games against them this year.

The Dodgers now travel to Atlanta, where Freeman was the longtime face of the franchise and helped the Braves win the World Series last year.

Kershaw (5-1) allowed one run and seven hits in six innings. He struck out seven, leaving after 80 pitches and lowering his ERA to an even 2.00.

MINNEAPOLIS (AP) - Nick Gordon hit a third-inning home run that stood up for starter Devin Smeltzer, and Minnesota cooled off Cleveland to dodge a sweep.

Gordon drove a 1-2 curveball from Zach Plesac (3-4) into the grass berm beyond the wall in center.

Smeltzer (4-1) cruised through six innings, allowing only two singles and one double while striking out three.

The Guardians stranded runners against Minnesota's struggling bullpen in each of the last three innings. Caleb Thielbar recorded his first save by striking out pinch-hitter Steven Kwan to end the game.

Cleveland lost for just the fifth time in its last 22 games.

PITTSBURGH (AP) - Michael Chavis hit a tying home run in the eighth before pulling off a defensive gem and delivering a game-ending single in the 10th, sending Pittsburgh over Chicago.

Chavis' solo homer made it 7-all after the Cubs scored five times in the top of the eighth.

In the 10th, Chavis charged a slow grounder by Jason Heyward toward first base and threw out Patrick Wisdom at the plate.

In the bottom half, Chavis blooped a single to right off Scott Effross (1-3) and automatic runner Ke'Bryan Hayes scored in a collision with catcher Wilson Contreras.

MIAMI (AP) - Avisail Garcia drove in the go-ahead run on a fielder's-choice grounder in the eighth inning, and Miami completed a three-game sweep of Colorado.

Four relievers combined to throw 4 1/3 scoreless innings for the Marlins, including Steven Okert (5-0), who pitched a scoreless eighth to pick up his second win of the series.

Tanner Scott struck out the side in the ninth for his seventh save.