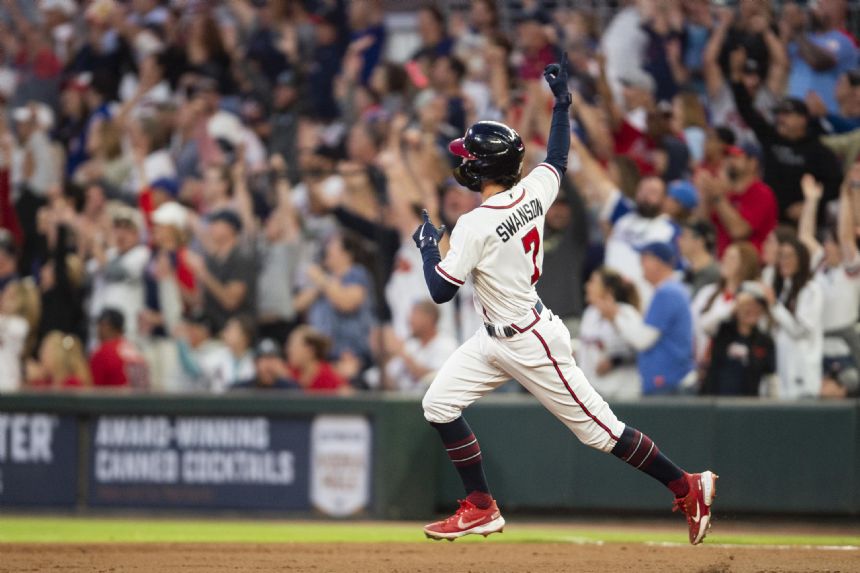 The defending World Series champion Braves swept the three-game series and moved two games ahead of New York in the NL East. Any combination of one Atlanta win or one Mets loss would give the Braves their fifth straight division title.

New York plays its final games of the season against Washington, who is last in the division. Atlanta goes to Miami. Should the season end Wednesday in a tie, Atlanta would win the NL East, because the Braves won the season series 10-9.

The Braves won five of the last six games in the series, outscoring the Mets 42-19 over that stretch. New York had a 10 .5-game lead on June 1 but now is the lower in the standings than at any point this season.

It was a lost weekend for New York, which came to Atlanta hoping to clinch its first division title since 2015. Instead, aces Jacob deGrom and Max Scherzer lost Friday and Saturday before 15-game winner Chris Bassitt lasted just 2 2/3 innings on Sunday.

Swanson took Bassitt deep to right-center in the first with his 25th homer, and Atlanta took charge with a three-run third. Bassitt (15-9) issued a bases-loaded walk to Olson before d'Arnaud delivered a single up the middle to score Ronald Acuna Jr. and Austin Riley for a 4-3 lead. That chased Bassitt, who was charged with four runs, three hits and three walks.

Olson connected for his 33rd homer to make it 5-3 leading off the sixth, his 410-foot shot landing in the seats in right-center. Olson, in his first year with Atlanta, surpassed 100 RBIs for the second straight season.

Jeff McNeil went deep off Morton in the third and Vogelbach followed with an RBI single to put the Mets up 3-1. Morton entered the game having allowed 28 homers, sixth-most in the NL.

Morton scuffled throughout his start, giving up three runs and nine hits in 4 1/3 innings as the 38-year-old made his first start since signing a $20 million, one-year contract to remain with Atlanta next season.

Dylan Lee (5-1) relieved Morton and pitched 1 1/3 innings, leaving after a walk to Brandon Nimmo with two outs in the sixth. Collin McHugh entered and struck out Francisco Lindor.

Raisel Iglesias faced four batters in the seventh, A.J. Minter faced the minimum in the eighth and closer Kenley Jansen converted his third save of the series with a clean ninth.

Jansen leads the NL with 40 saves in 47 chances.

Atlanta leads the NL with 241 homers. And the Braves have their first 100-victory season since 2003.

McNeil went 3 for 5 and has multiple hits in five straight games. His average is .326, one point behind the Dodgers' Freddie Freeman for the NL batting title. In 23 career games at Truist Park, McNeil is hitting .395 with 12 runs, nine doubles, two homers, seven RBIs and four walks. ... Jansen tied Hall of Famer Dennis Eckersley for eighth place on the career list with 389. He's also is the 10th closer to have four different seasons with at least 40 saves.

Mets All-Star RF Starling Marte (right middle finger fracture) has yet to begin swinging or throwing. ... Braves 2B Ozzie Albies (broken right pinky finger) is still wearing a cast. ... Braves RHP Spencer Strider still has not thrown as he gets treatment on a sore left oblique.