Tagovailoa, Dolphins rally from 21 down to beat Ravens 42-38 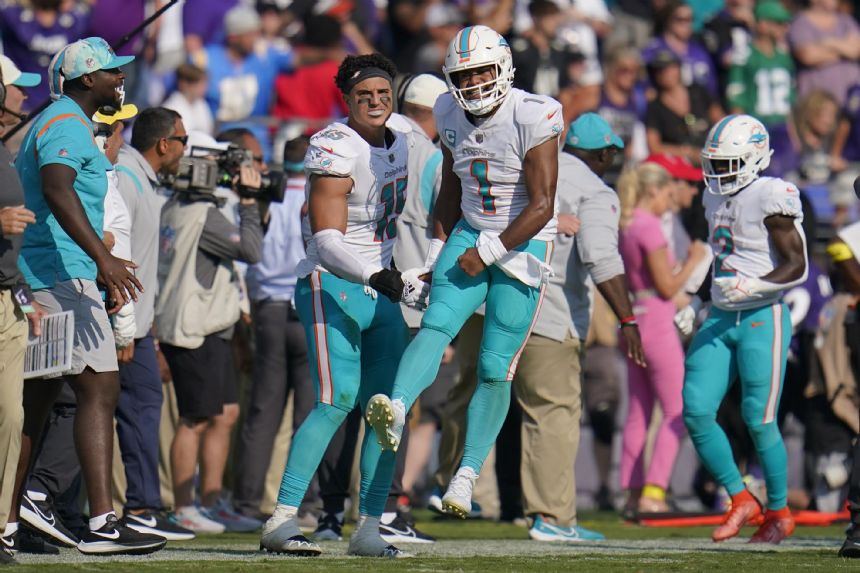 BALTIMORE (AP) - Tua Tagovailoa threw for 469 yards and six touchdowns, four of which came during a spectacular fourth quarter, and the Miami Dolphins rallied from a 21-point deficit to beat Lamar Jackson and the Baltimore Ravens 42-38 on Sunday.

Tyreek Hill had touchdown catches of 48 and 60 yards during that rally, the latter of which tied the game with 5:19 to play.

Justin Tucker kicked a 51-yard field goal with 2:18 remaining to put Baltimore ahead, but that was far too much time for Miami's offense, which the Ravens (1-1) didn't come close to stopping in the final quarter.

The Dolphins overcame a spectacular performance by Jackson, who threw three first-half touchdown passes and then gave Baltimore its 21-point lead with a 79-yard TD run in the third. Jackson threw for 318 yards and three touchdowns.

The Ravens got into position for Jackson to throw a desperation pass at the very end, but that fell incomplete.

Tagovailoa was intercepted twice in the first half, but he more than made up for that. Waddle had 11 catches for 171 yards and two touchdowns, and Hill had 11 for 190 yards and his two TDs.

Devin Duvernay returned the opening kickoff for a touchdown, and the Ravens never trailed until the final seconds.

They would have scored a TD on all four of their offensive possessions in the first half if not for a fumble near the Miami goal line.

The Dolphins couldn't recreate their exceptional defensive effort of a season ago, when their blitz wreaked havoc on the Baltimore offense. The Ravens lost that game 22-10 in their lowest-scoring game of the season.

Jackson put the Ravens up 14-7 with a short pass over the middle that Rashod Bateman turned into a 75-yard touchdown. Later in the second quarter, he threw for TDs of 1 yard to Mark Andrews and 12 yards to Demarcus Robinson.

Then Jackson's most spectacular play came near the end of the third, when he faked a handoff and breezed through a big hole up the middle and past the Miami secondary. The touchdown was the longest run of Jackson's career, and it also put him over 100 yards rushing, a record 11th time he's done that. He previously shared the mark for quarterbacks with Michael Vick, who had 10 100-yard games on the ground.

Jackson became the first quarterback in NFL history with both a touchdown pass and a touchdown run of at least 75 yards in the same game. He finished with 119 yards on nine carries.

Duvernay, who caught two touchdown passes in a season-opening win over the New York Jets, showed why he's been an All-Pro returner, taking the kickoff 103 yards to open the scoring. Tagovailoa drove the Dolphins into Baltimore territory, but Marcus Williams created a turnover with a remarkable display of concentration. He jumped in front of Hill to break up a pass, and while lying on the ground, he reached out to catch the falling ball before it hit the ground.

The Ravens drove to the 1-yard line, but after a third-down touchdown run by Jackson was overturned on replay, the Baltimore quarterback lost control of the ball on what looked like a quarterback sneak attempt on fourth down.

Miami drove 94 yards and tied it at 7 on Tagovailoa's 6-yard touchdown pass to Waddle.

With the Ravens up 21-7, Tagovailoa's deep pass was picked off - again by Williams - and that gave Baltimore a chance to score once more before halftime.

Tagovailoa threw a 14-yard touchdown pass to Mike Gesicki to make it 28-14 in the third, and his 2-yarder to River Cracraft in the fourth made it 35-21.

Baltimore LB Steven Means was carted off in the second quarter with an ankle injury, and Duvernay entered concussion protocol late in the game.

Ravens: At the New England Patriots on Sunday.