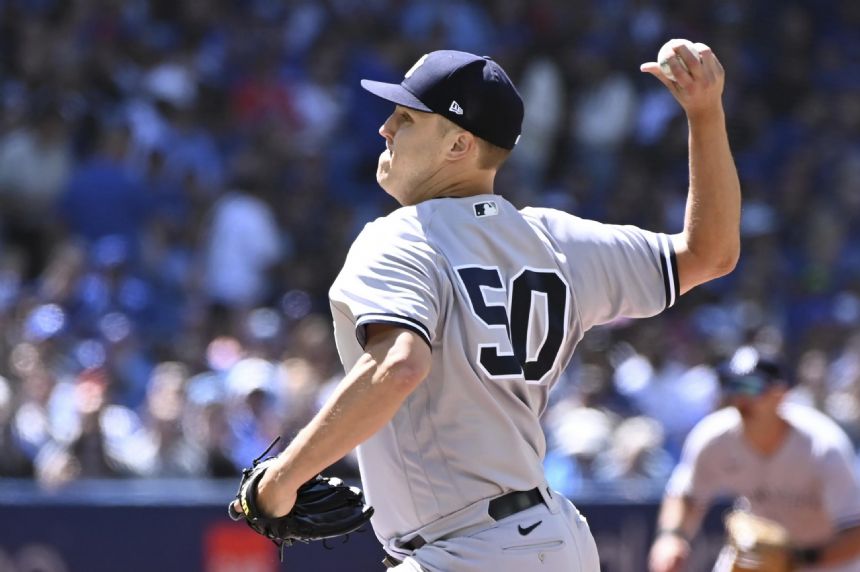 Taillon (8-1) allowed four hits and struck out eight in 5 2-3 innings to win his eighth straight decision.

Michael King worked two innings and Clay Holmes got the final four outs. The Yankees pitched their 11th shutout of the season and improved to a major league-best 49-16.

Toronto put runners at second and third with one out in the second inning, but Taillon retired the next eight batters in a row.

Alek Manoah (8-2) lost for the first time in 16 career home starts, disappointing a sellout crowd of 45,055. Manoah came in 2-0 with a 1.52 ERA in four career starts against New York, but allowed four runs and six hits in 5 1/3 innings. He walked one and struck out five.

Anthony Rizzo drew a one-out walk in the Yankees fourth, Gleyber Torres followed with a single and, after Joey Gallo struck out, Isiah Kiner-Falefa beat out an infield hit to load the bases for Hicks, who doubled to right.

For Hicks, it was his first extra-base hit in a bases-loaded situation in more than five years, and the Blue Jays were the opponent the previous time he did it. Hicks had a career-best six RBIs as the Yankees won 12-2 in Toronto on June 1, 2017.

After a mound visit, Manoah hit Jose Trevino with a pitch and the Yankees catcher was awarded first base. Blue Jays manager Charlie Montoyo came out to argue that Trevino had swung at the pitch and was ejected for the fourth time this season.

The Yankees had an 11-game winning streak from April 22 to May 3. That run ended with a loss to left-hander Yusei Kikuchi in the finale of a three-game series in Toronto. Kikuchi starts for the Blue Jays on Sunday.

Yankees: LHP Aroldis Chapman (left Achilles tendinitis) was scheduled to throw live BP at New York's spring training complex in Tampa, Florida, on Saturday, manager Aaron Boone said. If he feels good, Chapman will throw another live BP session while the Yankees are in the Tampa area visiting the Rays next week.

Blue Jays: Toronto said LHP Hyun Jun Ryu had Tommy John surgery. He is signed through 2023 but will need 12-18 months to recover. ... The Blue Jays put RHP Trevor Richards (strained neck) on the 15-day IL and recalled LHP Matt Gage from Triple-A Buffalo. ... SS Bo Bichette (right foot) returned to the lineup after sitting out Friday. Bichette left Thursday's game one inning after fouling a pitch off his foot.

When Judge's bat broke on an infield grounder in the fourth, the barrel sailed out of the infield and landed in shallow left.

New York signed INF Chris Owings to a minor league contract and assigned him to Triple-A Scranton/Wilkes-Barre. The Orioles released Owings on Monday.

Taillon walked more than one batter for the first time in 13 starts this season. ... George Springer walked twice against Taillon and finished with three walks.

Saturday marked the 45th anniversary of the 1977 Fenway Park clash between late Yankees manager Billy Martin and star right fielder Reggie Jackson. After Martin substituted Jackson for not hustling in the outfield in a nationally televised game, the two nearly came to blows in the visitor's dugout.

RHP Luis Severino (4-1, 2.80) returns to the mound for New York Sunday after being scratched from Thursday's start due to illness. Kikuchi (2-3, 4.80) starts for the Blue Jays. The left-hander is winless in five starts.