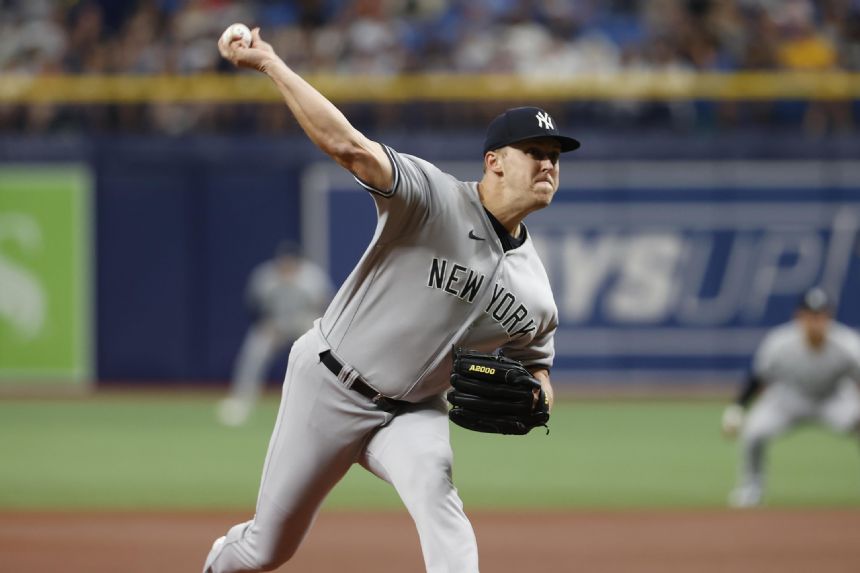 Gleyber Torres put the Yankees ahead with a homer in the fourth off Jeffrey Springs (2-2) and Matt Carpenter, in his second game with New York, homered later in the inning.

New York opened a 6 1/2-game lead over the Rays by winning the first two games of the four-game series. The Yankees won their fourth straight following a season-worst three-game losing streak and improved to 33-13, the best start in the major leagues since the 2001 Seattle Mariners opened 34-12.

Taillon (5-1) improved to 5-0 with a 2.20 ERA in his last seven starts, striking out five and walking none while throwing 62 of 93 pitches for strikes. The 30-year-old right-hander had not gotten an out in the eighth inning since Aug. 7, 2018, for Pittsburgh at Colorado, when he pitched his second big league complete game.

Taillon was sidelined from May 1, 2019, until the start of the 2021 season while recovering from his second Tommy John surgery.

Taillon retired his first 12 batters before Randy Arozarena's leadoff single in the fifth. Manuel Margot stretched his hitting streak to 13 games with a sixth-inning double.

Clay Holmes struck out two in a perfect ninth for his sixth save in six chances, extending his scoreless streak to 24 innings and finishing the game in 2 hours, 23 minutes.

New York has pitched six shutouts, one shy of the big league high.

Torres led off the fourth with his eighth homer, one shy of his total for all of last season. One out later Carpenter hit first major league home run since April 30 last year.

Carpenter signed with the Yankees on Thursday and got his second straight start due to Aaron Hicks remaining sidelined by right hamstring tightness.

Springs gave up two runs and five hits in six innings in his second major league start. The 29-year-old left-hander had given up one homer in 30 1/3 innings this year before allowing the pair in the fourth.

Yankees: 3B Josh Donaldson (right shoulder inflammation) was placed on the 10-day IL retroactive to Tuesday. The 36-year-old third baseman had been on the COVID-19 IL and has not played since Sunday. Because the COVID-19 list does not count against the 40-man roster, the Yankees opened a roster spot by tranferring Chad Green (Tommy John surgery) to the 60-day IL. ... DH Giancarlo Stanton (right calf strain) has resumed hitting, and manager Aaron Boone said Stanton might spend the minimum 10 days on the IL. ... DJ LeMahieu was out of the starting lineup for the fifth consecutive game because of his left wrist, which had a cortisone shot.